Music and More For The Long Drive (Pt 1)

I just came back from two long car trips in the space of three days.  Happily, the weather was good, I had the opportunity to drive through the Adirondack Mountains, and there were few, if any, road blockages. I packed the car with CDs as well as podcasts I wanted to catch up on (posted to my phone).  Over the next two posts, I will recommend a number of those albums.

First, though, I have a podcast to recommend. 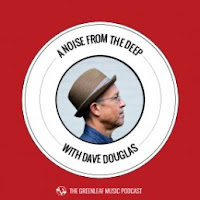 I have been listening to trumpeter and composer Dave Douglas's podcast since "A Noise From The Deep" made its debut six-and-a-half years ago (Henry Threadgill was his guest on the premiere). Douglas has a wide array of musicians on the show, ranging from fellow trumpeters (Keyon Herrold, Charles Tolliver, Jaimie Branch, to name just three) to saxophonist Joe Lovano to guitarist Mary Halvorson and many more.  The host and guests really dig into the music and, while there is often technical talk, the shows usually are quite fascinating. Podcast #68, a delightful conversation with master percussionist Andrew Cyrille, is the one I listened to on the ride. If you love creative music, you should check out these conversations.

For more information, go to greenleafmusic.com/anftd-68-andrew-cyrille/. 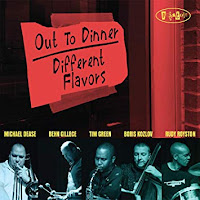 Producer Marc Free has, over the past year or so, been putting groups together that pair Posi-Tone artists who may or may not have worked with each other into an ensemble for a recording session.  To the producer's credit, none of the groups – including Lioness, New Faces, and Maximum Enjoyment – have sounded anything less than stellar.  I had the opportunity last year to see New Faces, a sextet than includes saxophonist Roxy Coss, trumpeter Josh Lawrence, pianist Theo Hill, bassist Peter Brendler, drummer Vinny Sperrazza – who couldn't make the live gig - and vibraphonst Behn Gillece.  Gillece, who has an extensive discography on the label, really stood out for me, increasing my appreciation for both his compositions and musicianship.

The vibraphonist (pictured left) can now be heard as part of the quintet known as Out To Dinner.  Along with trombonist Michael Dease, alto saxophonist Tim Green, bassist Boris Kozlov, and drummer Rudy Royston (need I write more), the band has created "Different Flavors", a 10-song program (five composed by Gillece) that is quite tasty and, ultimately, filling.  Opening with the mellow "Day Zero", it's fun to listen to how Royston plays melodically while rushing the band forward.  There's a mellow, Horace Silver-flavored, melody which opens up to excellent solos.  My car speakers rattled gleefully when Dease's "Skittles" played, a rollicking piece with an impossible tempo (dig Kozlov's "running" bass lines) that must have fun to play and is certainly fun to listen to. Near the close of the piece, the drummer erupts with a volcanic solo and you'll just might scream for joy (I did)!

It's not all "shock and awe" – Wayne Shorter's "Rio", first recorded by trumpeter Lee Morgan for the album "The Procrastinator" (released posthumously), is a lovely medium-tempo ballad.  Dease takes the early lead, supported by the colors of the vibes and Kozlov's counterpoint.  When Green's keening a lot joins the melody, it sets the stage for a lyrical solo by the alto player. Royston contributes a handsome ballad; titled "Night Glow", the listener gets treated to the drummer's excellent snare-and-snare work (he has such a crisp sound) plus strong solos from both Green and Dease.

"Different Flavors" closes with Gillece's "Two Down". The opening actually sounds like the perfect ending (listen closely).  Thanks to the dancing qualities of the rhythm section, the track rushes forward with a such delightful spirit.  The rhythm section swings lustily in support of the alto solo; right near the close, Royston takes a short solo that reminds one why he plays with so many different artists – hard to sit still listening to such a joyous noise. Have no reservations about making a reservation to spend time with Out To Dinner – this music sounds and tastes really good! 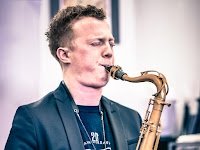 For his fifth album as a leader (and first for Ropeadope Records), tenor saxophonist and composer Adam Larson, a native of Normal, IL, returns to the studio with long-time collaborators Fabian Almazan (piano, electric piano, synth) and Jimmy Macbride (drums).  Joining them for "Listen With Your Eyes" is electric bassist Matt Clohesy.  The music they produce hearkens back to Larson's previous albums, especially in the sructure of the songs and the leader's fine solos, but now one can hear the influence of rock music in the power created by the rhythm section as well the heavier approach of groups such as Chick Corea's electric Returns To Forever (not as manic as RTF's mid-70 recordings . 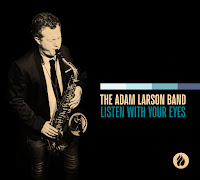 Larson's album opens with "Sleepers", a powerful piece with a rising chord pattern, acoustic piano, thick bass notes, and exciting drum work.  First few times through, the saxophone work reminded me of Donny McCaslin – that's fine because, as one becomes more familiar with the music, the influences drop away.  "False Pageantry" follows; with its "heavier" beat, electric keys, and rhythmic melody line, the music charges forward with Macbride in the lead amidst Almazan's "chirping" keyboards and Larson's hard-edged solo.  "Bright" appears later in the program, a soulful melody with a jaunty rhythm and listen to the thick bass notes bouncy behind he electric piano solo.  The title track opens like a variation of the standard"Stout-hearted Men" but, instead of being a brace call to arms, the song asks for the attention of all your senses, not just your hearing.  After a fine bass solo, Almazan's powerful statement leads the tenor saxophonist into his most emotional solo on the album.

"Listen With Your Eyes" comes to a close with what starts a another slab of funk. Macbride's solid drums open the piece but the melody and chordal patterns do not the piece settle into a pattern.  Almazan, as usual, shines on his solo while Larson really digs into his spotlight.  The more you listen to this new album by the Adam Larson Band, the more the excellent musicianship and intelligent melodies win you over.  Open your mind and "Listen With Your Eyes."

For more information, go to http://adamlarsonjazz.com.

The album "drops" on September 5 – in the meantime, here's a tune:

Pianist, composer, and arranger Tadd Dameron (1917-1965) had a short but mostly productive life.  A native of Cleveland, Ohio, Dameron lived in a musical household and, in the early 1930s, came into contact with the music of Duke Ellington's Orchestra as well as the Orchestra of Fletcher Henderson.  By the age of 21, he was writing arrangements for several bands in his hometown. Soon, he was "on the road" with several different bands but did not create his own "style" until discovering "be-bop" as a member the Jimmie Lunceford Orchestra. By the end of the decade, Dameron was writing for the Dizzy Gillespie Big Band and touring with his own group
(one that included the trumpeter Fats Navarro). In the 1950s, he wrote and arranged for Clifford Brown and Sarah Vaughan plus made a number of albums including two with saxophonist John Coltrane. Narcotics addiction landed him in prison. After he served his time, Dameron wrote for numerous (including Benny Goodman) and recorded several more albums. A series of heart attacks slowed him down and cancer took him at the age of 48. 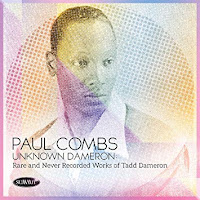 While doing research for his book "Dameronia: The Life and Music of Tadd Dameron" (2012, University of Michigan Press), saxophonist and educator Paul Combs (born 1946) discovered unrecorded and unpublished compositions by Dameron.  He created a program for quintet around a number of the pieces.  With the help of researcher and general manager Ken Poston of KSDS-FM in San Diego, CA, Combs first performed this program on the 100th anniversary of Dameron's birth. Summit Records got involved and helped underwrite the production of "Unknown Dameron: Rare and Never Recorded Works of Tadd Dameron" – the 12 tracks on the album include three from the live concert and three more each from three subsequent studio dates over 15 months. 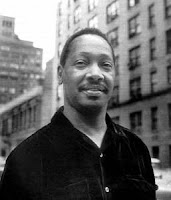 The  musicians on the recording include pianists Bill Cunliffe (on the concert tracks), Ken Cook, Melanie Grinnell, and Kamau Kenyatta.  Trumpeter Derek Cameron appears on nine tracks while bassist Rob Thorsen and percussionist/sound engineer Richard Sellers are on half the album.  Other musicians involved are bassists Jeff Denson and Alex Frank, percussionist Alex Aspinall, and vocalist Danielle Wertz.  What stands out for this listener (one who is not well-acquainted with Todd Dameron's music) is just how melodic the majority of these compositions. The spirited nature of the up-tempo tracks ("The Search", from the Gillespie repertoire, 1962's "Moon From The East", written for Benny Goodman, and "The Rampage", composed for Woody Herman in 1956, stand out) while "Never Been In Love" (recorded by bassist Bill Lee and vocalist Muriel Winston) is a fine ballad that should be recorded by modern vocalists.  The rest of the piece have a delightful swing (1940's "A la Bridges" dances right along) while the 1945 composition "Zakat" shows that Bop influence that would inform Dameron's music into the 1950s.

You can't call "Unknown Dameron" "easy listening music" but this music is definitely easy on the ears.  These spirited performances make one realize just how joyous and melodic the music of Todd Dameron is.  Paul Combs not only plays and writes well but also brings the best out of his music. What a delight!

For more information, go to www.paulcombs.com.