Jazz UpClose: A man, His Music, and His Community

We are lucky people living in Middletown Connecticut in that we have a vibrant arts scene, we have Wesleyan University and its concerts spaces, galleries, and theaters, we have the Russell Library, and we have Noah Baerman (pictured left).  Mr. Baerman is a composer, educator, pianist, author, and the creator of Resonant Motion.  Resonant Motion is a record label, a place for visual artists, for writers, for performance artists, and for collaborations.  Noah is artistic director and the producer of Jazz Up Close, a series of concerts presented in the Hubbard Room of the Russell Library, 123 Broad Street in Middletown.  Now in its fifth season, the series has brought world-renowned artists to perform, talk about their work, and to answer questions from the audience.  It's a win-win situation in that the musicians and composers can explain the impetus to create their works and the audience members get to understand what goes into the creative process.  The artists usually are joined by the pianist/curator along with his longtime collaborator, bassist Henry Lugo.

This coming Thursday August 22, Jazz Up Close welcomes bass clarinetist, composer, and social activist Todd Marcus.  Mr. Marcus, a native of New Jersey, has lived in Baltimore, MD, for over two decades and works tirelessly in the Sandtown-Winchester/Upton section of the city to bring about positive change.  You may recognize that area because it's where Freddie Gray died in police custody in 2015 and where massive riots followed in the wake of the event.  Mr. Marcus, who is half-Egyptian, had moved to Baltimore to go to college but left after two years, settled down in the community and went to work with the non-profit organization Intersection of Change – click on the name to see all that the organization does to help its community. 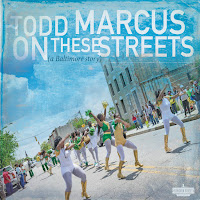 In early 2018, Todd Marcus released "On These Streets (a Baltimore Story)", an instrumental recording interspersed with audio clips from those very streets.  While the clips present a neighborhood in the midst of exploding and trying to deal with the eruptions of emotions, you also hear how community members turn to prayer and also remember what the area was like in its heyday.   At one time, the community's main thoroughfare, Pennsylvania Avenue, was alive with nightclubs, concert halls, theaters, and businesses, a hub of and for the African American families and working people.  Many Black artists played there, influencing generations of musicians and artists.  Mr. Marcus takes his compositional cues from the socially conscious music of Max Roach, Charles Mingus, Sonny Rollins, and Duke Ellington.  On previous recordings, he has explored Middle Eastern music , especially on his 2014 Jazz Orchestra recording "Blues For Tahrir", and he will several of those compositions to the Hubbard Room.

The program starts at 7 p.m. and is free and open to the public. Bring open ears and a curious mind; Jazz Up Close will do the rest.

Here's one of the audio clips and the musical story that follows:


While you're at it, check out the bass clarinetist's website @ toddmarcusjazz.com.

Check out his nine-piece Jazz Orchestra (this video is from 2013):