If you enjoy vocalists, it's easy to enjoy the work Sara Gazarek. The Seattle, WA, native has been "on the scene" since the early 2000s releasing is albums as a leader or co-leader since 2005.  She really inhabits songs, articulates the lyrics, the emotions are real (and never forced), and records songs from across a wide spectrum from "pop", folk, rock, blues, Broadway, and jazz.  Ms. Gazarek possesses a seemingly effortless voice with a wide range – she can sing really high up in that range and always make it sound good. 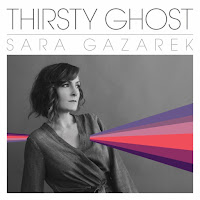 Album #7 is "Thirsty Ghost." The singer produced the album and it's her first to be self-released. Working with a crackerjack trio – Stu Mindeman (piano, Rhodes), Alex Boneham (bass), and Christian Euman (drums) – the 12-song program is her most emotionally varied.  Take "Never Will I Marry", the Frank Loesser song the 1960 musical "Greenwillow"; the Caribbean rhythms, the responsive reeds and brass, her joyous scat singing, and Mindeman's bubbling electric piano make the piece a declaration of independence.  And, as break-up songs go, Hoagy Carmichael's "I Get Along Without You Very Well" is one of the sadder ones.  Missing the rarely used subtitle, "Except Sometimes", Ms. Gazarek makes us believe those two words without every uttering them.  The sympathetic bass and drums (subtle brush work) and Mindeman's soul-tinged piano is excellent, a smart arrangement by the vocalist and pianist.

Then, there's Stevie Wonder's "I Believe When I Fall In Love", arguably one of the songwriter-performer's better tunes.  Ms. Gazarek's reading, replete with a horn section and backing vocals, takes its time to get to the chorus – when she does, it's such a quiet yet intense emotional release. Plus, that leads directly into an equally emotional alto sax solo from Josh Johnson.  Ms. Gazarek's wordless vocal in the final 30 seconds is breathtaking.  She follows with a smashing Geoff Keezer arrangement of Dolly Parton's "Jolene".  The rhythm section hits hard and really creates a whirlwind of tension-and-release while the vocalist pleads her hopeless case.  One has to be impressed how big the sound of the trio and voice are here without being shrill or over-blown.  Note the delightful drumming by Euman (you'll see him at play in the video below).

Three of the twelve piece are original lyrics by Ms. Gazarek  including two with melodies by Larry Goldings (who contributes organ on the tracks) and the other by Brad Mehldau.  "Easy Love" is a soft, swinging, tune with excellent piano by Mindeman with Goldings' organ coloring. The organ has a more atmospheric role on "Gaslight District", a tune that has the feel of Steely Dan's "Aja" with an excellent horn arrangement by trombonist Alan Ferber.  There's tenderness and vulnerability in the vocal plus a wistful hope for a better day. The album closes with "Distant Storm", the Mehldau melody. Opening with Ms. Gazarek's voice supported by Ferber's horn arrangement. Listen closely for the background voices of Erin Bentage and Kurt Elling – their subtle contributions help lead us to the verse and chorus.  Elling takes a verse after a fine Johnson solo, the poetry of the alto lines nicely expanded upon by the vocalist.  Ms. Gazarek returns, reminding the listener that although the "storms" that often make our lives so scary, there is hope with each new dawn.  She takes out the song with just Mindeman's piano and the reminder to "move on".

"Thirsty Ghost" is a triumph for Sara Gazarek.  Her song selection is spot-on, her voice sounds more assured than ever before, and the musicians she partners with play with such commitment and soul.  And, it sounds so good!  You'll feel better listening after listening to this music, so much so there should be no guilt playing it over and over.

For more information, go to saragazarek.com. 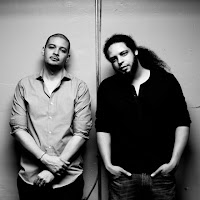 The Curtis Brothers, pianist Zaccai and bassist Luques, grew up in Hartford, CT, and were the beneficiaries of the school that Jackie and Dollie McLean created, The Artists Collective.  They both studied in Boston, MA, Zaccai at the New England Conservatory of Music and Luques at The Berklee College; after graduation, they formed their own band while maintaining an impressive number of sideman gigs.  Zaccai has worked with Ralph Peterson, Wallace Roney, and Donald Harrison while Luques has been in-demand since moving to New York City, working with Eddie Palmieri, Etienne Charles, Albert Rivera, and many more. They started their Truth Revolution label in 2009 and now, with the arrival of "Algorithm", have released five albums (including one recorded nine years before they had their own label). 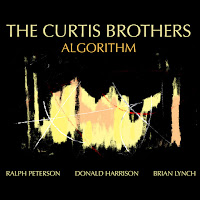 The new label is a live date recorded in February of 2018 at The Side Door Jazz Club in Old Lyme CT.  The nine-song program is the result of a Chamber Music America grant that Zacccai won; originally composed for their own band, this recording three of their mentors, drummer Ralph Peterson, trumpeter Brian Lynch, and alto saxophonist Donald Harrison.  Thanks to the presence of Mr. Peterson, much of this music is volcanic in nature (having seen the drummer perform in the space, he is surrounded by plastic for the recording; otherwise, his sound would swamp the band).  But the drums are not the only focal point. Zaccai is an excellent composer with an ear for intelligent melodies and fine harmonies.  He fashioned these songs to tell a story about the Brothers upbringing and the various mentors they encountered.  "Chief" is Donald Harrison's vehicle and he owns the space, his rippling phrases and powerful solo over the rollicking rhythm section is a joy to hear.  Touring with the "Big Chief's" band was the Brothers first professional gig.

The spotlight turns on Brian Lynch for "The Professor", a finely-etched tune, well-constructed, a blues-soaked ballad that he makes his own with long phrases, breathless runs, snappy notes, at times in dialogue with Peterson while the Brothers hold the piece together.  Luques takes a short but fine solo as the music fades to a close.  Several tunes pay tribute to the sound and feel of Art Blakey's Jazz Messenger, none moreso than "Undefined." The front line blares out while Zaccai's piano sets the stage. Soon, Lynch takes over, his muscular solo riding the waves of sound from the drums. Harrison roars into his solo and throughout, he too in dialogue with the drums. The thunder recedes for the beginning of the piano solo – the piano and drums engage in cat-and-mouse game before Zaccai dances forward, his brother's bass lines dancing beneath him.  You will scream alongside Side Door owner Ken Kitchings during the drum solo.

The album closes with "Sensei" and one its to hear Ralph Peterson in the lead. Zaccai and Luques supply the rhythmical melody line and the drummer tell the story.  The shortest track on the disk (4:01), one still is impressed by the power and the determination that Peterson brings to the song (as well as the entire program).

"Algorithm", with its Latin sensibilities and its impressive execution, is worth hearing for so many different reasons including the story lines, the wonderful musicianship, and to hear how the roles of the rhythm section and the front line can be blurred to great effect. Yes, the themes are well-drawn, the solos fiery yet often melodic, and the rhythms seductive and thunderous – for those of us in central Connecticut, The Curtis Brothers have grown up before our very ears, matured into excellent  and thoughtful musicians.  This album will rock your speakers (and your world) the way the performances rocked the audience at The Side Door.

For more information, go to truthrevolutionrecords.com/artists/curtisbrothers.

Jacques Kuba Séguin is a trumpeter and composer based in Montreal, Quebec, Canada.  He is one of the more celebrated trumpeters in Canada, winning several awards for the work he has done with two of his groups, including his Litania Projekt quartet collaboration with the Quatuor Bozzini, the Montreal-based string quartet. Besides creating his own label, Odd Sound, for his various ensembles, he's traveled to Germany, Poland, and China.  One of his bands, Odd Lot, has more of an electric edge with keyboards, synths, and pedals. 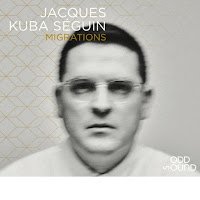 His latest album, "Migrations", has its roots in the composer's interviews with various cultural groups in Quebec Province.  Séguin, who is of Polish origins, created a musical program that addresses the hopes, dreams, fears, and joys of the people he talked with.  Playing the seven-song program is an ensemble that features highly acclaimed saxophonist Yannick Rieu, equally as acclaimed pianist Jean-Michel Pilc, vibraphonist Oliver Salazar, bassist Adrian Vedady, and drummer Kevin Warren.  One may be surprised on much this music swings. For example. "L'érivain" would not sound out of place on a mid-1960's Miles Davis album or coming from Dave Douglas.

The album opens with "Hymn" which opens with a solemn melody played by the trumpet with the tenor sax in counterpoint.  The band enters with a gospel lilt before the bass and drums drop into a loping rhythm underneath the lilting yet bluesy trumpet.  Check out the delightful piano solo followed by a fine tenor turn.  "I Remember Marie in April", a title which sounds as if should be for a lovely ballad, is quite a active post-bop tune that would not sound out of place on Wynton Marsalis's "Black Codes From The Underground."  The piece has a contagious rhythm and features exciting solos from Séguin and Pilc (dig his "Giant Steps" quote), a hopping vibes solo, and excellent counterpoint from bassist Vedady.

The powerful ballad, "Preimiére Neige (You're Not Alone)", features the leader's lyrical trumpet playing, filled with emotion, long notes, and, at times, sadness.  The album closer, "Mosaïques", has a Middle-Eastern feel in its rhythm and sinewy melody line.  The bassist has a long solo, then a short call-and-response with the entire group before stepping out once more.  The group takes the song out with the melody.  What makes this program so good is how the blend of solos and group playing are on an equal level, one not more important than the other.

"Migrations" is my introduction to the music and musicianship of Jacques Kuba Séguin.  He's organized an excellent band, Jean-Michel Pilc has rarely sounded so joyous, and the rhythm section truly supports and pushes the rest of the band.  Check it out.