Contemporary jazz played by a quartet that's been together for two decades with one only change in personnel is a rarity these days.  Alto saxophonist and composer Miguel Zenón began organizing his Quartet in 1999 with pianist Luis Perdomo, bassist Hans Glawischnig, and drummer Antonio Sánchez – Henry Cole replaced Sánchez in 2005 and that's been the lineup ever since.  Of the 12 albums that Zenón has released as a leader or co-leader, nine have featured the Quartet by itself or with guests. 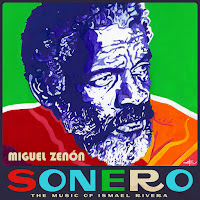 Album #12 (the ninth for the Quartet) is "Sonero: The Music of Ismael Rivera" and is released on Zenón's Miel Music label. Rivera (1931-87) had a career that lasted from the mid-1950s right up to the time of his passing.  His most "influential" years were the 1970s when his "stories" about life in Puerto Rico and throughout the Caribbean and parts of Latin America.  His vocal and rhythmical advancements and experiments made him extremely popular.  Even now, his recordings sell well and his influence is widespread.  This album opens with Rivera's voice from a 1966 a cappella recording with music arranged by Zenón for bass, piano, handclaps, and percussion beneath.  It gives the new listener a blueprint of what's to come. 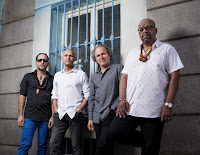 Zenón and his cohorts have great fun with this music, rearranging many of the pieces with the alto saxophone as the lead "singer."  The rhythm section leads the dancers onto the floor while Perdomo not only supports the leader but plays with great abandon. Pieces such as "El Negro Bembón" and "Colobó" are infectious, both sprinting off at the beginning.  The latter tune is played at breakneck speed et manages to still be quite melodic.  Zenón, who has always been a splendid soloist, has rarely sounded this joyful. The arrangements, all by the leader, pay homage to the originals yet often take fascinating turns. 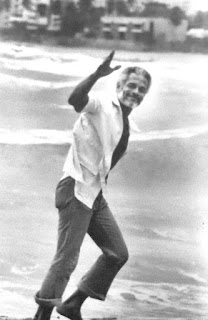 Don't miss the ballad "Si Te Contara" with its bolero rhythm, lovely alto tone and solo plus Glawischnig's splendid, rhythmical, bass spotlight.  The powerful piano backing and Cole's sympathetic, intelligent, drumming makes the song a highlight. The sweet call-and-response of the alto sax with the bowed bass leads the listener into "Hola" – the song is built up from Perdomo's block chords with Zenón's powerful solo standing out.

"Sonero" closes with "El Nazareno", a song written by Henry D. Williams that tells of a spirit watching over the singer's family in his time of serious addiction.    The alto sounds heavier in the beginning of the song while reading the theme yet the pall rises during the solo.  Perdomo's piano spot picks up on the positive energy, pushed forward by Cole's powerful drums.  After a sparkling unaccompanied alto solo, the band returns and Cole gets the spotlight.  His impressive statement is often breath-taking yet he never loses his way or plays outside the theme of the song.

Miguel Zenón continues to mine the rich veins of the music from his native Puerto Rico.  He's never been wary of exploring the "popular" and folk musics of the island. "Sonero" is a celebration of Ismael Rivera, illuminating how lively, timely, and timeless his music is.   Zenón's is a Quartet you will want to see in person and, depending where you live in the United States or Europe, they'll be on tour with this music for much of the rest of 2019.  In the meantime, this album shines brightly in a discography filled with blazing stars!

For more information, go to miguelzenon.com.

Here's a video with Miguel Zenón talking about Ismael Rivera and the singer/songwriter's influences on his life and music: 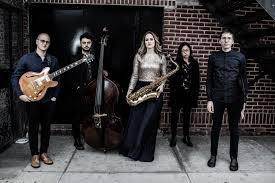 For her fifth album as a leader, tenor and soprano saxophonist Roxy Coss made the decision to select material from her first four albums (her self-released debut, the second on Origin Records, and two recent excellent releases on Posi-Tone Records) plus a new arrangement of the standard "All or Nothing at All."   The new album, titled "Quintet", is her first for Outside In Music – the program posits her in the midst of her touring group composed of Alex Wintz (guitar), Rick Rosato (bass), Jimmy Macbride (drums) and newest member Miki Yamanaka (piano, electric piano). 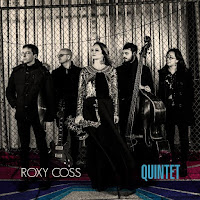 While this is a studio date, the results have the feel of a live gig. Ms. Coss is quite proud of the band and its enthusiasm for her material, how each musician makes it better with their desire to get the song's message across loud and clear.  Take "Mr. President" for example – composed in response to the election of the current United States leader (?), the piece begins and ends as a Russian funeral march.  The band uses the march as a jumping off point to hit a hard groove with fine solos from the leader and Ms. Yamanaka.  "Enlightenment" is a sweet, blues-drenched ballad with a long, luxurious, tenor solo plus a handsome piano spot. "The spotlight falls on bassist Rosato and guitarist Wintz on "You're There" – Macbride, the CT native who is quickly becoming a first-call drummer in New York City, really pushes the soloists on the track with his explosive fills and driving beat.

The one non-original, "All or Nothing at All", finds Ms. Coss taking the lead on soprano sax.  The piece has a delightful Latin feel with a hard-bop release. After the flowing soprano solo, Wintz strums his way into a sweet solo prodded forward by the powerful bass and drums combination. Ms. Yamanaka keeps the chords coming on electric piano as the guitarist hits his stride.

It's Ms. Coss's tenor sax pushing the proceedings on the final track "Females Are As Strong As Hell" – not only does she take a fiery solo but the rest of the Quintet, save for Rosato, get to speak their piece.  It's the shortest track on the program (4:43) but it's packed with power from the opening second to the final fade.

"Quintet" sounds great – Roxy Coss uses this release to look back over her career and previous recordings while the use of her "regular" band shows she's ready to move forward with these musicians, create new music with and for them. Play it loud and let the sounds and the incredible spirit wash over and throughout you!

Here's the Quintet in action:

For his eighth album as a leader for Pi Recordings (and 10th over all as a leader), alto saxophonist and composer Steve Lehman pairs his long-standing trio mates, bassist Matt Brewer and drummer Damion Reid, with pianist Craig Taborn. The album title, "The People I Love", comes from a quote from vibraphonist Bobby Hutcherson and is particularly relevant in his case and in Lehman's as well.  His original material has always been quite challenging but his long relationship with these musicians gives this 10-song program a warmth as well as an adventurousness that sounds exhilarating and emotionally strong. 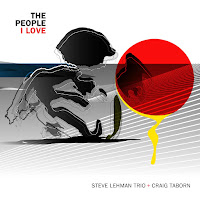 Three of the pieces are Lehman originals, three are duets with pianist Taborn, one medley that pairs a Lehman composition with one by Jeff "Tain" Watts, plus  one each by the electronica duo Auterche, Kurt Rosenwinkel, and the late Kenny Kirkland.  The strength of these performances is that no piece sounds out-of-place. The Rosenwinkel piece, "A Shifting Design", was recorded eight months before the rest of the album (September 2018 as opposed to May 2019) – it's a trio blowout of the tune that the composer released in 2001. It skitters along atop the splendid drumming and rapid-fire bass work.  Lehman rarely pauses for a breath yet never overplays.

There are moments when Lehman's alto is bouncing around in a manic style – those are the times that the saxophonist's attack remind this listener of fellow alto saxophonist Steve Coleman.  Lehman also is an extremely rhythmical player.  Note what he does on the original "Ih Calam & Ynnus" and the medley "Echoes/The Impaler". His melody lines seem to explode in sheets of notes and his solo ups the ante. On the former tune, his energy enliven the solos by Taborn and Brewer plus the tension created by the piano's block chords and Reid's chattering drums is palpable. The latter track opens with Lehman, Taborn, and Reid seemingly carrying on different conversations with only Brewer carrying the beat and, even without the listener notice, the music begins to cohere (or, perhaps, we get to used t the jagged rhythms.

The first 1:45 of Lehman's "Beyond All Limits"is a spotlight for  Brewer's unaccompanied bass. He sets the pace for the band to follow and they jump on the rhythm he provides.  As he does throughout the program, Reid cedes the bottom to the bass until he drops into the rhythm underneath alto solo. The drummer gets friskier beneath Taborn on the pianist's wide-ranging solo.

Kirkland's medium-tempo ballad "Chance" (first recorded for drummer Billy Hart's 1984 "Oshumare" album and then again on the pianist's 1991 debut album as a leader) has quite a different feel. The tension that can be felt on most of the quartet pieces and the one trio piece has dissipated, replaced by emotionally rich solos from both the leader and the pianist with sympathetic brush working intelligent counterpoint from the bassist.

"The People I Love" closes with the third duo track from Steve Lehman and Craig Taborn. "Postlude", like the previous two duos, is short, like haikus in the midst of longer stories. Just as powerful, these reflections stand out from the other tracks but do not interfere with the overall theme of the album, to make music with "the people I love."  Steve Lehman continues to mature as a composer and saxophonist, creating music that challenges, educates, and moves the listener.


Here's the full version of the track in the video: