The Bass In Many Places (Part 1)

Bassist, composer, and arranger Anne Mette Iversen now lives with her family in Berlin, Germany. She moved there in 2012 after 15 years in New York City where she studied at the New School, formed several groups, and helped to create the Brooklyn Jazz Underground collective and record label.  Ms. Iversen continues to lead her eponymous Quartet +1 plus the Berlin-based Ternion Quartet. She also still has connection to classical music as well as writing soundtracks. 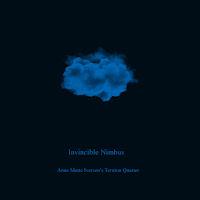 "Invisible Nimbus" (BJU Records) is the second album from the Ternion Quartet.  Featuring the nimble alto saxophone of Silke Eberhard and buoyant trombone of Geoffroy De Masure as well as the rhythm section of drummer Roland Schneider and Ms. Iversen, the album was recorded in Lubrza, Poland, a small village two hours to the east of Berlin.  The music covers a lot of territory, from the joyous bounce of "Within a Diapason" (French for "bursts of sounds" or "tuning fork") to the insistent drive of "Dig Your Heels In" to the intense ballad "The Rose Window".  In her brief but cogent liner notes, Ms. Iversen writes "Music only lives when a dialog is present" - every song on the album is a conversation between the band members. Yes, there are solos throughout but, initially, the listener can't help but hear these four musicians really listen to each other plus the material the bassist provides for them plays to their strengths.

There are moments when the music takes delightful detours.  "Ionian Steps" ride out on a brisk bass line and Schneider's conversational drums. Ms. Eberhard's alto lines flutter and dart around, leading the rhythms section into a "free" section then into a slow blues chorus. De Masure picks up the slow vibe moving into a rubato before the band reenters to take the song out on its opening theme.  The title track, expanded to"The Invincible Nimbus of Mystery", opens as a ballad with the bowed bass, alto sax, and trombone playing a classically-inspired melody before subtly slipping into a blues. One can hear traces of Charles Mingus on this track. The solos are quite exploratory yet the piece is most appealing when Ms. Eberhard and De Masure spar and parry.

There are so many albums released every month in all genres. Every serious listener has his or her favorites. The critic/writer Whitney Balliett write that jazz is "the sound of surprise."  Over a century after the music rose out of the bars and brothels of New Orleans, for those of us who are avid listeners, jazz is often "the sound of delight."  You can hear delight throughout "Invincible Nimbus", from the intelligently-formed compositions to the often-witty interplay, in the cleanly-recorded sounds of the Ternion Quartet and the adventurous manner in which each musician adds her or his voice to the ensemble.

For more information, go to www.annemetteiverson.com. (The album will be released on May 10, 2019). 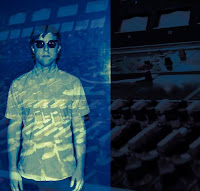 Producer, bassist, and composer Billy Mohler is best known for his collaborations with drummer Jimmy Chamberlain (from Smashing Pumpkins) and Macy Gray plus studio work with Kelly Clarkson, Pom Poms, and the music he created with and for skateboarding legend Tony Hawk.  Mohler studied at the Berklee College of Music in Boston, MA, and was accepted into the Thelonious Monk Institute of Jazz. There, he studied and performed alongside Wayne Shorter, Herbie Hancock, Terri Lynn Carrington, Brian Blade, Joshua Redman, and Barry Harris (and a slew of other great musicians. 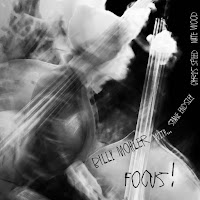 "Focus!" (MAKE Records) is Mohler's debut as a leader and features an excellent lineup; Shane Endlsley (trumpet), Chris Speed (tenor sax, clarinet), and Nate Woods (drums) keep their focus on creating lively, interactive, music that jumps out of the speakers. Mohler and Woods are combustible on first two tracks,  "Deconstruction" and "Distant Star".  They both play the rhythms hard and fast, creating a foundation that both Endsley and Speed dance over.  The trumpeter's crisp tone (with echo and delay) and attack blends smartly with the warmer yet no less exciting playing of Speed.  Listen to how the bass and drums introduce "Prairie Flower", setting up the melody with explosive drums and an entrancing bass line. Speed, on clarinet here, plays bird-like riffs while Endsley weaves in his own powerful lines.  In the meantime, Woods powerful drumming really moves the music forward. 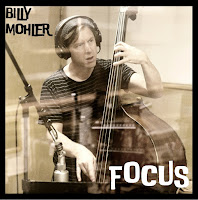 Mohler also wrote several handsome ballads for the album.  "Wolf Moon" has such a handsome melody with hints of The Band's Robbie Robertson's style in the harmonies and chords.  "Even Tide" opens with a fine bass solo that leads the listener into a melody line that moves up and cascades down, not unlike a ballad Ornette Coleman might write. The piece built slowly yet never boils over, the plaintive melodies creating a calm.  The album comes to a close with one more ballad. Titled "Coin", the melody line hearkens back to "The Snake Charmer's Song" but resolves like a traditional Klezmer tune.  Moving slowly over a droning bowed bass and quiet yet active drumming, neither Speed's breathy tenor sax nor Endsley's muted trumpet pushes the pace. Both "lead" voices play soulful phrases on to the end of this meditative piece (note the whirling dervish loop that comes as the final notes fade).

"Focus" is powerful, interactive, intelligent, and disruptive.  Some of the music seems on the brink of going over the edge (thanks to Nate Woods incredible drumming) but the bass work of leader Billy Mohler keeps the focus of the music on the melodies and the rhythms.  Find the album, play it loud - very loud - and enjoy the joy of creative music!

For more information, go to www.billymohler.com.

Even if you do not recognize the name Jay Anderson, chances are good you've heard his melodious playing. The bassist has appeared on a slew of albums, working and recording with the Maria Schneider Orchestra, pianists Frank Kimbrough, the late Paul Bley, and George Cables as well as a host of artists through his long association with SteepleChase Records: one can hear him on disks by pianist Stanley Cowell, Peter Zak, Freddie Redd, and Burak Bedyikan as well as saxophonists Rich Perry (his friend from the MSO), Andrew Rathbun, and Ronnie Cuber (over 100 sessions in 20 years!).  I saw him in concert a dozen years ago with pianist Lynn Arriale and his smooth style, full tone, and counterpoint was quite arresting and a perfect for the leader. 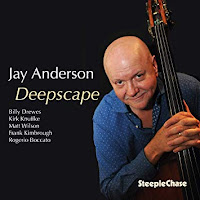 "Deepscape" (SteepleChase) is his third album as a leader but the first since 1994's "Local Color" (DMP).  The 11-song program is a blend of solo and ensemble tracks, standards, pieces by jazz artists such as Keith Jarrett, Branford Marsalis, and Jim Pepper. There's a duo with Kimbrough (on harmonium) on "Tennessee Waltz" that is charming and beguiling.  The bassist also plays several solo pieces including a lovely reading of Billy Joel's "And So It Goes."  Anderson caresses the melody and then creates a solo plays off various lines of the song without losing sight of the heart in the song.  The title track, which opens the album, is a short yet lovely solo piece.  Listen closely as you will hear the layers of sounds all created in overdubs by Anderson - it's as effective as it is beautiful 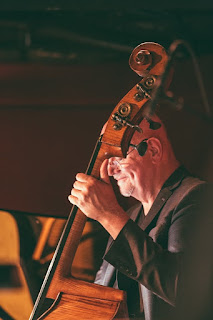 Anderson teams up with Matt Wilson (drums on eight cuts), Kirk Knuffke (cornet on six tunes), and Billy Drewes (alto and soprano saxes, bass clarinet, on seven tracks) for a series of pieces that alternately shake the house or take on a meditative tone.  Jim Pepper's "Witchi-Tai-To" is a spotlight for Drewes' delightful soprano sax - the tracks also features Kimbrough's harmonium and percussion from Wilson and Rogerio Boccato. That same quintet of musicians create an audio painting of Morton Feldman's "Rothko Chapel (5th Movement)" with a delightful blend of soprano sax and harmonium move the meditative melody along. Pay attention to the playing of both Wilson and Boccato. Wilson creates a delight dance rhythm to lead in the classic "Sweet and Lovely" - there's a sweet touch of "second line" in both the rhythm and Anderson's sweet take on the melody.  Knuffke's cornet takes over the melody and the band drops into a blend of swing and funk.  The quartet of Wilson, Anderson, Knuffke, and Drewes (alto sax) take a joyful romp through Branford Marsalis's "The Mighty Sword" (from his 2012 "4 MFs Playin' Tunes" album).  This is music that brings a smile as the ground navigates the tricky rhythms and tempos the bring to mind both Ornette Coleman and Keith Jarrett.  Note how Anderson and Wilson lock in to the "groove" yet sound so free and swinging throughout the piece.  The same configuration digs into Anderson's "Momentum", a fascinating ballad. The handsome, emotionally rich, melody is supported by harmonies from the bass and Wilson's melodic drumming and strong cymbal work.  Both Drewes soprano solo and Knuffke's cornet are rich with ideas and finely-sketched lines.

"Deepscape" is a treat from start-to-finish.  Jay Anderson shines as a leader, arranger, soloist, and member of the rhythm section. All the musicians on the album are long-time friends and collaborators, the album was recorded in the bassist's home studio, and the results are exciting, musical, and comforting.

For more information, go to www.jayandersonbass.com.