Most music aficionados are aware of multi-instrumentalist Scott Robinson from his long tenure with the Maria Schneider Orchestra. He's a whiz on just about every saxophone that exists including baritone, C-Melody, contrabass sax, and tenor.  He also plays clarinet, trumpet, bass marimba, and is a master of the theremin and other electronic devices.  His label, ScienSonic Recordings, features a number of albums including a tribute to Sun Ra (with Marshall Allen), duos with Roscoe Mitchell and Frank Kimbrough, and a trio date with reed masters J.D. Parran and Vinny Golia.  Robinson has recorded with numerous artists and ensembles ranging from John Pizzarelli to the Bob Mintzer Big Band to Paquito D'Rivera to Bob Brookmeyer to Joe Lovano and David Bowie (plus many, many more). 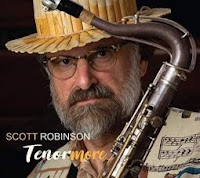 His latest project for Arbors Jazz, "Tenormore", announces its theme in the album title. Robinson plays tenor saxophone and only tenor saxophone on all 10 tracks. Joining him is Helen Sung (piano, Hammond B-3 on two tracks), Dennis Mackrel (drums), and Martin Wind (string bass, acoustic bass guitar) plus the leader's wife Sharon plays flute on one song. The program, a mix of standards and originals, opens with an unaccompanied reading of The Beatles' "And I Love Her" - the saxophonist plays the four-note introduction way up in the tenor's higher range, sounding very music like a clarion call or even a wake-up call.  He caresses the melody save for one dizzying run that goes "out."

That tunes leads into "Tenor Eleven" which is, no surprise, an 11-bar blues.  It's a "blowing" piece with Mackrel and Wind strutting right along and Ms. Sung providing a cushion for the tenor solo.  Later in the program, the quartet dances its way through "Tenor Twelve", a piece that the leader first recorded in 1988.  Also an uptempo blues, Ms. Sung plays a standout solo as does Robinson and Wind. Mackrel keeps the music percolating plus engages in a delightful give-and-take with the saxophonist near the close of the song. There's a lot of energy in the studio and it's a pleasure to eavesdrop on the proceedings. 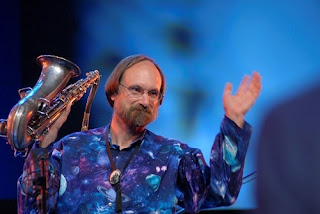 There's a hint of the breathiness of Ben Webster and Coleman Hawkins on several of the ballads. "Put on a Happy Face", usually a sprightly tune, is slowed way down. That's just fine as both Robinson and Ms. Sung explore various emotions in their respective solos, the former sounding a more introspective while the latter seems to dance over the soft but steady rhythm section.  While "The Good Life" opens with several minutes of "free" improvisation, Robinson draws the band into the melody with a long note.  Note how Wind's sweet tone and Mackrel's fine brush work really create a lighter feel.  Ms. Sung's gospel Hammond B-3 sound is the perfect opening for the bassist's piece "Rainy River."  Based on a chapter from author Tim O'Brien's short collection "The Things They Carried" (stories from the Vietnam War), Robinson plays the melody then turns the piece over to the composer and the organist.  Even if you don't know the stories, this is a powerful performance that speaks to what matters in our lives. 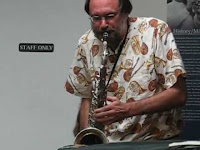 The leader's wife Sharon appears on "The Weaver", an original based a haiku composed by Robinson's father for his son's wedding. One hears Ms. Robinson's flute in the theme section and again at the close. In between, the piece has the feel of mid-70s McCoy Tyner composition only not as insistent.  The blend of tenor and flute is quite lovely.

The program closes with a funky reading of Hoagy Carmichael's "The Nearness of You" and the title track.  "Nearness" is propelled by Mackrel's "Pretty" Purdie drumming, Wind's dancing lines, and Ms. Sung's sweet Hammond organ playing.  "Tenormore" is a fascinating puzzle, with its stop-and-start opening - here again Mackrel is the linchpin. He pushes the piece forward, plays several short interludes, engages in a rousing dialogue with Robinson, dances around his cymbals as Ms. Sung explores the many possibilities that the piece provides. Her solo is quite expansive as well as impressive.  The angular closing section, with Robinson's eerie tenor sounds, is serious fun.

This is fun and serious and quite musical.  Listen to this music with an open mind as the program is challenging, sweet, exciting, introspective, witty, and filled with great musicianship.  Scott Robinson is a treasure! 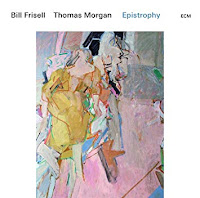 Guitarist Bill Frisell and bassist Thomas Morgan played a series of shows at New York City's Village Vanguard in March of 2016.  From those dates, ECM Records released "Small Town" in the Spring of 2017.  It's Spring once more and now the label presents more music from that date. "Epistrophy" is a delight-filled collection of songs, a program of standards, pop tunes, folk songs, two Thelonious Monk pieces (the title tracks and "Pannonica"), and a James Bond movie theme (John Barry's "You Only Live Twice"). And, because both musicians love melody and love to improvise, the performances are never lackluster but enjoyable from beginning to end.

The two Monk tunes come back-to-back right after a lovely reading of Billy Strayhorn's "Lush Life."  That tune features splendid counterpoint from Morgan, something he is quite adept at.  The bassist also knows how to "swing" a piece as he demonstrates during Frisell's solo on the title track. "Pannonica" is quite a jaunty piece - as one gets older, it's amazing how Monk had one foot in the blues (so apparent on the "sweet" melody) and the other in jazz.

Frisell, who has embraced "Americana" since the 1990s, has also reached back to his formative years over the past decade.  Here, he blends the country standard "Wildwood Flowers" (which also appeared on the earlier album) with "Save the Last Dance For Me" (composed by "Doc" Pomus and Mort Shuman for The Drifters). And, it works. The combination works because both songs have some memorable melodies.  Later in the program, the duo creates a slow meditation on "Red River Valley" that opens up into the melody and begins to swing.

The album closes with "In the Wee Small Hours of the Morning", a lovely ballad that is the perfect ending to an enjoyable musical experience. By this point in his career, one seems to know what to expect from Bill Frisell. Yet, this meeting with Thomas Morgan, who has worked with the guitarist on several recordings and tours, has so many emotional and musical highs, it's well worth taking the time to bathe in these sounds.