Charlie "Yardbird" Parker, Jazz & Poetry: Catching Up to The Future 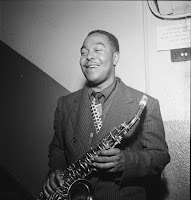 I would venture a guess that most people who read this blog know who Charlie Parker is and there is very little I can add to his legend.   Here's the short bio. The alto saxophonist, who was born in Kansas City, Kansas, in 1920, is universally recognized as one of the originators of be-bop (along with Dizzy Gillespie, Max Roach, Kenny Clarke, and Bud Powell). Right after World War II came to a close, Parker made a series of recordings that many believe are the Holy Grail of jazz. But he had albatross around his neck - his addiction to heroin not only ruined the lives of many of the musicians who idolized him but also Parker's ability to perform, record, and tour.  But his music lives on: nearly 65 years after his death at the age of 34, his endlessly inventive solos still inspire musicians around the world.

Yusuf Komunyakaa, born in Bogalusa, LA, in 1947, is one of the premier poets of the United States with a career that spans over 46 years.  He did not start writing and punishing poetry until the early 1970s. Many of his poems, especially the early ones, were influenced by his experiences in Vietnam where he worked as a correspondent and editor during the height of the conflict.  Among his collections, you will also find poems about jazz and blues. In addition, he co-edited (along with Sacha Feinstein) the two volumes of "The Jazz Poetry Anthology" published in the 1990s by Indiana University Press.

In 2013, Wesleyan University Press published Komunyakaa's "Testimony: A Tribute to Charlie Parker (with New and Selected Poems)", a book that also comes with an audio recording of a 2002 concert originally broadcast by the Australian Broadcasting Corporation (ABC). ABC had commissioned the work in the mid-1990s: the 14-part libretto first appeared in Komunyakaa's 1998 collection "Thieves of Paradise" (Wesleyan University Press). In September of 1997, the poet had recorded with saxophonist John Tchihai in a septet that also featured bassist Fred Hopkins (from trio Air) and guitarist Jeff Parker (his website is the only place to get the CD as there is no digital release) - a number of the poems Komunyakaa contributed to that project, titled "Love Notes From The Madhouse" (8th Harmonic Breakdown), appear in the book.

ABC also commissioned saxophonist, composer, and arranger Sandy Evans (pictured below) to create the music for the broadcast. Ms. Evans, who has worked with numerous Australian ensembles including being the co-leader of Clarion

Fracture Zone (see hear), the Australian Art Orchestra, and 10-Part Invention, assembled a program that not only included bebop but also blues, classical music, modern jazz, and much more.  The two-minute "Overture" includes snippets of "Moose The Mooche", "Relaxin' At Camarillo", "Dewey Square", and "52nd Street Theme" (all Charle Parker tunes save for the last one listed which is by Thelonious Monk).  The 96-minute concert also includes Parker's "Koko" and Irving Berlin's "If I Had You".  Among the musicians are pianist Alistair Spence, bassist Lloyd Swanton (The Necks), trumpeter Warwick Alder, trombonist James Greening, and the great alto saxophonist Bernie McGann (1937-2013) plus spoken word artist Michael Edward-Stevens (an actor from New York City who makes his home in Australia) and a slew of vocalists including, on one track, Kurt Elling.

The only way one gets to hear this fascinating project is to buy "Testimony" as the two-cd set was here released on its own.  It's truly worth the experience.  The poems stand on their own and "Testimony" (the poem) can certainly read without the music. But to hear how Ms. Evans integrates the poetry into the music is really a treat. The package is available from all booksellers, from online retailers, and from HFS Books - the link is below.

To find out more about Yusef Komunyakaa, go to www.poetryfoundation.org/poets/yusef-komunyakaa.

For more information about Sandy Evans and her latest projects, go to sandyevans.com.au.

For more information about the book, go to testimony.site.wesleyan.edu.

My thanks to Suzanna Tamminen, Director and Editor-in-Chief at Wesleyan University Press, for her kindness and generosity.
Posted by Richard B. Kamins at 6:01 PM