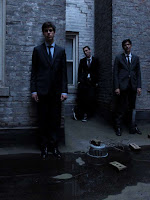 The Nick Sanders Trio - the leader on piano, bassist Henry Fraser, and drummer Connor Baker - has been a working and recording unit since they came together at the New England Conservatory of Music in 2011.  The trio's debut album on Sunnyside Records, "Nameless Neighbors", was issued in 2013. Produced by Fred Hersch (as was 2015's "You Are A Creature"), the first recording introduced the listener to a group that really listened to each other, with intelligent interactions, and material that challenged and emotionally moved its audience.  Sanders, a native of New Orleans, LA, has been playing piano since he was seven years old going on to study at the New Orleans Center for Creative Arts. While his music may not show any outward signs of his hometown, his use of various rhythms, blues riffs, and the fact that his songs "tell stories" links him to musicians such as Dr. John, James Booker, Randy Newman, and Allen Toussaint.

The Trio's third Sunnyside release, "Playtime 2050", continues in the tradition of its predecessors and not only because the program contains 13 songs (lucky number perhaps?  The pianist was born on December 13) but also in the way that Sanders continues to challenge his bandmates as well as the listener.   The title track, which has a jaunty feel, reminds this listener of the work of both Herbie Nichols and Andrew Hill. Both of those pianists/composers worked within the "tradition' often turning the rhythm inside out or creating unsuspected chordal shifts.  There's a touch of George Gershwin as well as a hint of the late Mr. Toussaint in "Prepared for the Blues" - notice the fine bass work of Fraser and the subtleties in Baker's fine cymbal and brush work.  The following track, "Still Considering", has the feel of Erik Satie filtered through a thoughtful Fats Waller.

Sanders composed "Interlude for S.B" for his mother (who passed in 2005) - the solo piece is a lovely elegy but not a lament. The "memory" is sweet and the music, with classical overtones, has a bittersweet feel.  Later in the program, "Prepared For the Accident" takes on the air of a John Cage piece with prepared piano, rapid-fire bass lines, and splashing cymbals.  The melody does not emerge until 2/3rds of the way into the song - everything feels backwards.  The album ends with the lovely "#2 Longfellow Park" bringing to mind the afore-mentioned Randy Newman, especially in the handsome melody line and the supporting chords.

Leah Saulnier's cover art for "Playtime 2050" acts as a not-so-subtle warning about the changing environmental conditions, an issue not only important to citizens of New Orleans but also many people around the world.  The music of Nick Sanders, the playing of the Trio (and, trust me, they are playing in several senses of the word), and the fine sound quality (the pianist produced this album) all add up to a delight aural experience.  Although a number of the tracks are short, every song feels complete.  Excellent!!

For more information, go to www.nicksandersmusic.com.

Here's the opening track (whose title is good advice for all):

Composer, keyboardist, and arranger Guillermo Klein has created an impressive body of work over the past two+ decades.  Much of his work with the Los Gauchos groups found the composer and his 11-piece ensemble exploring a wide range of music with influences from his native Argentina such as Alberto Ginastera and Astor Piazzolla) as well as his exposure to composer/arrangers such as Duke Ellington and Wayne Shorter plus his teacher at the Berklee School of Music, Herb Pomeroy.  the more you listen to the music Klein has created the less one thinks about his influences. Instead, notice his melodies, his delightful use of rhythms, how he writes for sections, and how play-full his music can be.  After a decade in the United States, Klein and his family first moved to Barcelona, Spain, and several years later, moved home to Buenos Aires when he teaches and performs. He still travels to the US to do workshops. 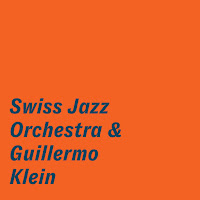 His latest project and album is simply titled "Swiss Jazz Orchestra & Guillermo Klein" (Sunnyside Records).  The 13-song program is filled with fine melodies, sweet harmonies, great interplay, fascinating rhythms, and excellent solos.  Like his contemporaries Maria Schneider, John Hollenbeck, and Darcy James Argue, Klein does not crowd his songs with plentiful solos. Instead, each track has one or two soloists (with the exception of "Patent Office (Ibernia)" which has three) and the solos rise smartly out of the pieces.  The SJO has been in existence since 2004 and have, over the years, worked with such fine musicians, composers, and arrangers as George Gruntz, Jim McNeely, Paquito D'Rivera, Phil Woods, and Bob Mintzer plus many others. 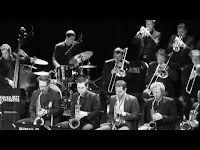 Listen to the playful strains of "Inside Zytglogge" named for the ancient clocktower in Bern, Switzerland. Zytglogge was built in the early 1200s and, 100 years later, served as women's prison. A fire ended the presence of a jail and the tower has served as a timekeeper and attraction since then.  Note how Klein suggests the mechanisms of a clock in the rhythms on the song and the next track, "Zytglogge II".  The "bottom"of the tune, represented by the tuba, trombones, and bass, gives the music great depth.  The final track, "Lepo", is a funky piece that has musical asides built into each line with the guitar suggesting a mandolin - it's a delightful puzzle yet the pieces fit perfectly.

Actually, a number of the songs suggest clocks in the rhythms or the circular melodies. "Machine & Emile" has that feel but also sounds like a mixture of the Glenn Miller Orchestra with the Carla Bley Big Band, especially in the lines the saxes play. The opening of "Es Infinita" not only could be clock sounds but also has a classical bent.

No matter how you approach the music on "Swiss Jazz Orchestra & Guillermo Klein", whether you are looking for influences or trying to compare it to earlier music of the composer, this is superb music. The more you listen, the more you hear just how the pieces fit together, how well the band plays, how the composer played to the strengths of the musicians, and created a work of often stunning creativity.

For the translated page from the Swiss Jazz Orchestra's website, go to translate.google.com/translate?hl=en&sl=de&u=https://swissjazzorchestra.com/&prev=search.