The current edition of the Branford Marsalis Quartet has been together for 20 years with the exception of the drummer Jason Faulkner who joined in 2009.  Marsalis (tenor saxophone, soprano saxophone), Joey Calderazzo (piano), and Eric Revis (bass) have built up quite a rapport and Faulkner (who is just 27 years old) stepped right into his predecessor's Jeff "Tain" Watts's role with nary a dropped beat. 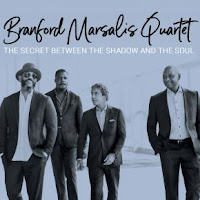 The BMQ's new album, "The Secret Between The Shadow and The Soul" (Okeh Records), is the first quartet disk in seven years.  Five of the seven tunes are originals (two each by Calderazzo and Revis, one by Marsalis) with inspired readings of Andrew Hill's "Snake Hip Waltz" and Keith Jarrett's "The Windup". "....Waltz" (a piece Hill recorded twice in 1975, one with a quartet, the other as a piano solo) is a jaunty piece with playful yet powerful solos from the leader and the pianist plus splendid support from the rhythm section. Faulkner, in particular, sounds as if he is having such a fun time.  Revis, who is such a melodic player, joins in on the fun especially on his solo.  The Jarrett piece closes the program - if you remember the original with the pianist's "European Quartet" of Jan Garbarek (alto and soprano saxes), Palle Danielsson (bass), and Jon Christensen (drums), this version, once the band moves out of the theme, swings like mad. Calderazzo's solo is inspired from the get-go.  Marsalis, on tenor, digs right into his solo, pushed hard by the rhythm section and he rides their powerful waves. 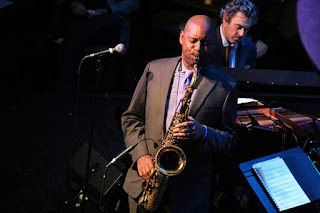 Of the original material, the program opens with Revis's "Dance of the Evil Toys" which scoots along on Faulkner's martial drumming and the composer's rapid-fire circular bass line.  The piece changes pace several times, even going "out" for a quick moment, and features strong solos from tenor sax and piano. Revis also contributed "Nilaste", an intimate ballad that pulses with intense work from soprano saxophone and the interactions of the rhythm section. Calderazzo's ballad, "Conversation Among The Ruins" has a lovely full melody for the soprano sax plus strong solos from the composer and excellent brushwork from Faulkner. The pianist's "Cianna" also is a ballad, more uptempo but never rushed.  "Life Filtering From the Water Flowers" has a mysterious opening for tenor saxophone before entering into the body of the song. One hears a classical influence in this piece, composed by the leader, especially in Calderazzo's lovely piano unaccompanied piano interlude.  When the rhythm section (listen closely how they advance the music) enters, the music takes flight. Marsalis, on tenor sax here, creates a solo with rolling phrases, flowing lines, and powerful emotion.

"The Secret Between The Shadow and The Soul" is a delightful album.  Lively, collaborative, at times powerful, other times sensual, the Branford Marsalis Quartet is at the top of its form. Recorded in Australia during a break of the group's 2018 world tour, the music shines and sings, dances and swings.

For more information, go to www.branfordmarsalis.com.

Pianists and composers Vijay Iyer and Craig Taborn, born a year apart (1971 and 1970 respectively), first recorded together in saxophonist - conceptualist Roscoe Mitchell's Note Factory in 2001. Later that decade, they started working as a duo. Both bring a wealth of experiences and musical knowledge as well as a sense of adventure.  They have worked in both acoustic and electric groups but stick to the acoustic piano for their concerts and now for their debut album. 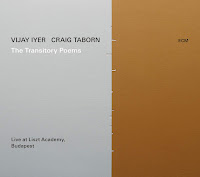 "The Transitory Poems" (ECM Records) was recorded in March of 2018 in the concert hall of the Franz Liszt Academy in Budapest, Hungary.  All eight of the pieces on the album are credited to the duo (except for a section of the final track) and four are dedicated to three pianists (Cecil Taylor, Muhal Richard Abrams, and Ms. Geri Allen) plus artist Jack Whitten.  All but Taylor had died before the recording was made (he passed in early April of 2018) but the tribute makes sense as he was an influence on both pianists.
Instead of trying to pull the album apart and guessing who played which solo, I would recommend digging in to each piece and listen for melody, harmony, the flow, the rhythms, how ideas are transmitted from one player to the other, and how you will hear more with each listen.

The program opens and closes with the two longest performances.   "Life Line (Seven Tensions)" (13:02), while not dedicated to Muhal Abrams, feels like one of his exploratory pieces.  Changing tempos, moving from quick, skittering, phrases to rich chords and impressionistic movements, the music holds your attention by moving in unexpected directions, almost at the whim of the performers.  The final track, "Meshwork/Libation/When Kabuya Dances" (12:49), is dedicated to Ms. Allen, with an exciting forward motion in the pianist's left hands as the phrases go from longer lines to pounding chords. There's no delineation between the three parts but one can hear subtle changes in the mood as the music shifts into a different modality.  If you listen to Ms. Allen's song (played solo), from her 1984 trio Lp "The Printmakers", you can hear how her music informs this medley from the very beginning.

"Clear Monolith" is dedicated to Mr. Abrams - it is fascinating to hear the duo build the piece from its quiet beginning to the blues-soaked middle to the quiet, trance-like, section that follows, ending with an intense dialogue.  Mr. Taylor is celebrated on "Luminous Brew."  Opening with an ominous rumbling, a quiet melody emerges. Slowly, the intensity begins to pick up while the melody opens wider.  A bass line emerges from one piano yet, before too long, both players are expanding the palette. The rolling piano lines come together before the pianists start to trade lines. Suddenly, the music explodes for a moment before coming down for a soft ending.

"The Transitory Poems" is a riveting program from start to finish. Vijay Iyer and Craig Taborn marry their individual styles and create music that is powerful, exploratory, challenging, and beyond category.  Find the album and enjoy the journey these two fine pianists create.

When ECM puts the album officially on its website, one should be ablate listen to sound clips.  In the meantime, there are a number of videos of the duo with fair-to-middling loud quality.