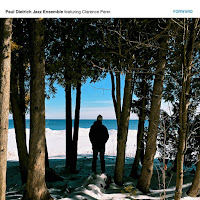 Trumpeter, composer, arranger, and educator Paul Dietrich splits his time between Chicago, IL, and Madison, Wisconsin, where he has been playing as well as directing the Madison East High School Jazz Orchestra.  As a leader, he has issued two Quintet disks: if you have access to that music, you can hear the roots of his third album "Forward" (self-released).  Credited to the 19-piece Paul Dietrich Jazz Orchestra featuring Clarence Penn, the music is a splendid band of strong melodies, lovely harmonies, excellent solos, and intelligent arrangements.  The Orchestra (see personnel below) is composed of musicians from both Chicago and Madison (the leader has groups in both cities), some of whom are among the most in-demand players in the Midwest. Dietrich reached out to New York City-based Clarence Penn to round out the rhythm section for several reasons, not the least of which is the drummer's work with the Maria Schneider Orchestra.

You can hear Ms. Schneider's influence on the compositions and in the way the arranger paints the arrangements around the solos.  Only three of the eight tunes have more than one soloist - each of those cuts has two.  And there are several stunning spotlights.  Trumpeter Russ Johnson is featured on the album opener "Rush" and on "Forward: I. Perennial" : it's such a treat to hear him rise above the sections and Megan Moran's wordless vocals.  Alto saxophonist Greg Ward, who seems to be on every album out of Chicago, is featured on two stunning ballads. He leads the orchestra in on "Settle" before stepping out for a beautiful and richly emotional solo.  Ward's other spot is on "Forward: II. Snow", a piece that is so evocative of standing at a window on a cold winter night watching the snow settle on the neighborhood. The alto saxophonist plays gently in the alto's higher ranges. Pay attention to the incredible percussion and Carl Kennedy's gentle piano backing.

Tenor saxophonist Dustin Laurenzi (Twin Talk) stands out on the lovely "Chorale" whose opening saxophone chorale is reminiscent of Ms. Schneider's "Sky Blue." Different voices within the ensemble play the song's main theme through the opening two and-a-half minutes. Laurenzi begins with just Penn, guitarist Matt Gold, Kennedy, and bassist John Christensen in support.  As he tells his "story", the brass and reeds begin to filter in the background playing long chords which leads back to the opening theme. The other feature for the tenor saxophonist is the up-tempo "Forward: III. Roads" - the piece opens on a Burt Bacharach-style rhythm and Laurenzi does not step out until halfway through the piece.  Again, it's a spare piano-guitar-bass-drums backing underneath Laurenzi's spiraling lines. It's just those five musicians for the first two minutes but soon the brass, reeds, and voice begin to make their presence felt.

If you are an aficionado of modern big band/large ensemble music, go find "Forward."  Chances are good that you do not know the name or the music of Paul Dietrich but this album will make you smile, perhaps remember days of walking through fields or through the wooded areas with the sun ship through colorful leaves.  The leader/composer plays on only one track - the beautiful "Forward: IV. Green Fields", playing a solo that is filled with heart and emotion.  His brilliant use of Megan Moran's voice as part of the ensemble adds an ethereal feel throughout the program (she appears on all but one song) is an inspired touch.  Find a comfortable chair put this music on your player, relax in the glorious sounds, and allow your emotions to range free.   This album has been become a constant in my large rotation of weekly CDs and I have no reason to replace it as I hear something different each time through.

For more information, go to www.pauldietrichjazz.com.

Here's a track from the four-part "Suite" that closes the album (soloist is tenor saxophonist Dustin Laurenzi): 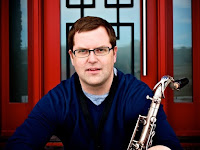 It's rare you find a Canadian jazz musician who is based in Calgary, Alberta, Canada - actually, it's rare that I receive a recording from one. Saxophonist, composer, and arranger Jim Brenan was born and raised in Edmonton, Alberta, studied jazz as an undergraduate at St. Francis Xavier University in Nova Scoti, then on to Rutgers (the State University of New Jersey) where he studied with Ralph Bowen and earned a Masters in Jazz Studies. During his time of study, he played with Kenny Barron, Kenny Wheeler,and Randy Brecker. After graduation, Brenan played lead tenor in Maynard Ferguson's Big Bop Nouveau Band.  Before returning to his native Canada, he taught at the University of Aukland in New Zealand.  Since 2004, he's been the Chair of the Theater, Speech, and Music Performance at Mount Royal University in Calgary. 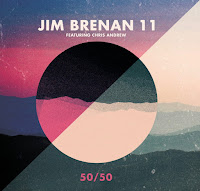 His third album as a leader, "50/50" (Death Defying Records), is credited to the Jim Brenan 11 featuring Chris Andrews (Fender Rhodes, clavinet). The undectet for this album is actually a duodectet (see Personnel below) and is composed of four reeds, two  trombones (including the leader's brother Craig), two trumpets, and four person rhythm section.  Much of the program is quite funky and soulful thanks to the powerful drumming of Jamie Cooper, the electric bass of Rubim De Toledo, and Andrews's electric keyboards.  Songs such as the title track and the closer, "Ozark Mountain Cougar Fightin'" absolutely kick butt, the former featuring Andrews on a lengthy solo and the latter a saxophone dialogue between the leader's tenor sax and the alto of Sean Craig or Mike Gardner. 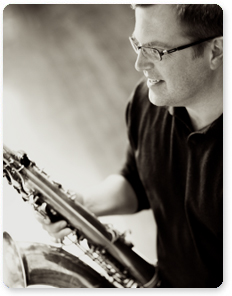 In many ways, Brenan's music and arrangements take the cues from the fusion music of the 1970s and 80s. There's more than a hint of Weather Reprt's "Sweetnighter" in the beats that permeate "Empress." "Hiding Place", a ballad that may remind some of Earth, Wind, and Fire, has quite the r'nb feel - dig the way the baritone sax joins the bassist as the two musicians hold down the bottom.   "Fant-O-Max" also has the feel of a Joe Zawinul. After the tension of the opening interaction of the reeds and brass against the drums, Brenan's soprano solo rises up and over the Cooper's driving beat. The Rhodes solo dances between the stereo channels and atop the powerful rhythms.

"Colossal Suite" is an episodic adventure as well as the longest track on the program  (11:14). After the trombone leads the piece in, the song has a thudding rhythmic drive a la heavy metal rock (De Toledo's bass creates the thud while Cooper's drums dance excitedly).  The next chapter of the "...Suite" is introduced by rollicking riff played by the ensemble before an uncredited alto sax solo. The rhythm section takes the piece with Andrews's "space" Rhodes joining the powerful bass-and-drums towards the finish line.

Jim Brenan learned several lessons from his mentors.  His time with Maynard Ferguson taught him how to rev up and audience and playing alongside Randy Brecker showed his that jazz can be funky and funk can be jazzy.  "50/50" is an album to be played loud so that the power generated from musicians can get you moving.  Solid solos, smart arrangements, and an excellent drummer (Jamie Cooper's tenure with the 35-member Royal Canadian Artillery Band certainly taught him how to be heard in a large ensemble) all coalesce to make the Jim Brenan 11 an enjoyable listening experience.

For more information about Jim Brenan, go to www.deathdefyingrecords.com/jim-brenan.