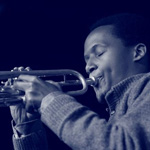 If you've been to Boston, Massachusetts, to catch live music over the past two decades, chances are the name Jason Palmer has come up more than once. If you are a fan of Nils Winther's SteepleChase label, Palmer has issued eight albums on the Danish imprint since 2010, including tributes to both the late Minnie Riperton and to Janelle Monae.  For the past several years, he has toured and recorded as a member of tenor saxophonist Noah Preminger's Quartet.  It is with that ensemble that I saw and heard Palmer play.  He's a joyous and serious musician, locked into the music and enjoying interacting with his fellow musicians.  He can be quite a powerful player but he is also supremely melodic. 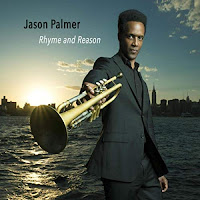 His new album, "Rhyme and Reason", is the initial releases on photographers/arts patrons Jimmy & Dena Katz's Giant Step Arts label.  Recorded over two nights in early June of 2018, the eight Palmer originals are performed by the trumpeter along with tenor saxophonist Mark Turner, drummer Kendrick Scott, and bassist Matt Brewer. They have recorded together before in different settings but this is the first time all four have appeared on the same album.  Kudos to Jimmy Katz for his engineering as the sound is bright and clear, the rhythm section is up front but never overwhelms the front line.  This music sounds great over headphones, blasting out of speakers in the house and car, and thanks to Scott and Brewer, it's impossible to sit still on the uptempo material.

As for the material, the eight tracks are spread over two CDs with only one cut under 11 minutes .  Three cuts - the title tracks, "Mark's Place", and "Kalispel Bay" - clock in at over 16 minutes. Yet, none of this music feels bloated. Every piece has a well-developed melody, harmonies, and delightful interplay. Sure, there are many long solos but each one of the players create witty and delightful statements.  What stands out to this listener is how much joy there is in this music.  It's apparent from the opening track "Herbs in a Glass", influenced both by particular pieces by August Greene ("Aya") and Herbie Hancock ("Tell Me a Bedtime Story" from "Fat Albert Rotunda").  Listen to how both Palmer and Turner float over the active drumming and powerful bass lines.

Just in case you think the album is just a "blowing session", give a listen to the title track. It's hard to initially choose who to listen to: could be the excellent drumming or the delightful bass counterpoint or you could concentrate on the soloists. Play the track several times back-to-back and you should come away at just how good, how alive, this music feels.

"Rhyme and Reason" is an album to savor, to soak up the sounds, to revel in the exuberance of such creative music, and how timeless this music feels.  So many different factors go in to the success of this music, from the long friendships of the musicians to the excellent and intelligent compositions to the exceptional sound of the recording.  Jason Palmer strikes gold with this music and the listeners are the beneficiaries.

For more information, go to www.jasonpalmermusic.com.

I mentioned above that this is the first project to be released by Giant Step Arts.  Photographer/ engineer Jimmy Katz and his wife Dena head the non-profit organization and their mission states:

"Our goal is to present unique premiere live performances  featuring some of modern jazz’s most innovative artists, all recorded for independent release and documented both photographically and on film. What is truly unprecedented about this endeavor is that the musicians have total control of their artistic projects. They will not only receive all the recordings and digital downloads of their musical output but will also retain complete ownership of their masters. Giant Step Arts is committed to promoting the projects and fostering the careers of their artists by providing them with promotional photo and video material and publicity."

For more information, go to www.giantsteparts.org.

Alto saxophonist, composer, and educator Jim Snidero has been playing, touring, and recording for nearly four decades. He studied with Phil Woods, attended the University of North Texas where he studied with Dave Liebman, moved to New York City after graduation to begin his professional career. He's toured with Brother Jack McDuff, Frank Wess, the Mingus Big Band, and the Toshiko Akiyoshi Jazz Orchestra (among others).  Over the decades, he has recorded albums for Double Time Jazz, Criss Cross Jazz, and, over the last dozen years, has recorded seven albums for Savant. He's currently on the faculty of the New School in New York City as well as the New Jersey City University. 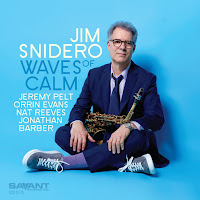 "Waves of Calm" is the saxophonist's eighth release for Savant and features Orrin Evans (piano, Fender Rhodes), Nat Reeves (bass), Jonathan Barber (drums), and Jeremey Pelt (trumpet). Snidero's father's ongoing struggle with Parkinson's Disease is one the primary influence on this project.  One can also hear the influence of Miles Davis on this music, especially noticeable on tracks where Evans is on electric piano and where Pelt is involved.  Snidero does not copy the legendary trumpeter but feeds into the spirit and sound of Davis's second "Classic Quintet".  Note the steadiness of Barber's beat on "Dad" and how the trumpet and alto sax play the melody and harmony. There's a sense of freedom and "flying" in the alto, no pity or sadness when he thinks of his father.  "Estuary" rides in on the gentle drumming and rippling Rhodes while Snidero and Pelt play a melody that has more intensity. The trumpeter rises above the rhythm section for a delightful solo that leads to a more introspective solo by Snidero and a sweet turn from Evans.  Bassist Nat Reeves is the foundation of this music, a subtle and thoughtful accompanist, never busy but always "there." 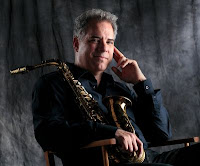 One cannot miss the sound of the blues on Willard Robison's classic"Old Folks."  When I hear this track, I think of Lou Donaldson and the joy plus blues feeling he has brought to his music over his 70+ years as a working musician.  Snidero does not imitate Donaldson either but there is a honesty in his blues that makes tracks like "Old Folks" and "I Fall in Love" so emotionally powerful.

The music on "Waves of Calm" is a smart blend of power and, yes, calm.  Influenced by his father, Jim Snidero, along with an excellent ensemble, creates a program that blends the modern influence of Miles Davis with classic blues ballads.  Give this music time to soak in because there are so many facets to the pieces and such excellent musicianship.

For more information, go to www.jimsnidero.com. 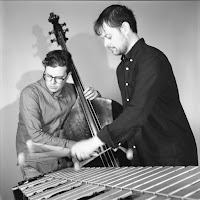 Vibraphonist Michael Davidson is a busy musician based Toronto, Canada.  He plays with numerous musicians, from guitarist David Occhipinti to drummer Nick Fraser to bassist/cellist Andrew Downing and many more.  He leads or co-leads several ensembles including a duo with bassist Dan Fortin.  Fortin is also based in Toronto, also a very busy musician touring and recording with Myriad3, Bernice, the chamber-jazz-pop band Queer Songbook, and guitarist Harley Card (among others).  Currently, he's working with saxophonist Tara Davidson and pianist Adrean Ferrugia's Playdate.  Both musicians keep busy schedules but found time to enter the studio in 2017. 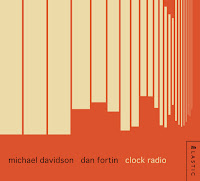 The results can be heard on "Clock Radio" (Elastic Recordings, the duo's now label). It's a engaging collection of pieces that reflect the many different genres they are a part of without being beholden to any one particular style. In the months before the recording, Davidson was in Germany studying with mallet master David Friedman: his studies are reflected in the program that Davidson composed for the duo and in the song titles, many of which are in German or have the word "Berlin" in the title. After the short, classically inspired "Tür" that opens the album, the duo moves in to "Berlin V" - that tune starts as if the melody and tone was along the lines of music by Gary Burton and Chick Corea but soon takes on a hypnotic and rhythmical feel. The vibes take the melody and, at times, the bass offers counterpoint.  The longest piece on the album, the musicians move easily away from the airy opening to a more intense conversation before moving back towards the opening. 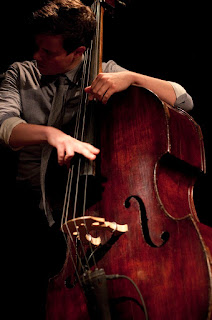 There's a playful feel to "Berlin I" and the musicians fascination with slowing down and picking the tempo back up.  They are literally and figuratively "playing" throughout this piece. "Berlin IV" is the most melodic of the five separate "Berlin" pieces. Fortin's thick bass sound and melodic solo stand out as does the dancing quality of Davidson's solo.  At the onset of "VII", the tracks juxtaposes electronic sounds with the high-powered, rhythmic, dance.  Note how the vibes echo the rhythm in the bass before the electronics return. "VI" is a slow-paced conversation, with stops and starts, quick riffs from the vibes over slow bass lines.

"A Lift Above" opens with a rapid-fire, repetitive, solo from the vibes before Fortin enters with a throbbing bass line plus the melody is picked up by synth.  The duo weave in and around the melody before a mysterious yet lovely close.  "H Moll (Zeitweisse)" has a strong classical feel, a touch of JS Bach right before the melodic bass solo.  As Fortin comes out of his solo, Davidson takes off on a delightful romp. There's also a short vibes overdub right before the close. The album immediately jumps into the lovely ballad "Out of Love" - here, the synth work colors the lovely melody provided by the vibes and underscored by the bass. 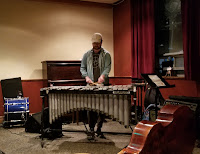 Therein lies the pleasure of "Clock Radio."  First time through, the listener is not sure what to expect. Upon further exploration, there are plenty of musical avenues to follow. This is music that demands your attention, that asks you to trust the musicians to take you on a journey that will, in the end, be rewarding.  Listen all the way through and , when you arrive at the closing short track "Doorway", you should realize that the music has come full circle and you are invited to jump right back in.  I imagine this music is just as fascinating, if not more, in person.  As stated above both Michael Davidson and Dan Fortin are busy musicians so catching a show by the duo may be rare.

For more information, go to www.elasticrecordings.com.

Here's the delightful "Berlin I":