The Matthew Shipp Trio - Newman Taylor Baker (drums), Matt Shipp (piano, compositions), and Michael Bisio (bass) - has been a unit for the past five years and you can hear their familiarity with each other every time they hit the stage or create a recording.  Because the leader takes chances, the bassist and drummer are encouraged to do so as well. In fact, the material Ship writes for the group calls for that.  They do not make "wine bar music"; instead, this music asks the listener for total concentration. 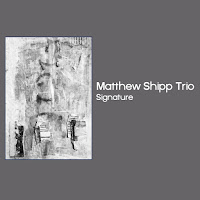 "Signature" (ESP) is the third album by this particular version of the Trio. To my ears, it's the best.  One reason is that it is the best-sounding recording that Shipp has ever made in my memory.  Many of the earlier mixes were too "compressed" for my ears but here you can clearly hear each instrument. The piano is clear and ringing, the drums sharp and the cymbals crystalline, and the bass thick and deep.  There is stunning lyricism in the opening solo piano passages of the title track and the majority of the piece like a piece by Herbie Nichols but with a more elastic rhythm.  Listen to how the piano rumbles at the onset of "Flying Saucers" plus the brilliant, rapid-fire riffs from Bisio. Throughout the album, the playing of Newman Taylor Baker stands out, not just for his amazing rhythmic drive but for the sounds he chooses to play under the solos. Check out his active drumming and fascinating cymbal work on "The Way", how both the piano and bass move with him and without.

Thanks to the excellent recording and mix that I referred to above, every track is a gem.  Even the three short solo pieces:  Bisio's droning bow work is featured on the 49-second "Deep to Deep" while Newman Baker's two-minute solo is appropriately titled "Snap." Later in the program, "New Z" is another solo percussion piece, with hand-held sounds plus impressive cymbal work covering nearly four minutes.  That leads into "This Matrix" which, at 16:25, is the longest cut on the disk.  There's a lot to enjoy here, from the rippling piano phrases to the dancing bass lines to the helter-skelter drumming that pushes the piece forward.   Shipp is in charge for the first nine minutes before he and Newman Baker drop out for a fine bass solo, one filled with melody and thoughtful use of silence before building to a rapid-fire closing.  What follows is a short ballad for bass and piano, joined shortly by Newman Taylor Baker on brushes.  There's quite a blues feel in the last several minutes of the program and the ending is delightfully subtle. There's a slow yet determined push towards the close - on first listen, it seemed the music just stopped but really, it feels as if the conversation stopped in mid-sentence.

"Signature" is splendid music, well-played, creative, powerful, gentle at times, and certainly modern music at its best.  The Matthew Shipp Trio was quite impressive for the decade+ when Whit Dickey was in the drum chair but Newman Taylor Baker brings a different dimension that has energized both pianist Matthew Shipp and bassist Michael Bisio.  I wrote that, to my ears this is the finest recording these three musicians have made as a unit; this certainly is one of the top three recordings Matthew Shipp has made.

For more information, go to www.espdisk.com/catalogue/5000list.html/5029.html.

Drummer and composer Jeff Cosgrove, a native of the Washington, D.C. area, is fond of playing in and recording with trios.  His most recent albums include dates with Scott Robinson and Ken Filiano plus Frank Kimbrough and Martin Wind.  Over the past several years, he has recorded a trio featuring bassist William Parker and pianist Matthew Shipp (the pianist has recorded a total of seven times with the drummer), self-releasing two albums both of which feature three improvisations that cover a lot of musical territory.  The communication between the three musicians seem telepathic; each player not only does his "own thing" but also works towards a common goal - creating memorable interactions that listeners can return to time and again, hearing new connections each time. 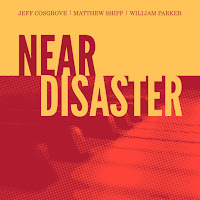 The trio now has a third release. "Near Disaster" continues the group's improvisatory adventures. Over the course of three lengthy tracks, the longest, "October Nights Sky", at 35+ minutes, the shortest, "Last Steps, First", at 9, the band gets loose. The music they create is extremely powerful with cascading riffs from Shipp, melodic underpinning from Parker, and all propelled by Cosgrove's drums. he's quite active, reminding this listener of both levin Jones and, especially, Andrew Cyrille.  It's obvious throughout that the drummer responds to his bandmates and vice versa.

The music asks the listener to "go with the flow" - the flow is there, rarely collapsing into a "free-for-all". Notice the intensity and melodicism that inhabit the quiet moments of "...Nights Sky" and how that remains when Cosgrove and Shipp begin to power forward.  The opening of "Spherical" serves as an homage to Thelonious Monk (perhaps where the title comes from?) before the trio digs in and takes the music on quite a journey. Listen to how Parker creates such a danceable feel underneath as Cosgrove interacts with the piano.  This is what appeals to me about improvisatory music, how the musicians create new ideas from what one person plays and then go off in unexpected directions.

Take your time to delve into "Near Disaster", don't ignore the noise because, throughout the album, the music coalesces into many fascinating turns-of-phrase and musician interactions.  Most of us know what Matthew Shipp and Williams Parker have contributed to creative music over the past three decades. Jeff Cosgrove, who keeps quite a busy performance schedule in the D.C.-Maryland-Virginia area, is a force to be reckoned with, not only as a musician but also a catalyst for bringing artists together from different areas of creative music.