In late February of 2021, bassist and composer Mario Pavone enters a studio in Tampa, FL, to record an album with his son Michael (guitar), Mike DiRubbo (alto saxophone), and long-time associate Michael Sarin (drums).  The bassist knew he was losing his long battle with cancer plus he had been deeply saddened by the 2020 loss of his granddaughter Isabella. Pavone organized a book of new compositions, sent them to trumpeter/ arranger Dave Ballou to prepare for a recording session. The bassist and arranger agreed that the pieces would be recorded by two different quartets, the first with the three Michaels and the second (recorded four weeks later)with Pavone's Dialect Trio (pianist Matt Mitchell and drummer Tyshawn Sorey with Ballou as guest performer), an album titled "Blue Vertical" and released by Out of Our Heads Records (my review is here). 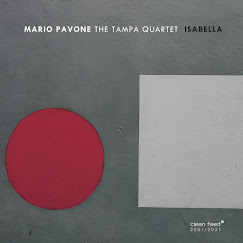 "Isabella" (Clean Feed Records), like "Blue Vertical", is a powerful collection of original pieces filled with strong melodies and excellent musicianship.  Most Pavone fans will buy both albums and compare them yet each stands on its own merits.  Michael Pavone has had a busy sideman career playing with the likes of saxophonist Dewey Redman and and vocalist Bobby McFerrin; the only album that I can find where he is the leader is a 2001 Trio date with his father and drummer Marcello Pellitteri that appeared on Playscape Recordings.  His sound is clean, not unlike, at times, John Abercrombie and his father's close friend Michael Musillami–– check him out on "2/3rds Radial", you'll hear the former while on the hard-rocking "Philosophy Series", there is the influence of the latter. Saxophonist DiRubbo has also worked and recorded with the bassist in numerous occasion; his bright sound and rapid-fire lines enlighten pieces such as "Good Treble" and "Twardzik".

As for Michael Sarin, he and bassist Pavone have a relationship that stretches back three decades to the drummer's debut with the Thomas Chapin Trio.  He really shines on all these pieces, driving hard when needs be or supporting with his whisper-soft brushes work (check him out on the title track).  You can hear how he leaves room for the bass –– if you have listened to any of Pavone's recordings, you know what a powerful and creative player he is. There is no diminution in his bass work on either album but he is more present in the mix on "Isabella" and that could be due to the fact the guitar is quieter than the piano on "Blue Vertical".

"Isabella" is a delightful collection with great playing and subtle, witty, interplay from Mario Pavone and the three Michaels.  If you already own "Blue Vertical" which has a similar program, it's educational as well as entertaining to listen to both recordings.  Since his passing, I have been listening to the many and varied recordings from Mario Pavone's career and these two final albums are right up there with his best efforts.

For more information, go to www.mariopavone.com.  To hear more tracks and to purchase the recording, go to https://cleanfeedrecords.bandcamp.com/album/isabella. 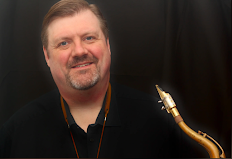 Saxophonist Joel Frahm, a graduate of the prestigious Hall High School Jazz Program in West Hartford, has a delightful career playing alongside bassist Ben Allison, fellow Hall High grad Brad Mehldau, Andrew Hill, Betty Carter, Matt Wilson, Dafnis Prieto (in his Big Band), and so many more.  He joined drummer Ernesto Cervini's Quartet in 2008 and is also a member of Cervini's sextet Turboprop.  Frahm has not released an album as a leader since 2011's "Live at Small's", a quartet date with guitarist Kurt Rosenwinkel. His new album, "The Bright Side" (Anzic Records), came about after a Turboprop workshop in Toronto, Canada, when Cervini and bassist Dan Loomis decided to book gigs with the saxophonist as a trio 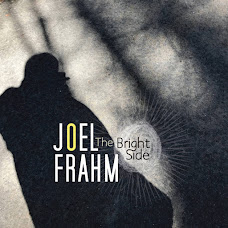 The new recording, recorded in 2019, consists of original works,  seven from the leader, two from Loomis, and one from Cervini. The 10-song program opens with Frahm's "Blow Poppa Joe" which jumps right out of the gate with powerful tenor sax work (a la Sonny Rollins), thunderous drums, and splendid counterpoint from the bass. The first two notes of the next track, "Waiting for Benny", sound like we're in for an old television theme song ("The Andy Griffith Show") but quickly moves into a medium-paced romp over which Frahm's tenor soars, dances, his phrases twisting and turning with glee.  There's also a delightful bass solo (Loomis can be quite melodic in the spotlight) over Cervini's whispering brush work. The drummer then "trades 4s" with his mates. The leader brings out his soprano sax for Loomis's "Silk Road", an emotionally rich ballad with a mysterious feel, gentle playing, and, again, intelligent interplay. There's a moment in the final 90 seconds when it sounds as if the music is turning in a "free" direction before the soprano tamps down the intensity.  The bassist's other contribution is the hard-bopping "X Friends", a smoker with delightful solos from Frahm and the drummer. 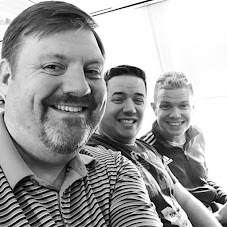 Cervini contributes "The Beautiful Mystery" which is truly a beautiful ballad, moves ever-so-slowly but never drags. Opening with Loomis's rich bass overtones, the saxophonist enter with the somber melody while the composer moves around the cymbals and floor tom.  Again, listen for the bass counterpoint as it is quite impressive.
If you have ever seen Joel Frahm live in person, you know he's got quite the sense of humor. The title track closes the album, its rhythm patterns based on Lou Reed's delightful groove on his "Walk on the Wild Side".  The rhythm section dances right along with the soulful sax riffs.
"The Bright Side" has many "bright moments" throughout as the program displays the saxophonist's joyful sound.  Over the years, he's developed into a fine composer and soloist. And he's quite "in the groove" with Dan Loomis and Ernesto Cervini who he has played with for over a decade.  Sit down, pour a cool glass of your favorite libation, and allow this fine album
to lift your soul!
For more information, go to joelfrahm.com.
Dig the title track:
Posted by Richard B. Kamins at 6:03 PM