When drummer, percussionist, and composer Ches Smith lived in the San Francisco Bay Area in 2000, one of his gigs was to accompany a Haitian dance class. He soon moved to NewYork City where he began to play and record with guitarists Mary Halvorson, Nels Cline, and Marc Ribot plus saxophonists Tim Berne, John Zorn, and Darius Jones.  Smith also began to immerse himself in Haitian music, picking up several mentors along the way and began to incorporate the various rhythms in his music.  In 2015, he went into the studio with pianist Matt Mitchell and master percussionists Daniel Brevil and Markus Schwartz to record an album of instrumentals and chants under the monicker of We All Break.  Issued only on Bandcamp, the album received very little publicity. 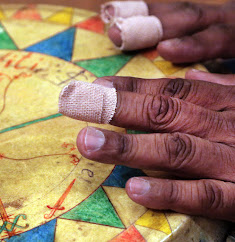 We All Break has expanded to twice its original size with the addition of vocalist Sirene Dantor Rene, acoustic bassist Nick Dunston, drummer/ vocalist Fanfan Jean-Guy Rene, and alto saxophonist Miguel Zenón.  The octet's new album, "Path of Seven Colors" (Pyroclastic Records), expands upon the ideas of the debut album (included at no extra cost if you purchase the CD –– you should do that because it's one of the loveliest packages on the market today).  One can know hear how Smith and company are able to be more melodic and more experimental.  From the opening minutes of the first track "Woule Poe Mwen" ("Roll it for Me") when the hand percussion and rolling piano lines usher in the lead singer and vocal responses, you hear the more traditional Haitian music. Whereas the first voice you hear on the following track "Here's The Light" is Miguel Zenon's expressive alto saxophone. The male and female leads tell their story with the choir gently ululating in response.  The saxophonist's expansive solo over the poly-rhythmic piano, bass, and drums not only channels the voices but also the spirit of traditional music
Four of the eight tracks are over nine minutes and are episodic in that they incorporate several melodies and rhythms. "Leaves Arrive" (9:39) with Ms. Dantour leading the chorus in a chant praising the great forest and the spirit over minimalist accompaniment.  The rhythm picks up led by the voices and clapping hands. When the voices depart, Zenón and Dunston lead the melody in; both solo over the powerful drumming aided by Mitchell's percussive piano lines. "Lord of Healing" (13:36) is the longest track. Mitchell quietly leads in the melody, Daniel Brevil takes over, first singing by himself and then joined by the choir.  There's a long section for solos –– Mitchell and Zenón create impressive improvisations over the drums and bass (Dunston is described in the liner notes as the "fifth drummer" – he's all that and a melodic powerhouse as well) and the music becomes more exciting and intense.
The music rolls forward throughout the album. The program is a delightful hybrid, asking the listener to accept the traditional songs with the modern themes of Ches Smith's original music.  And it works very well.  The vocals, with deep roots in the tradition,  help to "ground" the music, giving the musicians the freedom to explore. When you listen to the title track, the piano opening is modern and angular but when the drums enter, the music, with its blend of ancient and contemporary, feels timeless (Mitchell's solo work is stunning throughout).
"Path of Seven Colors" is an absorbing, exciting, musical adventure.  Blending the spiritual and community aspects of Vodou music with Black American music and concepts Ches Smith & We All Break has surprised the listener and soothed him/her at the same time.  Go, get lost in the amazing aural adventure.
For more information about the leader, go to www.chessmith.com.  Bobby Sanabria just published an excellent overview and has a link to the documentary film by Mimi Chakarova on the WBGO-FM website –– go to www.wbgo.org/music/2021-06-09/ches-smith-and-we-all-break-meld-haitian-vodou-and-jazz-on-path-of-seven-colors.
Hear "Here's the Light":
Posted by Richard B. Kamins at 10:32 AM