As these words appear on the page, it's five weeks since Mario Pavone passed (May 15, 2021) after a multi-year, multi-episode, fight with cancer.  Bassist, composer, and educator (he was closely involved with the Litchfield Jazz Camp), he had a long career working alongside creative artists, most notably Bill Dixon, Anthony Braxton, Paul Bley, and Thomas Chapin. After Chapin's death in 1998, Mr. Pavone became a leader – he had already begun recording his own music back in 1979 on labels such as Alacra, New World/Crosscurrents, and Knitting Factory. From 2002-2017, the bassist recorded 13 albums (as a leader or co-leader for his good friend Michael Musillami's Playscape Recordings; he also did the artwork for many of the label's releases. When queried about his writing, he told me his pieces were "composed from the bass upwards" and, when you listen closely, you hear how the rhythm section always participates in the melody.  His music is propulsive, even fierce at times but always with a melodic center.

Last time we spoke in person (three years ago at Firehouse 12 in New Haven, CT –– he was a concert attendee not a player), he was thrilled about his latest Trio.  He loved writing for and playing alongside pianist Matt Mitchell and drummer Tyshawn Sorey.  He felt that they brought the ferocity and emotional balance that his new compositions called for.  They first recorded as a unit on 2015's "Blue Dialect" (Clean Feed Records) and followed that with 2019's "Philosophy" (Clean Feed). 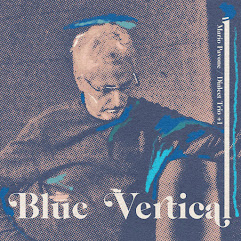 2020 was a very tough year for the bassist. His cancer had returned plus his 23-year old granddaughter Isabella died. Mr. Pavone poured himself into his music writing enough material for two albums, two groups.  In late February, he went into the studio with his son Michael (guitar), Mike DiRubbo (alto saxophone), and Michael Sarin (drummer who was the third member of the Thomas Chapin Trio) and recorded an album for Clean Feed ("Isabella", to be released later this month). Four weeks after that session (3/25-26/21), he went into the studio with Mitchell, Sorey, and trumpeter/ arranger Dave Ballou (who served as arranger for "Isabella" as well) and recorded "Blue Vertical" (Out of Your Heads Records).  Credited to the Dialect Trio + 1, the nine-song program sounds full of life, jammed with melodies, rhythmic twists-and-turns, powerful solos, and Mr. Pavone's trademark propulsive. forward motion. He never looked back, making the music for the time and the future.
The addition of Ballou's excellent trumpet work to the Trio fired the composer's imagination. Pieces such as the opener "Twardzik" and "Good Treble" show his versatility and wit; the former features a delightful solo, with notes tumbling out of the horn and onto the rumbling rhythm section while the latter dances ahead on a Latin-tinged rhythm, the muted trumpet locking in with the piano for the melody. Ballou's solo over the jagged rhythm exudes swagger and a New Orleans-like frisson opening the door for Mitchell's rippling lines over Sorey's mighty drums.  "Isabella" shows the bassist at his best, his counterpoint to the melody setting the tenor for the solos.  The pianist's impressionistic lines connect with the bass lines, creating a duet that is ethereal.  Ballou's muted trumpet joins that conversation, his long tones supported by the whispering cymbals. Sorey's whip-snapping drums at the onset of "Legacy Stories" set the pace for an exciting performance (note how the bass and drums fall into a "swing" rhythm right before the piano solo).
The album closes with "Face Music", the composer's percussive plucked notes and the tolling piano chords wrapping around the somber trumpet melody.  The music moves slowly, tentatively but with purpose until Sorey's rapid-fire high-hat dance pushes the trumpet solo higher and, eventually, the piano and bass join the mix.  The piece closes on Mitchell's abrupt note with the expectation that there was more to be said.
Mario Pavone lives on in his music and the fact that people will continue to explore his oeuvre, perhaps even recording pieces from his repertoire, gives this writer great hope.  If you are not familiar with his music, know that from his earliest recordings as a leader to "Blue Vertical", Mario Pavone led from the heart.
For more information, go to www.mariopavone.com.  To hear more and purchase the new album, go to https://outofyourheadrecords.bandcamp.com/album/blue-vertical.
Hear "Philosophy Series":
Posted by Richard B. Kamins at 11:49 AM