History In the Present Tense

For the first 2/3rds (or so) of the 20th Century, Black Creative Music was concerned with "today"or "looking to tomorrow, to a better day". With the passing of John Coltrane, the music seemed, in the public eye, to stall only to be rejuvenated the following decade by the work of Chicago's AACM but soon retreated again under the onslaught of new, more commercial, developments such as hip-hop and rap, as well as the rise of the Neo-Conservatives.  Still, many artists in the 21st Century have figured out how to keep one foot in the past, the other in the present, and an eye to the future.

Over the past decade+, tenor saxophonist, composer, and poet James Brandon Lewis has been receiving more and more attention for his creative approaches to Black Music.  He's issued six albums as a leader, two co-lead with drummer/ mbira player Chad Taylor, and is one of the co-founders of the poetry/ music/ performance art ensemble Heroes Are Gang Leaders.  His tone on tenor saxophone hearkens back to John Coltrane and Archie Shepp but his music takes its directions form artists such as Henry Threadgill, the Art Ensemble of Chicago, Julius Hemphill, and Oliver Lake.  After graduating from Howard University in 2006, the Buffalo, NY, native spent several years in Colorado playing gospel music. Lewis did his graduate work at CalArts, studying with Charlie Haden and Wadada Leo Smith (and others) before moving to New York City in 2012.  There, he began playing with pianist Marilyn Crispell, vibraphonist Karl Berger, pianist Eri Yamamoto, and fellow tenor saxophonist Charle Gayle.  His debut CD, "Moments", was self-released in 2010; since then, he's released two albums on Okeh Music, one each on BNS Records and Intakt Music, and, in 2019, Relative Pitch released "An Unruly Manifesto". 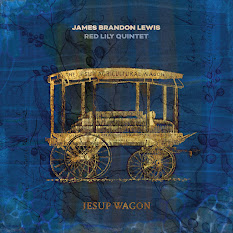 His new album, "Jesup Wagon" (Tao Forms), was recorded during the pandemic and tells the story of Dr. George Washington Carver (1864-1943). Born in the South before the end of the Civil War, Dr. Carver went on study at Iowa State Agricultural College and started at Tuskegee University in Alabama in 1896 becoming the Director of the Agricultural Experimentation Station the following year. Most people know of the work he did with peanuts but he also found over 100 uses for sweet potatoes but was also an artist (the album cover is his painting), a musician (he played piano and accordion), and was an early environmentalist.  Dr. Carver believed that science and art worked hand-in-hand to create a fuller human being. When Lewis was a young student, he was very interested in Science and wrote a paper on Dr. Carver. With the release of the new album, Lewis can not only celebrate the life of an amazing person but also give the listener a bigger picture of his accomplishments. 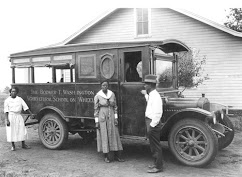 The album takes its name from from the movable science Experiment Station that Dr. Carver designed in 1906 (pictured left) as a mobile school to help poor Black farmers in Alabama.  Because the vehicle was loaded down, the station moved quite slowly. Still, it moved through the countryside helping as many people as possible.  To tell this story and to have resonate with the sounds of the Deep South, Lewis populates his songs with the sounds of the Red Lily Quintet, a group composed of Kirk Knuffke (cornet), Chad Taylor (drums, mbira), William Parker (bass, gimbri - which is a three-string bass lute), and Chris Hoffman (cello).  This music may remind one of Julius Hemphill's "Dogon A.D." or some of the pieces Henry Threadgill composed for Air and his Sextett. 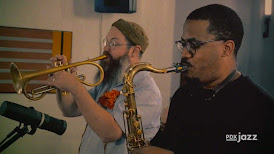 The title song opens the album – in fact, Lewis opens the album unaccompanied playing a blues melody, blatting out low notes, squealing now and then. The band enters and we are dancing forward on the hard blues of Knuffke's cornet. Pay attention to the rhythm section, to the plucked cello and thumping bass and, especially to the raucous, hard dancing drums. Parker's gimbri plays a 4-note figure that leads in the drums, cowbell, and hand percussion plus Hoffman's cello for "Lowlands of Sorrow". The song, named for the conditions Dr. Carver found when he arrived at the fields that the sharecroppers used to grow what they could under adverse conditions. Lewis's tumultuous tenor spars with the crisp sounds of the cornet –– their "conversation" over the roiling rhythm section drive the piece to its quiet conclusion. 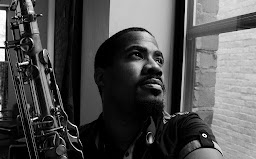 This powerful music rarely lets up. From the fugue-like opening of "Arachis" which leads to a rumbling free-blowing mid-section to the dancing rhythms of "Fallen Flowers" (Hoffman's bowed then plucked solo over just drums and bass stands out) to the relentless drive of "Experiment Station", Taylor pushes the band from his drum seat while Lewis's tenor sax roars, Knuffke's cornet crackles, Hoffman's cello shines in counterpoint, and Parker's bass holds the proceedings together.
Put simply, "Jesup Wagon" is a great album, certainly one of the best releases in the past 18 months. Not only does James Brandon Lewis weave a compelling narrative about the genius that was Dr George Washington Carver but also subtly reminds the listener of the hardships Black people had in the United States through the first half of the 20th Century (and beyond).  Another highlight of the album package is the excellent and comprehensive essay from author Robin D. G. Kelley. This music of the Red Lily Quintet will certainly challenge you but the rewards are great.
For more information, go to www.jblewis.com/.  To listen to and purchase "Jesup Wagon", go to  https://jamesbrandonlewis.bandcamp.com/album/jesup-wagon.
Dan Blake (tenor and soprano saxophones), like many of his contemporaries, is a multi-faceted composer. He has recorded and released three albums is the jazz genre plus has composed for the contemporary classical Mivos Quartet as well as a Chamber Orchestra and done several soundtracks for short films.  He studied at the New England Conservatory of Music and Tufts University (working n two degrees simultaneously.  Among the people he studied music with was Steve Lacy, Danilo Perez, Robert Dick, and composer Tania Leon.  He has played and recorded with percussionist Rogerio Boccato, Anthony Braxton, Esperanza Spalding, and keyboard artist Leo Genovese. 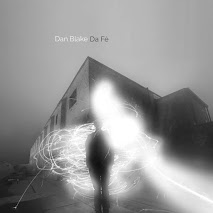 His fourth album (second for Sunnyside Records), "Da Fé", features Carmen Staaf (piano, Fender Rhodes), Dmitri Ishenko (acoustic and electric basses), and Jeff Williams (drums) plus Leo Genovese (synths, electric keyboards, Fender Rhodes, acoustic piano).  While Blake's 2016 Sunnyside release "The Digging", was basically a trio album (bassist Ishenko and drummer Eric Harland) that had a "freer" sound, "Da Fé" covers a wider swath of musical territory owing to the work of John Coltrane in the 60s and Wayne Shorter in the 80s through the present day.  Pieces such as "Fish in Puddles" and "Cry In The East" feature strong piano work from Ms. Staaf and the impressive, open-ended, drumming of Williams.  The solid rhythm section gives the Blake's soprano plenty of support to express its feeling of freedom, of soaring through cloudless skies. The addition of Genovese's slippery synth work on "...Puddles" and Blake's overdubbed sopranos during the last 90 seconds adds more heft.

The opening of "Dr. Armchair" explodes with shards of sound from the piano and soprano before Blake and Ms. Staff play the melody.  While the rhythm section keeps a steady beat, the front line go on wild ride.  They move back to and away from melody led by the crashing phrases of the pianist.  Then the song just stops.  There's an urgency to the tenor saxophone on "The Grifter"; as Ms. Staff moves into her solo, the bassist and drummer settle down but the pianist soon pushes to intense interactions.  The tenor solo stays fairly straight-ahead and delightfully melodic until the end when Genovese's synths swoop and the overdubbed tenor .  Blake's overdubbed tenors introduce "The Cliff (Waat)" playing a repetitive figure while the rhythm section push against him and finally join in the fragmented melody.  Soon, several tenors saxes are soloing as is Ms. Staaf while the bass and drums thunder below.  Ishenko's short bass solo quiets the piece down but not for long.
The title track ("Da Fé" translate to "of faith") rolls in on a steady pulse with Genovese's synths burbling out of the right and left speakers while Blake's soprano chase them in and out of the mix.  Slowly but steadily the piece takes shape especially on the entry of the acoustic piano.  The Shorter influence is quite evident here not so much in the sounds of the soprano sax but with the chattering synthesizers and the long, angular, melody that is played throughout the first half of the 6:30 piece until when Blake takes off on a rambunctious solo shadowed by his recorded loops.
The "Epilogue – It Heals Itself" is more than an afterthought but a full-throated (Blake on several sopranos and tenors) prayer for a better world.  While the quartet recorded before the Pandemic, both Leo Genovese and Dan Blake spent a day each in the studio adding and overdubbing, filling out the sound changing the density of the music but not the intentions. "Da Fé" illustrates how the saxophonist and composer has matured, how his writing has developed, and how his ideas/ beliefs are clearer to the listener.  Give a listen, give more –– enjoy!
For more information, go to danielblake.net/.  To hear more and to purchase the album, go to https://theaquariansuite.bandcamp.com/album/da-f.
Listen to the title track:
Posted by Richard B. Kamins at 4:06 PM