Most readers of this blog know just how much I love Large Ensemble Music. In the next four weeks, there will be, at least, five new Big Band albums released (plus one already issued that I just received) and each one is worth exploring. This post does not have reviews per se but, hopefully, will whet your appetite to check these out. 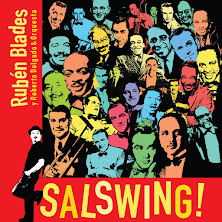 Singer and actor Rubén Blades, born in Panama, made his recording debut on 1970 on Fania Records singing in front of the Pete Rodriguez Orquesta.  Since then, he has appeared on numerous recordings as a leader or co-leader (nearly 40) –– he's also appeared in 40 movies plus had/ has recurring roles on several television series.  He's also been active politically.  On April 16, Blades can be heard with Roberto Delgado & Orquesta on "SALSWING" (Rubén Blades Productions), his third album with this band over the past six years; this is the first of the three that contains English vocals.  Looking at the cover, you can see the myriad influences on Blades and the musicians in the Orquesta.  He's in excellent voice here, even "crooning" a la Frank Sinatra at times, and the musicianship of the large ensemble is top-notch.

To find out more, go to http://rubenblades.com/. 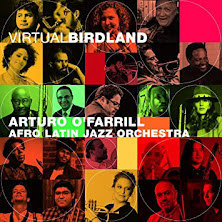 "Virtual Birdland" (ZOHO Records) is the latest album from Arturo O'Farrill and The Afro Latin Jazz Orchestra. At the onset of the COVID-19 pandemic, the ALJO created an "Emergency Fund" for freelance musicians whose livelihood had ground to a halt, and also began a weekly stream of full-length concerts called "Virtual Birdland".  You can see the concert streams on YouTube.  For those streams and the album, all of the musicians and guests were recorded in their homes (throughout the world). Same thing for the album where all the musicians' contributions were mixed together in Kuwait by engineer Amin Farid Abdal. The music sounds live, lively, filled with smart arrangements and great solos.  The various guests, who include saxophonist Paquito D' Rivera, French-American vocalist Malika Zarra, Kuwaiti guitarist and vocalist Ghazi Faisal Al-Mulaifi, and Kuwaiti percussion ensemble Boom Diwan.  You'll won't be able to keep yourself from dancing to this music!  The album, released on April 9, is basically the "Best of" the weekly concert series.
For more information, go to https://afrolatinjazz.org/  or http://zohomusic.com/cds/ofarrill_virtualbirdland.html.
Here's a way to contribute to the latest fundraiser, "Sustain The Groove", organized by Afro Latin Jazz Alliance of New York:
https://charity.gofundme.com/o/en/campaign/sustain-the-groove.
Here's the "album release" video: 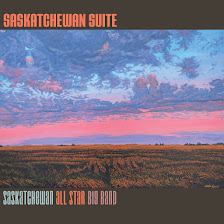 On April 19, Chronograph Records of Canada will issue "Saskatchewan Suite", a powerful new recording by the Saskatchewan All Star Big Band.  The 21-member ensemble, composed of musicians born or raised or currently living in the Province, was organized to play this "Suite" by the Regina Jazz Society who recruited composer, arranger, and pianist Fred Stride to write a musical history of the Canadian Province, from its days as a part of the lands of the First Nations, then the influx of immigrants, surviving the harsh winters and so much more. Many of the players are known beyond the Canadian border.  The music was recorded live in front of an enthusiastic audience.
To find out more, go to https://chronographrecords.com/artists/saskatchewan-all-star-big-band/. 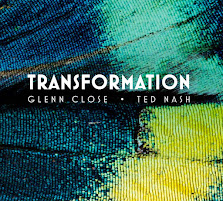 Actress Glenn Close and saxophonist/ composer Ted Nash have a fascinating new collaboration that they recorded with the Lincoln Center Jazz Orchestra and special guests Amy Irving, Wayne Brady, Matthew Stevenson, and the saxophonist's son Eli.  "Transformation" (Tiger Turn - issued on May 7) tells stories of change, most times personal but also communal. Recorded live in concert just weeks before the COVID pandemic shut down venues around the globe, the stories are powerful, the music never gets in the way of the words, and the Wayne Brady piece (which he wrote and performed) will change your opinion of him forever! The Orchestra, as usual, plays with power and grace with solos from many members sprinkled throughout the 11-song program.
For more information, go to www.broadwayworld.com/cabaret/article/BWW-Interview-Glenn-Close-And-Ted-Nash-of-TRANSFORMATION-at-Jazz-At-Lincoln-Center-20200124.
Here are the two principals talking about the project: 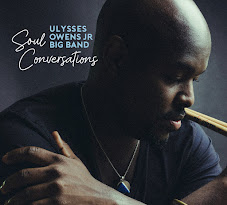 Over the past decade, drummer/ composer/ conceptualist Ulysses Owens Jr. has been busy as a leader and sideman.  Now, he's released his first Big Band album––"Soul Conversations" (Outside In Music) blends blues, swing, bebop, pop music, hard bop, and more into a delightful 73-minute adventure. Recorded over three nights in concert at Dizzy’s Club at Jazz at Lincoln Center, the 17-piece ensemble is filled with fine young players from the New York City area plus several veterans (for example, trombonist and associate co-producer Michael Dease) as well as several guests (including vibraphonist Stefon Harris). There are moments when the Band roars with excitement as well as quieter passages that are emotionally rich. The album hits the stores and online on May 7.
For more information, go to www.usojazzy.com/.
Here's the delightful opening track: 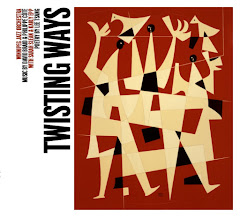