The Music That has Taken Me Through.....

This pandemic has shaken up everyone's world.  Illnesses are exaggerated, masks are a necessity (not for all but those non-wearers are chancing fate), and we all know someone or ones who has/ have passed. The past month has been quite an emotional time for our family and, while I have not been able to write, I have been listening to a lot of music. This post will include several that have stood out! 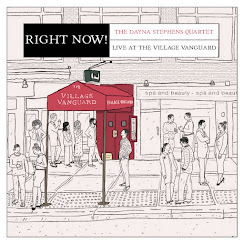 Looking at the cover of the new Dayna Stevens 2-CD set, "Right Now: Live at the Village Vanguard" (Contagious Music), just might bring a tear or two to one's eyes. People mingling outside the NYC nightclub, no masks, conversations aplenty, is a sight for sore eyes. Listening to the album might just do the same.  You are posited at a front row table at the Vanguard, the quartet––Stephens (tenor and soprano saxes, EWI), Aaron Parks (piano), Ben Street (bass), and Gregory Hutchinson (drums)––goes through two sets of original material throughout his catalog plus several new pieces (and one Parks composition).  It seems civilized.  The band is fine shape, the leader enjoying their company, and the crowd excited and responsive.  Listen to how the rhythm section pushes Stephens to dig deeply on pieces such as the bluesy "Lesson One" and how the Caribbean rhythms pulsate throughout "Tarifa" (listen below). Stephens playful soprano sax lines are a highlight of the program. 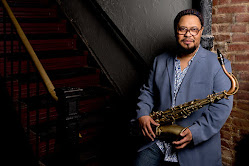 Stephens switches to his EWI (electronic wind instrument) once in each set. His instrument is connected to a Leslie Speaker (the kind often associated with the Hammond B-3 organ) and he exploits that sound on the album's final track "Blakonian Groove" (dedicated to drummer Johnathan Blake)––the piece starts slowly but once Hutchinson starts kicking hard, the moves moves forward with a purpose. In the first set, "Radio-Active Earworm" takes a more introspective approach especially after the leaders long introduction, pianist Parks steps into a handsome musical canvas that builds up to Stephens powerful solo.  The EWI takes on more of a "synth-sound" yet never feels contrived or forced.

There's plenty of fine music on "Right Now!" from the running start of the opening track "Smoking Gun" to the  Thelonious Monk-inspired  "You Are Me Blues" to the rambunctious "JFK International" and more. Like the best Black American Music, the rhythm section deserves kudos for lighting the fires underneath Dayna Stephens and Aaron Parks while Stephens gets extra credit for doing such an excellent job mining her repertoire.  Live music indeed––enjoy!

For more information, go to daynastephens.net/.  To purchase the specially-priced album, go to https://daynastephens.bandcamp.com/album/right-now-live-at-the-village-vanguard. 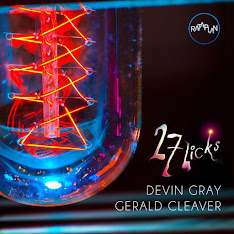 Drummer and percussionist Devin Gray was in awe of drummer and percussionist Gerald Cleaver long before they met in 2006––the awe melted into respect as they became friends and musical experimenters.  "27 Licks" (Rataplan Records) is described by Gray as "....a small capture of our “just another day” vibe in the farming of our musical lives."  Nine tracks, 42 minutes, all drums, many rhythms, a delightful conversation during which you can hear all influences disappear and the joy of playing reigns supreme.  It's a waste of time to try and figure out who's playing which part, what's written and what's not––instead, go with their flow and listen with your feet and your body.  Let the songs roll around in your brain, play it loud.
To find out more and to purchase the album, go to https://rataplanrecordsnyc.bandcamp.com/album/27-licks.
Click here to check out "The F-Train Drain"! 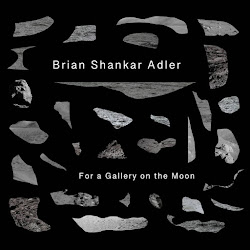 Brian Shankar Adler goes it alone in the studio for his latest album. "For a Gallery On the Moon" (Chant Records) features the artist on a plethora of instruments; the list reads bowed cymbals, buddha machine, ghatam, gong, kanjira, key chimes, manjira, mridang, opera cymbal, paper, ride cymbals, river rocks, slit drum, tabla, thunder sheet, and electronics.  No traditional drum set to be found or heard. That said, the album is a delightful sound adventure; there are moments that are inventive in the way that books for young children (ages 2-6) can be; in other words, Adler is continually playing with sounds and combinations of instruments, asking the listener to use his/ her imagination to fill in the story. For example, is the use of the thunder sheet in "Flight" meant to symbolize the sounds a flock of geese hear on a late summer evening.  Are the sounds of the gong and ride cymbals on "Cym" inviting or threatening?  The tabla drums on "Relative(s)" create a trance-like rhythm that draws one closer.
"For a Gallery On the Moon" lasts just 0ver 31 minutes yet is a travelogue like few you have encountered this year (or, perhaps, other years).  There are moments that bring the music of Terry Riley to mind ("Ghost Box") while the backwards tones of "rahdarkahC" remind this listener of the experimental phase of The Beatle and Jimi Hendrix.  Make up your stories for this music because that's part of what Brian Shankar Adler wants you to do. The percussionist also wants to take you out of your hectic world, make you relax and think about anything but politics and pandemics.  Sounds like a good idea!
For more information, go to www.brianadler.com.  To hear more and purchase the album, go to https://brianshankaradler.bandcamp.com/album/for-a-gallery-on-the-moon.
Click here for the opening track "Young Blood"!
Posted by Richard B. Kamins at 8:52 PM