Composer, arranger, and multi-instrumentalist Kyle Saulnier created the Awakening Orchestra 15 years ago not only to play his original music (and some astute covers) but also to create conversations around the political situation in the United States and the world.  18-members strong, Saulnier has assembled an aggregation of veteran and young musicians from both the New York and Boston musical community, sprinkled in the occasional guest vocalists and a guest soloist––together, they make music that blends many genres to create a sound that soars, roars, cries, and sighs. 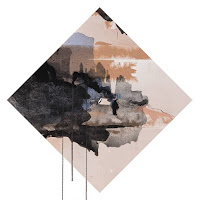 "volume II: to call her to a higher plain" (Biophilia Records) is the Orchestra's third recording ("vol. I: this is not the answer" in 2014 on Innova Recordings and "Interlude: Atticus Live–the Music of Jesse Lewis" in 2016)––the music was composed, workshopped, and performed over the past five years. Like all of the recent releases on Biophilia, the 15-song, 116+ minute program has an artistic, origami-foldout cover and is available only as a digital download.

The album is broken into two parts;  "Part 1: the pessimist's folly" includes "prelude & fanfare: the Patriot", an adaption of Nine Inch Nails "burn", an orchestral arrangement of Bill Frisell's "Throughout", and the four-part "i can see my country from here (Symphony No. 2 for the Awakening Orchestra"). "Part II: the optimist's folly" includes an orchestra adaptation of Molly Drake's "I remember", the five part title track which carries the subtitle "Concerto for Violin and Awakening Orchestra", the two part "the (desc/diss)ent", and closes with an instrumental adaptation of Eric Whitacre's chorale "lux arumque".

When faced with this much content, it's better to dive right in and start from track one. Sit and listen: this music changes moods often so after the "prelude & fanfare" prepare you for a big band experience, the first sounds you hear on "burn" is Michael McAliister's electric guitar. After his intro, vocalist Nathan Hetherington leads the way––there's a break in the middle where various instrumental vices from the Orchestra play before the intensity ratchets up for a powerful guitar. After a handsome reading of Frisell's piece, "Throughout", featuring excellent solos from bassist Joshua Paris, trombonist Michael Fahie, and trumpeter Seneca Black, the listener enters the musical world of "Symphony No. 2..."

The two long multi-section pieces (one is 41+ minutes, the other 33+ minutes) are quite involved, episodic; the "Symphony.." based on the comparison of the ideas of the French Revolution and how the United States democratic republic seems to have abandoned its ideals in the 21st Century and "Concerto..." is a work based on the 1980 book by Alvin Toffler "The Third Wave" and, the piece like the album, takes its name from a quote from Senator George McGovern.  For the latter piece, the composer wrote the violin parts for his wife Brooke Quiggins Saulnier––the blend of her playing, classically and folk music inspired, with the ensemble adds more shades to the music. Note her work with soloists Samuel Ryder (soprano), John Yao (trombone), Pablo Masis (trumpet), and Vito Chiavuzzo (alto saxophone)––sometimes. the violin is a color in the background, it's counterpoint during a solo, she sets up the solos. Ms. Saulnier is the primary voice on the "Cadenzas" that come after the first and third parts of the "Concerto..."

I't's hard to not attempt to describe each piece of music on this album as each song stands out for its melody, for its emotion, its interplay, the fie solos, and the arrangements. Still, after the tour-de-force of the "Concerto...", the final two tracks should not be missed.  "the (desc/diss)ent" features splendid work from the rhythm section, intelligent section writing plus powerful solos by Nadje Noordhuis (trumpet)––kudos to drummer Will Clark for keeping up his part of the conversation during the solo––followed by a give-and-take with Remy Le Boeuf (soprano sax) and Felipe Salles (tenor sax), also with Clark as a partner. Just past the halfway make of the 13-minute, Ms. Noordhuis steps out for an unaccompanied minute before Michael Caterisano (vibraphone) ushers her back in and slowly, the ensemble reenters.  The soulful trumpet solo takes the song to its close with just high trumpet notes over subdued electric piano.

"volume II: to call her to a higher plain" closes with the Whitacre chorale.  Arranged for the eight brass players, the lovely sounds echo as the melody rises, a spiritual finish to a spirited program.  Kyle Saulnier wants the listener to understand the gravity of the political and social issues that plague the United States but he refuses to lose hope.  There are moments throughout the album where the music asks questions and others where the music and the Awakening Orchestra seems to hold our hands, saying "be strong."


(Reader, take note––I have known Mr. Saulnier for around six-seven years as we were both teaching at Quinnipiac University in Hamden CT. He's spoken to my classes about contemporary music and we have talked about his writing process and the issues one has trying to get his/her music heard. He's since moved on but we stay in touch. Our discussions barely scratched the surface of how hard he has worked to get this music performed and recorded.  Kudos to Biophilia Records and to Nick Lloyd plus Greg DiCrosta for their efforts in bringing this project to fruition.)

Tenor and soprano saxophonist and composer Marius Neset, a native of Bergen, Norway, has been living in Copenhagen, Denmark, since he began his collegiate career there in 2003. While in school, he met numerous artists and performers, including British keyboard master Django Bates who featured him in his student band at the Rhythmic Music Conservatory.  Upon graduation, Neset began playing in various ensembles (including one with Professor Bates) throughout Europe including several that he lead or co-led.  His debut as a leader, "Suite for Seven Mountains", was issued in 2008 on Edition Records––the saxophonist went on to record several more albums for the British label before signing with the German ACT Music label in 2014, recording his debut album  for them , "Lion" with the Trondheim Jazz Orchestra. 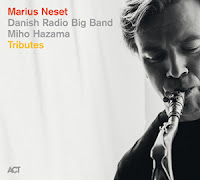 In 2019, Neset decided to move back "home" to Norway but, before leaving, he created a program to record with the Danish Radio Big Band with its newly-appointed chief conductor Miho Hazama.  "Tributes", his sixth album as a leader for ACT, features five new original compositions, one ("Bicycle Town") in two parts and another ("Children's Day") in three parts.  The program opens with "Bicycle Town", Neset introducing the song with a circular line that suggests Sonny Rollins without imitating the great master. He goes it alone for several minutes, expanding the melody and his sound until the reeds of the Big Band begins to flutter around him. The playful flutes and the bouncing baritone sax are soon joined by the low brass and eventually the rest of the band.  The music now has a funky feel suggesting Weather Report, especially Joe Zawinul's more rhythmic songs.


The tune comes to a quick close leaving Neset playing a spiraling line to the close. "...Part 2" is introduced with a new circular line before electric bassist Kaspar Valdsholt digs into his solo.  When the entire band joins, they play a familiar line from "...Part 1" and Neset produces a powerful solo. "Tribute" follows and is a classically-inspired work with a lovely melody––soprano saxophonist Hans Ulrik steps out of the ensemble for a sweet solo.  In fact, his voice dominates the middle of the song before Neset's arrangement for the reeds and brass creates a delightful dance. 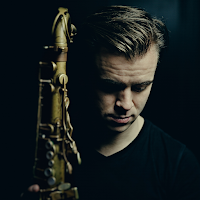 The two pieces in the middle of the program, "Farewell" and "Leaving the Dock", would not sound out of place on a Maria Schneider album.  The former starts with a lovely melody for the soprano sax (Neset, this time) supported by the brass, reeds, and piano. The music gently ripples forward as the soprano rises over the ensemble: in this instance, Neset sounds like Wayne Shorter, especially in his most fluid phrasing.  The slow fade leads directly into the next song. One can feel the waves lapping the side of the boat as trumpeter Mads la Cour introduces the melody with the leader and various other reeds shadowing his line. Pianist Henrik Gunde steps out for a thoughtful and poetic solo with the band sitting out for the first few choruses and then offering occasional support. The close of the piece suggests the boat, now on the open sea, looking homeward. 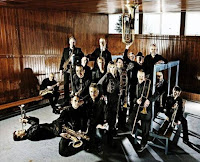 The album closes with the three-part "Children's Day". After its formal opening, "...Part 1" is a delightful and playful piece that suggests the Caribbean with a rollicking solo section for guitarist Per Gade and Neset. The somber theme also opens "...Part 2"––this time, the piece is a ballad with solos by Valdsholt (acoustic bass) and an excellent spotlight for trumpeter Gerard Presencer that covers a lot of time and ideas.  No formality or somber feel as "...Part 3" rides in on hand percussion and thumping bass. Neset dances through his sweet solo with the sections jumping in from time to time. The tenor sax leaps in and out of the sections short phrases before moving into the next part of his solo. The rhythms and the solo are irrepressible and irresistible pushing the band to a rousing climax.

"Tributes" certainly does not sound like a sad goodbye to Denmark for Marius Neset.  He celebrates his growth as a person and musician, hails his friendships, refers to his musical partnerships, shows how his twin influences of jazz and classical are easily intertwined in this 50-minute program.  A big bow to the work of the Danish Radio Big Band and conductor Miho Hazama (herself an excellent composer-arranger). Music can be and should be a joy to listen to: this recording certainly is!

For more information, go to www.mariusneset.info.


Here's Marius Neset and the DR Big Band in concert with a song that's not on the album: