Three by Three for February 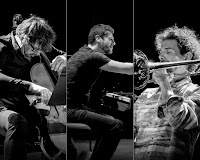 Pianist Frank Woeste and trombonist Ryan Keberle first met in 2015 while playing with trumpeter Dave Douglas.  The pianist, born in Germany now based in Paris, France, and the trombonist, born in Spokane, WA, now based in New York City, decided to create a project –  which they named Reverso – that blended 20th Century music with jazz because they felt that certain elements of the two "genres" have influenced composers and performers right up to the present.  They recruited French cellist Vincent Courtois and drummer percussionist Jeff Ballard to work with them.  Composer Maurice Ravel (1875-1937) served as the influence for the group's 2018 debut album "Suite Ravel" using his six-part "Le Tombeau de Couperin" as a stepping-off point for both revising the piece for four voiced and creating compositions of their own influenced by the great master. 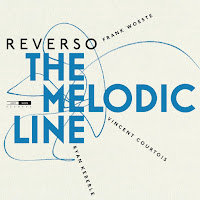 2020 brings Reverso's second album "The Melodic Line."  Released on the leaders's Out Note Records (released through Outhere Music), the ensemble has been pared down to a trio with the subtraction of Ballard. Instead of focussing on one composer, this time the music bears the influence of Les Six, six French composers –  Darius Milhaud, Francis Poulenc, Arthur Honegger, Georges Auric, Louis Durey, and Germaine Tailleferre – all of whom were active in the first decades of the 20th Century.  Woeste studied the music of Milhaud, finding influences as varied as American jazz and Brazilian music.  Meanwhile, Keberle spent his time exploring the music of Ms. Tailleferre (1892-1983). Even though she lived a long life, her most successful period of writing was between the two World Wars.

The nine-song program kicks off with Woeste's "Blue Feather", a handsome melody pushed along by the composer's piano and the deep tones Courtois's cello. The piece tunes percussive with clapping supporting the piano solo until the cello br=egins counterpoint and the trombone plays a melodic accompaniment.  Keberle's "Exemplar" is next; again, it's deep tones of the cello in the introduction that first catch your ear. Then, the trombone and cello share the melody over the spare piano accompaniment.  Courtois's lovey solo with piano accompaniment and counterpoint stands out. The trombone solo rises over the melodic piano and pizzicato cello, feeling like the aural equivalent of clouds cutting across the blue daytime sky.

This music is often quite lovely, a fascinating blend of classical, jazz, and folk melodies.  There's a funky feel to Woeste's "Absinthe" (especially in the piano's left hand in tandem with the plucked cello while Keberle's "Major Jack" has an anthemic intro that opens up to a long melody line before a sparkling piano solo.  The album closes with the pianist's lovely "Clara", yet another example of how the various voices work together to not only support the rich melody but to create a sonic flow under the pizzicato cello solo.

Reverso creates music that pushes, albeit gently, at barriers, eschewing genre, creating memorable melodies in an atmosphere of creativity and trust.  The album title – "The Melodic Line" – does give one a good idea of what you're in for.  Ryan Keberle and Frank Woeste, along with the quite impressive Vincent Courtois, make music that will excite and soothe your soul.  Give a long listen! 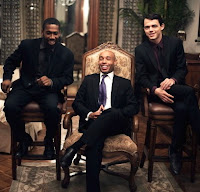 Pianist and composer Aaron Diehl still seems like he's the "new guy at the keyboard" but he's been playing professionally for, at least, 15 years.  He's worked with a slew of artists, ranging from Wynton Marsalis to Wycliffe Gordon to the New York Philharmonic and the Cleveland Orchestra.  His most high-profile gig is with vocalist Cecile McLorin Salvant.  Listening to Diehl is such a treat; he loves melodies, is an excellent improviser, and has absorbed myriad influences into his own articulate statements.  There are certain reviewers and critics who tend to lump him into the musical "Neo-cons" but, truly, he's his own man.  In a trio setting, one hears traces of Bill Evans, Ahmad Jamal, Herbie Hancock, and even a touch of Memphis Slim in his blues playing; plus, his touch is impeccable. 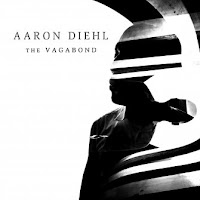 "The Vagabond" is Diehl's third release for Mack Avenue Records and features his current trio of Paul Sikivie (bass) and Gregory Hutchinson (drums - the picture above features the Trio's former drummer, the late Lawrence Leathers). The program features 11 tracks with seven originals from the leader plus pieces by Sir Roland Hanna, John Lewis, Sergei Prokofiev, and Philip Glass (interesting that those four pieces are the final tracks on the album).  One should notice how quiet many of these pieces are – Diehl and his rhythm section do not need to "shout" to get their musical points across and that allows the listener to really pay attention.  Note the power and classical influences on "Park Slope" as well as the strong bass solo and excellent drum work.  The subtle power of "Lamia" is its quiet yet insistent rhythm and Diehl's superb piano melody and solo.  The whisper-touch of Hutchinson's cymbal work and Sikivie's simple yet powerful bass work allows the leader to range far afield without losing touch with the thematic material.

This music really captures one's attention. The title track opens with a melody line that seems to keep rising along with impressive counterpoint from the bassist.  Notice how Hutchinson plays beneath the piano solo, toying with the time and accents yet never tripping up his musical partners.  There's also a strong classical feel to the lovely ballad "Treasures Past."  Diehl opens his solo with such a soft touch and, while he does play a bit harder at times, the real power in the piece is how melodic the trio is.

"Prokofiev's March" is the first of the last four tracks. It's a dazzling display of powerful rhythms, martial-sounding piano chords, and intense forward motion. Sir Roland Hanna's "A Story Told, Seldom Heard" is a lovely ballad with a rich chordal melody and one more impressive bass solo.  The unaccompanied piano opening of Lewis's "Milano" leads into a light-hearted, even a bit sentimental, ballad with more gentle cymbal colors and a touching piano solo.  The album closes with Glass's "Piano Etude No. 16" in which the rhythm section gets to work with creating solos while Diehl moves the music forward.  The power of his chordal work near the end of the piece plus its repetitive nature becomes hypnotic over the course of eight-plus minutes.

"The Vagabond" is an often stunning and soothing 65 minutes of music from Aaron Diehl, made all the more powerful and interesting by the work of bassist Paul Sikivie and drummer/ cymbalist Gregory Hutchinson. Even though each member of the Trio is a master of his instrument, this music is rarely about technique and always about the emotional richness of the compositions and the performances.  Take the time to absorb these sounds – it's worth the adventure!

For more information, go to www.aarondiehl.com.

Saxophonist Dayna Stephens (he plays soprano, tenor, and baritone) has been on the creative music scene for the past decade recording eight albums as a leader plus appearing on dates with trumpeter Brian Lynch, guitarist Perry Smith, pianist Theo Hill, and bassist Linda May Han Oh (plus others). Over his career he's also played alongside Fred Hersch, Muhal Richard Abrams, Roy Hargrove, Ambrose Akinmusire, Wayne Shorter, Rufus Reid, John Scofield, Lionel Loueke, and Gretchen Parlato.  He's been much more active since a kidney transplant in 2015 saved his life. After recording for Criss Cross Records and Sunnyside Records, Stephens started his own label in 2017 – Contagious Music – where he released "Gratitude", a quartet date with Brad Melhdau, Julian Late, Larry Grenadier, and Eric Harland.  His saxophone influences are many and varied; he's also an accomplished bass player but has yet to record on the instrument. 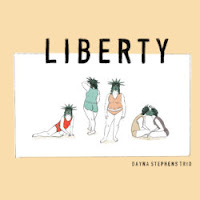 His new album, "Liberty" (Contagious Music), is his first trio date.  Featuring Harland and bassist Ben Street, the 11 song program (10 originals plus "Planting Flowers" from Aaron Parks) is filled with intelligent playing, intuitive interactions, fine solos, and Stephens playing with such confidence and joy.  "Liberty" can have several meanings; in this setting, especially without a chordal instrument plus the saxophonist is also talking about creating art in a society that is "free" but those freedoms are under fire from may sides.  Can Stephens's music help by reminding listeners that we music work together to produce positive results, that we each have a say in the world we want to live in but must be cognizant of the needs of others.  No matter what you think the word means, the album "Liberty" is a delight from start to finish.

The album, recorded at the Rudy Van Gelder Studios in Englewood Cliffs, New Jersey, has such an immediate sound as if the trio was in the room with you.  There's an undercurrent of blues that runs through pieces such as the opener "Ran" and the closer "Wil's Way" (dedicated to organist Wil Blades).  Street and Harland set the tone by swinging with a purpose, giving Stephens a delightful cushion of sound to bolster his attack. In his notes, the saxophonist writes that "Faith Leap" is inspired and influenced by John Coltrane's "Giant Steps"  – even more inspiring for Stephens is Harland's funky attack and Street's melodic bass lines.  The leader turns to baritone saxophone for "The Lost and Found", a handsome ballad that is emotionally strong and shows the leader's impressive range on the big horn. He recorded the song on the tenor sax for his 2007 debut "The Timeless Now", a sextet date that also featured this rhythm section.

Give a listen to "Loosy Goosy" down below and you'll hear the closest connection to the classic Sonny Rollins Trio recordings of the 1957-1958. Stephens is now imitating the great tenor innovator but displays a similar confidence and big sound as the elder did on the recordings.  Don't miss the African-influenced "Tarifa" – the city for which the song is named sits at the southernmost end of the Iberian Peninsula, just eight miles from Morocco.  Harland's splendid drumming along with Street's foundational bass lines and Stephen's overdubbed saxophones makes this track irresistible.

"Liberty" sounds great, with musical interactions that will not only keep your attention but also make you move your feet and nod your head.  Dayna Stephens, along with Ben Street and Eric Harland, has made one of the most memorable albums of the past several years, brimming with ideas, melodies, and rhythms, exuding confidence and pleasure. Dig in – dig it!

For more information, go to daynastephens.net. The album will be released on 2/28/2020.

Here's the afore-mentioned "Loosy Goosy" in the studio: