History, Their Stories, Our Stories

Here are two more recordings that remind listeners music reflects the society we live in; the messages in these songs, whether overt or subtle, speak to all of us.

Bassist, composer, host of NPR's "Jazz Night in America" and "The Lowdown" on Sirius XM, and so much more, Christian McBride is a musician who makes his presence known.  His list of sideman credits grows longer every month plus he leads a trio, a quartet (New Jahn), a quintet (Inside Straight), and an 18-member big band.  A native of Philadelphia, PA, he is a master of both the acoustic and electric basses.  In 1998, McBride was commissioned by the Portland Maine Historical Society as well as the National Endowment for the Arts to compose "The Movement, Revisited", an episodic work that speaks about the Civil Rights Movement through the words of Rosa Parks, Reverend Dr. Martin Luther King, Jr., Malcolm X, and Muhammad Ali. He toured the Northeasten United States with his quartet and a 30-member choir. In 2008, McBride revised the work, adding a section in honor of the election of President Barack Obama and scoring the piece for his Big Band. 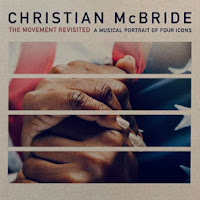 McBride did not go into the studio until September of 2013 to record "The Movement, Revisited" and, thanks to Mack Avenue Records, the album is finally being released.  Not sure why it's taken so long but now that the music is in wide release, make sure you listen.  Chances are most people know the stories of these four heroes of the Movement yet, in this time of renewed racist activities, the growth of anti-Semitism, and fear of immigrants, the words one hears have renewed meaning.  Among the highlights are the performances of all the "speakers", especially poet Sonia Sanchez and actor Wendell Pierce.  The former brings great verve to her presentation of Ms. Park's words, tremendous rhythm and passion while the latter's sonorous tones may not match the "preacher's tones" of Dr. King, he brings a gravitas to the words that remind us of all the work that needs to be begun and carried.

Other voices stand out. Alicia Olatuja's impassioned vocal, supported by the Voices of The Flame choir, on "Brother Malcolm" elicits chills. Pay attention to the fine support from pianist Geoff Keezer, drummer Terreon Gully, and Ron Blake's equally passionate tenor sax solo. Warren Wolf's vibraphone and Steve Wilson's soprano saxophone solos on "Sister Rosa" ring out as do the voices of the choir.  "Rumble In The Jungle" is a funky romp for the big band and choir – powered by Gully's thunderous drums, Carl Miraghi's foundational baritone sax locks in with McBride's bass to push the message across while the Choir celebrates the audacity that permeated the personality of Muhammad Ali.

The album closes with "Apotheosis", a celebration of the election of Barack Obama in 2008. Instead of serving as the culmination of the Civil Rights Movement (which it did for many people), his rise to the most powerful office in the United States began a another campaign, one that attempted to discredit the unity that Barack Obama spoke about in his Election Night message.  The four "narrators" (including Dion Graham and Vondie Curtis-Hall) take turns reading the powerful words – the accompanying music, especially the lovely soprano saxophone of Steve Wilson, is quite lovely and begins to intensify as the narrators intone "Yes We Can!"  The music rises to a glorious climax with the choir repeating "Free at last" while the band grooves beneath them, culminating in an equally glorious "Amen."

The positivity that permeates "The Movement, Revisited" seems nostalgic in the light of the present administration's work to dismantle not only FDR's New Deal but the policies that President Barack Obama worked so hard to put place on the environment, voting rights, equal rights, and more. Yet, Christian McBride's music and presentations reminds us of the power that comes from unity, working from the ground up in our communities to make our communities thrive and prejudices again melt into the background.

For more information, go to www.christianmcbride.com.

I cannot speak for other reviewers but I read a lot of my colleagues writings.  Especially impressive are those writers who are also excellent musicians as they often can get to the heart of the music and how the musicians put the pieces together.  Peter Hum, who is celebrating 20 years as a music and food reviewer for the Ottawa Citizen, is one of those fine writers who, when he puts his pen and sits down at the piano, makes intriguing music that is both inside and outside the "tradition". 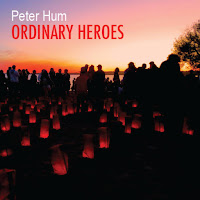 For his third release (his first was issued in 2010, the second in 2015), Hum is in the company of most of the people on the other recordings – they include Kenji Omae (tenor saxophone), Mike Rud (guitar), Ted Warren (drums) plus Alec Walkington (bass on six tracks), and Dave Watts (bass on four tracks).  Brooklyn, NY-based Dave Smith (trumpet) is the "new" member of the group replacing Nathan Cepelinski (alto and soprano saxophones).  Hum, the composer, is on a mission and wants his music to reflect the changes in society over the past four years, i.e., the shift to nationalism, the closing of borders, disrespect for natural resources, and more.  Yet, like some of the best of Charles Mingus's more pointed compositions, the music is neither strident or atonal.  Notice when the band marches into "Rabble Rouser", led by Warren's martial drumming and Smith's trumpet parading on the top – the music has a powerful forward motion, fine supportive bass work (Walkington), and a positive feel. Just check out the groove the rhythm section falls into to usher in Omae's excellent tenor solo.

Check out "Fake News Blues"; opening in a Jazz Messengers groove, the melody unfolds gradually thanks to the guitar, tenor sax, and trumpet.  Rud's solo starts out understated but really digs in and raises the intensity. Omae follows – he displays a hard-edged tone without being shrill and this solo gets pushed forward by Warren's excellent drums. Bassist Walkinton and Warren share "fours" before the sextet returns to the theme.  No half-truths here (the blues is always honest).

There are delights scattered throughout the program.  "Tears For the Innocent" was composed after six Muslim worshippers were shot to death in Quebec City in early 2017.  Strong solos from bassist Watts, Rud, and the composer highlight this powerful piece. "Safe Passage" is inspired by refugees fleeing oppression with the hope that they find asylum. The music, to these ears, has the feel of late 60s Herbie Hancock. Strong solos from Hum, Omae, and especially Smith play out over the active rhythm section.  The ballad, "Embers", is a prayer that the"flames of progress" catch fire once again. The handsome melody is introduced by the guitar followed by a compelling statement from Smith. The "octaves" solo (in the stye of Wes Montgomery fthat Rud plays before the return too the theme truly catches the ears.

"Ordinary Heroes" closes on the title track. Inspired by a quote from actor/ activist George Takei, the song reminds the listener that he, she, they, and all of us have the power within us to make the world a better place, to bring about positive change.  The gospel and r'n'b feel in the rhythm section is echoed by the stunning guitar solo and heightened by the tenor solo.

Over the course of 73 minutes, Peter Hum and his fine ensemble create a world of possibilities, built on hope and the desire to make positive changes in this time of negativity. The composer and pianist knows there are people all over the world taking similar steps, tuning out the negativity from the majority of politicians and paying closer attention to  their own neighborhoods, towns, cities, and countries.  Music has more power than we think and can be used for good. "Ordinary Heroes" reminds us of the that all the way through.

Leave it to a journalist to write a piece titled "Fake News Blues":