Guitars in Many Modes & Moods

Guitarist and composer Rez Abbasi, born in Pakistan and raised in Southern California, has been entrancing audiences the world over for nearly three decades with his blend of creative music from his native region as well as his adopted homeland.  The results of his studies and experimentation is well-documented as he has released 14 albums as a leader or co-leader plus has appeared on many more.

In late 2019, Abbasi released two new albums, one a session co-led with French harpist Isabelle Olivier and the other a new soundtrack for a classic Indian silent film from 1929.  Both albums are connected in their use of Eastern and Western instruments plus the multi-rhythmic diversity of the musicians. 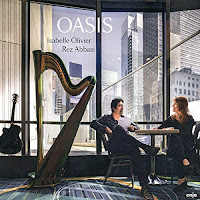 Olivier Abbasi Sound in Sound, otherwise known as Oasis, features the harpist and guitarist in the studio with Prabhu Edouard (tabla, kanjira) and David Paycha (drums).  The quartet's self-titled debut album (released on ENJA/ Yellowbird) covers a wide swath of musical territory with the program of six originals by the harpist, three by the guitarist, and a fascinating arrangement of of Richard Rodgers's "My Favorite Things." That last piece leads off the album and sets the tone; after a powerful opening, the quartet opens up over the raucous percussion and both Abbasi and Ms. Olivier pushing and prodding each other (shades of the classic John Coltrane version).  The harpist's attack reminds me of the way McCoy Tyner played in the 1970s and beyond.

On the first few listens, the music often has the sound of the cooperative quartet Oregon, especially in the interactions of guitar and tablas. Abbasi's guitar provides both melody and rhythm while the tablas and trap drums bubble underneath. That's apparent on the guitarist's "Lemongrass" and on the harpist's "Road Movie."  The former is quite melodic with sparkling guitar while the latter builds off the fire created by Edouard's blazing tablas.  Ms. Olivier's "Dodeca" is an impressionistic musical painting opening with a guitar and harp statement that also features subtle electronics.  The percussion is understated, the acoustic guitar and harp weave in and around each other never getting on the way.

Beauty abounds on "Cherry Blossom"and never wavers from the opening guitar harmonics and percussion to the gentle melody Ms. Olivier composed and plays. Images of a Japanese garden merge with the soft drums and frame drum (kanjira). While the piece does pick up in intensity, the melody and improvisations create a hypnotic effect.  Ms. Olivier's "Timeline" follows – it moves steadily forward on the percussive flow but note the harpist's use of tape delay and electronics that lead into a powerful electric guitar solo.

"Oasis" lives up to its name as it provides a wellspring of ideas and musical adventures. One hopes that this is just the first of numerous projects and concerts from Isabelle Olivier and Rez Abbasi, that they continue to blend the myriad influences that each bring to the collaboration.

Here's a short video to introduce you to the music and the musicians: 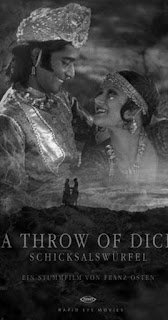 Rez Abbasi was approached in 2017 to create a new soundtrack for the classic Indian silent film "A Throw of Dice" - it's the third in a trilogy of movies created by German director Franz Osten (1876-1956) and is based on the Sanskrit classic "The Mahābhārata". Osten, enticed to India in 1924 by Himansu Rai, a European-educated businessman with a love of motion pictures. They made a series of silent films and then were in the forefront of "talkies" creating over three dozen movies in the 1930s to sate a growing audience.  Osten returned to Germany as World War II began to rage across Europe; he never made another film but is still famous in India as one of the forefathers of "Bollywood".

For this project, Abbasi created a new quintet – The Silent Ensemble – that is composed of Pawan Benjamin (tenor and soprano saxophones
bansuri and western flutes ), Jennifer Vincent (acoustic bass, cello),
Rohan Khrishnamurthy (mridangam, ghatam, khanjira), and Jake Goldbas (drum set) with the leader on acoustic and electric guitars plus electric sitar-guitar).   The group members bring a wealth of experience to this music.  Benjamin has worked with Roscoe Mitchell, bassist Reggie Workman, and choreographer Bill T. Jones while Khrishnamurthy has worked with the Ragmala Dance Company and toured with trumpeter Amir ElSaffar.  Miss Vincent has worked with Betty Carter, Abbey Lincoln, the Duke Ellington Orchestra, and Jazz at Lincoln Center while Goldbas has also worked with Bill T. Jones, Aretha Franklin, in Broadway pit orchestras for "The Color Purple" and "Dear Evan Hansen" plus is featured in composer-arranger Miho Hazama's large ensemble. 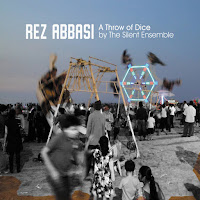 Because the music is written for a silent film, the results are fundamentally different than they would be for a "talkie." Abbasi takes his cues from the images, the actions of the characters, and the emotions he can see on the screen, thereby making the music "impressionistic" from the start. In interviews, the composer states that 30% of the music is improvised thereby making each performance unique.  In fact, the soundtrack album (issued by Whirlwind Recordings) features a bit over 80% of the music composed for the film (go to the guitarist's website to watch the movie and hear all the music). That stated, the album stands out on its own merits. First and foremost, the music covers a lot of territory, from traditional to contemporary, from acoustic to electric and all combinations.  Since  the ensemble are all multi-instrumentalists (save for Goldbas), Abbasi is writing to so many sonic possibilities.

Opening with "Mystery Rising", the gentle melody rises out of the acoustic guitar and Benjamin's bansuri flute pushed forward by the Indian drums and trap set.  Ms. Vincent's cello is used for both melody and counterpoint as well as rhythm. There's a "other-worldly" feel to the electric sitar opening of "Facing Truth"; dancing atop the insistent bass notes, Abbasi paints a picture that the tenor sax and percussion help to fill out.  One hears a gentle ballad with a "rock" twist on "Blissful Moments" and a folkish twist of cello and acoustic guitar over the harder-edge drums on "Duplicity".  "Moving Forward" starts as if the piece was going to hit hard but steps back for a bass solo while "Changing Worlds" uses a touch of dissonance in the guitar, a long flute and cello melody line, plus a blazing tenor sax solo to makes its point.

The best ways to listen to "A Throw of Dice" is to watch the movie from start to finish or sit down and listen to the recording all the way through.  Rez Abbasi has created quite a set of musical images that work with or without the film because the music is so intelligent and The Silent Ensemble so gifted.  It's quite a journey, one well worth taking!

For more information, go to rezabbasi.bandcamp.com/album/a-throw-of-dice. 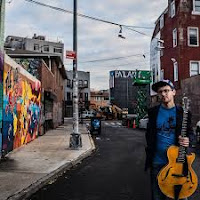 Guitarist and composer Alex Goodman, a native of Canada now residing in New York City, is a busy musician. His collegiate studies began in Canada at McGill University and the University of Toronto and culminated in a Master's Degree in Jazz Performance at The Manhattan School of Music. Not only does he leads his own ensembles but also is an active sideman appearing and recording with artists such as Roxy Coss, drummer-composer Mareike Weining, saxophonist Remy Le Boeuf, violinist Tomoko Omura, and Manuel Valera.  He's issued five albums as a leader plus one delightful solo album "Etudes." His music easily moves through classical influences as well as jazz and his sound is often clean with thoughtful solos and excellent background work 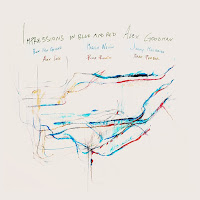 "Impressions in Blue and Red" (Outside In Music) is a 2-CD set built upon the artist's understanding that both music and understanding of color can, in his words, "..evokes a response that is processed with language." Goodman does not imply that he's a synesthete ( someone for whom sound waves create colors) but that his music in inspired by the colors certain painters use.  For this collection of originals and other works, the guitarist assembled two different quartets.  The "Blue" group includes Ben Van Gelder (alto saxophone), Martin Nevin (bass), and Jimmy Macbride (drums) while the "Red" features Alex LoRe (alto saxophone), Rick Rosato (bass), and Mark Ferber (drums).  On both CDs, each musician gets a short solo improvisation that introduces a Goodman composition and both disks close with a standard ("I'll Never Be The Same" and "If I Loved You") played solo by the guitarist.

On initial listening, one cannot detect much difference between the "Blue" album and the "Red". Some pieces swing, several have a classical feel, and none are too long. It certainly feels as if Goodman played with both groups before recording them. There are seven originals and three solo improvs on the first and eight originals plus three solo improvs on the second but "Red" also includes three pieces from other composers (including the standard at the end). Herbie Hancock's "Toys" swings gently and features a delightful bass solo (Rosato), no alto saxophone, plus delightful drumming from Ferber. Goodman's introduction to Johann Rosenmuller's "Sonata No. 12 Adagio" reminds one of the guitarist's classical leanings while the arrangement of the quartet's interpretation of the original piece brings out its Baroque qualities (the composer lived from 1619-1684) with excellent contributions from LoRe (such a singing quality to his alto sax) and strong support from the rhythm section.  There are pieces on both that blend classical and jazz. "Blue" has the delightful "Cobalt Blue" and the compelling "Still Life With Skull" (Macbride's percussion sparkles along with Nevin's powerful bass solos); meanwhile "Red" has the lovely medium tempo ballad "In Heaven Everything Is Fine."  There are also moments on the second disk where LoRe's alto sounds like an an oboe (to my ears on "Like a Fire That Consumes All Before It").

"Impressions in Red and Blue" contains an impressive amount of music and impressive musicianship.  Alex Goodman and his two quartets give the listener plenty to dig into or to let float through the room. There are moments when one hears a touch of the late John Abercrombie in his solos but, overall, this music sounds fresh and exciting.

For more information, go to www.alexgoodmanmusic.com.  Goodman, along with Alex LoRe, Mark Ferber, and Martin Nevin, will play a CD Release Show on March 8, 2020 at The Owl in Brooklyn NY – check out the guitarist's website for more details.

Here's the "Red" Quartet in the recording studio: