Trumpeter and educator John Bailey has been impressing audiences since his high school years in the mid-1980s.  He went on to play with such greats as Ray Charles, the Buddy Rich Orchestra, Woody Herman, Ray Barretto, and, most recently, with Arturo O'Farrill's Afro-Latin Jazz Orchestra and the Ed Palermo Big Band.  Before moving to New York City, Bailey taught at the First School School of Music/ University of Miami and Florida International University.  He now teaches private lessons. 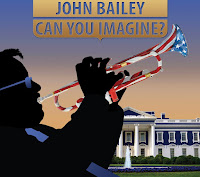 The album is built around the 12+ minute "President Gillespie Suite", a three-part Bailey composition inspired by trumpeter Dizzy Gillespie's 1964 run for the Presidency. What began as a fundraiser in 1963 for CORE (the Congress of Racial Equality) and other Civil Rights organization grew into a semi-serious attempt to raise people's awareness of the struggle for equal rights, not escalating the Vietnam War, and more. Gillespie reworked his classic "Salt Peanuts" to replace the title phrase with "Vote Dizzy!"  Bailey's piece celebrates the peaceful, improvisatory, nature of Gillesie's music, featuring excellent solos from McIntrye (trombone) and himself. Pay attention to the splendid work of the rhythm section and how each musician interacts and responds. Right after the trombonist 's fine solo, the front line breaks into a four-way conversation.  The third movement, "President Gillespie's Birthday Song", is based on the changes of the classic "I Can Dream, Can't I" takes off into a rapid-fire bebop rhythm with a sly wink from pianist Gomez to the "Salt Peanuts" riff and delightful solos from Dillard (tenor sax) and Bailey as well as "trading 8s" section with drummer Lewis. Don't miss the fine trumpet coda at the close. 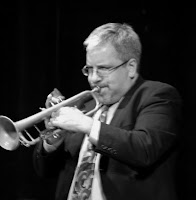 The suite is not the only reason to dig into the album.  Lewis's "The Touch of Her Vibe" is a splendid Latin influenced ballad which opens with hand drumming leading into a fine melody line. Note how Bailey (flugelhorn), Dillard (tenor), and trombonist Hunter share the melody  plus how Lewis ups the ante throughout the song by changing and mixing tempos, overdubbing tabla drums, and creating a sensuous flow.  O'Farrill's "Ballad From Pro, Incienso Y Mirra" is a stunning work – originally composed for a Christmas Eve concert that features Dizzy Gillespie and Machito, the lovely piece rises on the fine melody and solos from the leader (trumpet), Gomez (right in the melody, the rhythm section doubles the tempo), and more great drumming.  Ms. Axelrod's excellent bass and alto flute shines on Chico Buarque's "Valsa Rancho" with a shout out as well to Gomez's sympathetic piano accompaniment and Lewis's fine brush work.

"Can You Imagine?"  covers a lot of musical territory; the music is lively, heartfelt, sweet, sensual, swinging, with excellent contributions from every involved.  Not sure if John Bailey is hitting the campaign trail in this, arguably, most fractious of election year but his music and message deserves your attention.

For more information, go to https://johnbailey.com.

Trombonist Audrey Ochoa is a multi-talented musicians and songwriter who is comfortable in a multitude of settings including jazz, rock, punk, ska, Latin – you can tell by listening to her broad tone and selection of material that she has no fear.  She also has quite the sense of humor – her 2014 debut album, "Trombone and Other Delights", not only features songs such as "Zombie Apocalypse" and "Painting Rice in the Finland Woods" but also the cover is a tribute to Herb Alpert's "Whipped Cream & Other Delights" - see it here! Her 2017 followup, "Afterthought", is a trio date which also features contributions from electronica dj Battery Poacher. 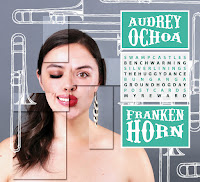 Album #3 is "Frankenhorn" (Chronograph Records) and it's certainly moving in new directions.  While bassist Mike Lent, who appeared on Ms. Ochoa's first two CDs, is here as is pianist/keyboards player Chris Andrew (album #1) and drummer Sandro Dominelli (album #2) plus the return of Battery Poacher, the album also features contributions from a three-piece string section, two percussionists, and electric bassist Rubim de Toledo.  A gander at the album cover plus the album title give us the hint that this music is the result of many different ingredients and Ms. Ochoa's expansive imagination. The melodic string arrangement on the opening track, "Swamp Castles", gives the music a lift over the lively rhythm section. The trombone sound is creamy as it is on the following track, the handsome ballad "Bench Warning".  Here, the music bounces along atop percussionist Luis Tovar's congas and Andrews's melody yet percussive piano work.  The leader's solo is highly melodic and, again, the strings serve to frame her playing in a lighter mood.

Battery Poacher creates a "chill" mood for Ms. Ochoa and Andrews's synths on two tracks.  "Huggy Dance" not only utilizes drum machines but also the trombone is overdubbed to create a harmonic choir.  Poacher's other contributions can be heard on "Groundhog Day" – the blend of acoustic instruments (trombone, piano, and conga) with the droning synths create a handsome soundtrack.  Again, the overdubbed trombones play harmony but also serve as a choir.

Two other tracks stand out. The hard-edged "Silver Linings", a trio cut with Lent and Dominelli, is quite powerful with a trombone  solo that "rocks" pretty hard.  The closing track, "My Reward", also has a harder edge this time with a deep bluesy feel.  Just bass and trombone, the "conversational" quality of Ms. Ochoa's attack and the deep sound tha Lent produces, is a treat – listen below.

"Frankenhorn" is fun music; Audrey Ochoa is a serious musician who does not take herself too seriously.  Yet, the album does not descend into mere frivolities.  At 40 minutes, one can sit down and listen to the entire program. And you should  – there's lots to absorb!

For more information, go to audreyochoa.com.

The Westerlies is a brass quartet (two trumpets, two trombones) that came together in 2011 in Seattle, WA.  All four members are from the Pacific Northwest including new trumpeter Chloe Raymond (who replaced co-founder Zubin Hensler in 2018) while trumpeter Riley Mulherkar, trombonists Andy Clausen, and Willem de Koch fill out the ensemble. The group's repertoire covers a wide swath of musical territory and it's mission is education and community engagement plus reaching out to as many young musicians as possible.  Their first album, "Wish The Children Would Come On Home", was dedicated to the music of pianist Wayne Horvitz and was issued in 2014.  They followed that two years later with a self-titled recording that featured pieces by each member plus composers Sam Amidon, Charles Ives, and Duke Ellington. 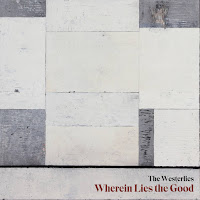 "Wherein Lies The Good" (The Westerlies Music) reunites the band with producer Jesse Lewis (he produced the 2016 recording and their 2018 video recordings) –   each member contributed, at least, one original composition, plus there are pieces by Robin Holcomb (the title track), folk singer Judee Sill, the 19th Century harpist John G. McCurry, experimental cellist Arthur Russell, a playful piece from Charles Ives as well as a traditional American tune adapted by that composer, and a medley of Gospel pieces from the repertoire of the Golden Gate Quartet.  With the exception of Ms. Holcomb's 14+ minute piece and the three-part, 10+ minute "Entropy" (by Mulkerhar), the songs are fairly short. 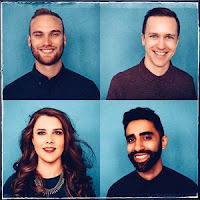 One's initial impression of this album is that the Quartet is deeply invested in "Americana" music. You hear that on the earlier albums but the inclusion of the often-rousing five selections associated with the Golden Gate Quartet plus Ives's delightful "Memories" illuminates the ensemble's funkier and more fun side.   The Gospel tunes have quite a groove with shouts and prayers mixed together, truly the bedrock of the blues.  Here there is a connection to the Deep South of the United States, to the hopes and dreams of African Americans. Sam Amidon's arrangement of McCurry's "Weeping Mary" (listen below) is an evocative hymn based on the composer's Shape Note style while Charles Ives's adaption of the traditional spiritual "Give Me Jesus" (retitled "In The Mornin'") is sweet and gentle.

Ms. Rowland's contribution is the lovely ballad "Laurie" dedicated to her teacher Laurie Frink who died in 2013.  Before her passing, her reputation as one of the finest teachers and practioners of the trumpet was legend.  Her presence graced numerous large ensembles including the Maria Schneider Orchestra.  De Koch's "From The Very First Time" was written with the experience of the ensemble's residency in Kenner, LA.  It's a subtle work, with emotional melody lines amid a handsome background.

Ms. Holcomb's piece is an episodic work that features several of her short, often melancholic, melodies tied together by intelligent harmonies, changes in tempo, and ringing long tones.  The sound of the recording reverberates at the end of each short section, giving the musicians and the listeners a short rest before moving on.

"Wherein Lies The Good" closes with Murkerhar's "Entropy", a piece that tells the story of a person dealing with the myriad changes to his/her world through his/her lifetime.  The opening fanfare is uplifting but, as the piece progresses, the changes (to the world) become too much, the music and the sound becomes harsher and the person succumbs.  The closing section, therefore, is an elegy, a remembrance, a prayer.

The Westerlies create a number of scenarios on "Wherein Lies The Good" and there are times that the program is dizzying in its scope.  Take your time, enjoy the more accessible tunes but remember to return for the pieces that need deeper listening.  If you have the opportunity, see the band in person; that written, sit quietly and listen for your soul will be moved!

For more information, go to www.westerliesmusic.com.

Here's a hymn from the album: