The quartet of Peter Erskine (drums), George Garzone (tenor saxophone), Alan Pasqua (piano), and Derek Oles (bass) set up shop at Sam First, a new Jazz club near LAX in Los Angeles, CA, for a three-night gig (January 17-19, 2019).  They played two sets each night, performing material ranging from originals to standards, repeating some of the pieces from set to set (but never repeating themselves), and generally thrilling an audience with high-powered and melodic straight-ahead jazz.  Since all four musicians are veterans of the music scene as well as friends, the resulting music is fresh and fun. 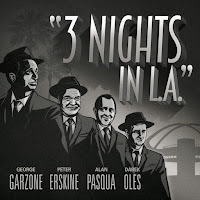 "3 Nights In L.A." (Fuzzy Music) is a document of the quartet's musical adventures.  The album comes in a three-disc set or as one big download. At nearly three-and-a-half hours, the best way to enjoy the music is one set at a time.  Garzone, who first came to critical notice as a member of The Fringe, the Boston, MA-based trio, that was adventurous in its approach to improvised music. He's also teaches at Berklee College and has been on the faculty of the New England Conservatory, Manhattan School of Music, and NYU (among others). It's quite a treat to hear him stretch out on these songs.  Bassist Oles, who was born in Poland and had a busy career from his teenage years on, moved to Los Angeles in 1988 to study with Charles Haden and, over the years, has not only become first call musician but a faculty member at the University of California/Irvine.  Pasqua is also a very busy musician with a list of credits that boggles the mind. For good reason – he can play in may different styles and "sound" like himself.  As for Erskine, he's been playing, teaching, and recording since joining the Stand Kenton Orchestra in 1972. By the end of that decade, he was in the drum chair of Weather Report. Erskine has appeared on over 700 albums and, like Pasqua, is on the faculty of the Thornton School of Music at USC. 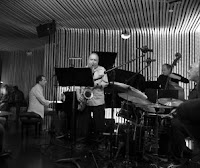 About the album, the best review is that you hear four master musicians having fun.  They swing, rock, squall (at times), dance, know how to caress a melody (Garzone's "To My Papa" is a splendid example as is Pasqua's "Agridolce"), and absolutely settle for the cliche.  Dig their version of John Coltrane's "Equinox"; the harp-like showers of notes from the piano, the bluesy beat of Oles and Erskine, and Garzone's powerful solo, all add up to an impressive piece of music.

"3 Nights In L.A." is an album to savor.  The lovely sound, the intelligent chair of material, and the fine musicianship, not at all surprising when you think of George Garzone, Peter Erskine, Alan Pasqua, & Derek Oles and their impressive body fo work.  Dig into this sumptuous recording – you'll enjoy the many directions the band takes and where the music ultimately goes.

For more information and to hear the opening track of Disk #1, go to petererskine.com/featured-album/3-nights-in-la/.

The recording's US release date is August 16 but the digital album was issued in mid-July.

Late last year (11/18), tenor saxophonist and composer Josephine Davies released her third album as a leader.  "In the Corners of Clouds" (Whirlwind Recordings) is the second recording of her trio, a group that features her regular bassist Dave Whitford and newest addition, drummer James Maddren.  Ms. Davies, a native of the Shetland Islands and now a resident of London, England, is a busy musician, working in several large ensemble and leading two other projects besides the Trio, now known as Satori after the group's 2017 Whirlwind album. 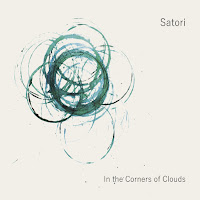 Ms. Davies has created a sound that shows off both her melodies as well as her penchant for getting everyone involved.  There are moments when the sound of this trio reminds me of alto saxophonist Bernie McGann's 2000 "Bundeena" – a touch of blues, of folk music, music that is a conversation between the participants and not just soloing over the rhythm section. There's also a touch of the classic John Coltrane Quartet, especially the less frenetic work that that group did in the studio up to "A Love Supreme."  "The Space Between Thoughts" is a soulful ballad with sparse bass work and whisper-soft brush work plus a melody "sung" by the saxophone.  Ms. Davies takes her time moving through the melody, with an easy transition into her solo. Whitford's fine bass solo is short and melodically rich.  The track is one of the two tracks under five minutes on the album but feels complete in its brevity.  The other "shorter" piece is the album closer "Scattered", notable for the saxophone-bass dialogue in the solo section.

The dancing twists-and-turns of "Wabi-Sabi", with its Arabic-sounding curlicues and powerful percussion, opens the album (hear below) and one is immediately caught up in the works this trio creates.  The title track has a tinge of Sonny Rollins's "Way Out West" in the percussion but it's Ms. Davies' melody that stands out.  Her subtle solo blends soft and harder tones, pushed forward by the active rhythm section.  She overdubs a second tenor saxophone to create harmony and counterpoint on "Lazy", a song that lopes along on the dancing bass lines and the "click-clack" of the drumsticks.

This review of "In the Corners of Clouds" may have been percolating in my consciousness for the past nine months mostly because the music does not shout (most of the time) or make bold statements.  Instead, the listener is seduced by the melodies, by the rich solos, by the saxophone tone that can be soft yet hard-edged when the music calls for it, and, finally, for the excellence of the rhythm section.  Josephine Davies – in her guise as the leader of Satori – makes music for the soul, illustrating the many directions the creative mind can go.

I look forward to hearing more music from Ms. Davies, including from her Big Band.  For more information, go to www.josephinedavies.co.uk.

Tenor saxophonist Rich Halley, born, raised, and still living in Portland, Oregon, is in the midst of a long and exciting career.  He attended the University of Chicago in the mid-1960s, coming in contact with various blues artists as well as the AACM.  He moved back home in 1968 and has played many types of music even as he he worked on his Masters Degree in Biology from the University of New Mexico.  Musically, he has played and/or recorded  with multi-reed player Vinny Golia, trumpeter Bobby Bradford, trombonist Michael Vlatkovich, trumpeter Rob Blakeslee, and bassist Michael Bisio (among others).  Over the past decade, he has led and continues to lead bands that feature his son Carson Halley on drums and bassist Clyde Reed (who has worked with the saxophonist since early in the new century). Since 2001, Halley has released his music on his own Pine Eagle Records label. 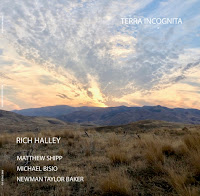 In August of 2018, the saxophonist was in the New York City area and recorded "Terra Incognita" (Pine Eagle) in Brooklyn with pianist Matthew Shipp, drummer Newman Taylor Baker, and the afore-mentioned Michael Bisio (a long-time friend).  While the quartet has never recorded together before or even had a rehearsal before entering the studio, Halley had performed with the bassist when Bisio lived in Seattle and also played in a trio with him and drummer Baker.  The album is quite apropos in the light of the information above because this music was an "unexplored territory" for the participants.  Yet, their fearless approach to the session results in a delight-filled recording.

Readers of this and many other blogs or magazines know how creative the trio of Shipp, Bisio, and Baker are in the studio and in person.  The drummer, in particular, has added quite a fascinating voice to that Trio and he is in fine "voice" on these six pieces.  Baker adds such fascinating colors and rhythmic patterns to this music – o, he can burn with passion, as he does on "Centripetal" but make sure to listen to his sparse cymbal work on "The Elms."  That track is a handsome ballad with lyrical piano and a falling melody line from the tenor.  "The Opening" (yes, the first track) hits on all cylinders from the get-go with its rumbling, skittish, bass lines, rampaging drums, two-handed piano counterpoint (every once in a while, Shipp resembles McCoy Tyner from the 1970s), and Halley's powerful, impassioned, solo (he rarely records with a pianist these days).  The playful "Forager" illustrates how these musicians listen and respond to each other.  Baker locks in with Halley on his solo, responding to his power and the long melody lines.  The splendid sound quality of the album (kudos to engineer Jim Clouse) makes all the instruments stand out (note the clarity on the bass solo). The final track, "The Journey", is the longest track (17:02) and it's quite a ride – be sure to catch Halley's great, blues-drenched, solo near the close.

"Terra Incognita", with all its twists, turns, and interactions, is worth exploring.  This quartet certainly plays with great fire yet the fire does not always present itself as "noise" or "free" blowing.  Rich Halley, Matthew Shipp, Michael Bisio, and Newman Taylor Baker are on a musical adventure – it's a joy to be part of their collaboration as well as their sonic explorations!  Rich Halley should come East more often!

For more information, go to www.richhalley.com.