As a novice jazz writer in the early 1970s I'd read Nat Hentoff, Whitney Ballet, Leonard Feather, Steve Lake (in England's Melody Maker), DownBeat, and others, in hope that some of those styles would rub off on me.  It took time but I finally realized two important things; 1) - readers appreciate you more if you speak in your own voice and 2) - if you really engage in deep listening and do not rely on snap judgements, you will find the words to describe the indescribable.  Still working on it!

I still seek out as many writers as I can (the Internet certainly helped that search) and discovered Mark Stryker (pictured left) a decade or so ago.  His articles for the Detroit Free Press helped to open my eyes to the importance of the city's jazz scene on modern jazz and the many musicians who came from the area  Like most larger U.S. industrial cities, Detroit's neighborhoods were filled with bars and nightclubs, places for workers to take it easy after a long day or long week in the factories. Many of those clubs had live entertainment where jazz and blues musicians older and younger cut their teeth playing all styles of contemporary. 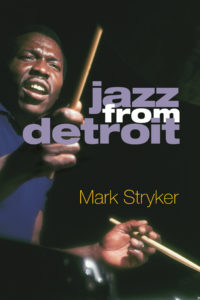 Mr. Stryker has created a history of those people and their impact on the city and beyond, in an extremely well-researched and lovingly written book. "Jazz From Detroit" (University of Michigan Press) traces the development of the city's once burgeoning jazz scene to its lean years (really, since the 1990s) to today and a sense of rebirth for the music, musicians, and the cities.  In six parts, the author profiles legendary folks, such as composer/bandleader Gerald Wilson, vibraphonist Milt Jackson, pianists Barry Harris, Tommy Flanagan, and Roland Hanna, guitarist Kenny Burrell, bassist Ron Carter, and saxophonist Joe Henderson.  That's just the first section of the book. Mr. Stryker makes sure the readers understand how important the Jones Brothers – pianist Hank, trumpeter/composer/arranger Thad, and drummer Elvin – were and still are to the music of the 70s, 80s, and 90s and into the 21st Century.  We meet the musicians of the Detroit Jazz Workshops and other Black music organizations of the 1970s that gave artists such as pianist Kenn Cox, trumpeter Charles Moore, trombonist Phil Ranelin, saxophonist Wendell Harrison, and,  most of all, trumpeter Marcus Belgrave whose spirit and mentorship of young musicians inspires the final third of the book. 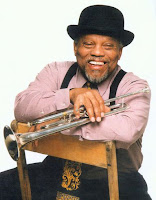 Mr. Belgrave (1936-2015) worked with the Ray Charles Orchestra in the early 1950s, moved to NewYork City where he played with Eric Dolphy and Charles Mingus, and moved to Detroit in the early 1960s to become a staff musician at Motown Records.  Part five of "Jazz in Detroit" looks at a number of musicians that Mr. Belgrave mentored including pianist Geri Allen, saxophonists James Carter and Kenny Garrett, bassists Robert Hurst and Rodney Whittaker, and drummers Kareen Riggins and Gerald Cleaver.  Most, if not all, of those listed serve (or served) as mentors or teachers to younger musicians in the Detroit area.

The final section looks at the present-day situation (as of 20
18) and offers hope for the proud city and the music it sired.  Throughout the book, Mr. Strkyer gives examples of the music, offers insight into what life was like in the city during the youth and early careers of the musicians – an important factor in the development of these people is what the public schools and its dedicated teachers were able to provide in the way of instruction, band opportunities, and access to instruments. 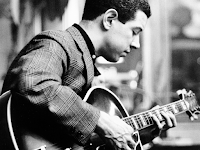 "Jazz in Detroit" is a deep dive into the heart and soul of a city that created so much of the important music of the 20th Century.  For this reader, the descriptions of the musicians as they were playing are often priceless: for example, the author writes about Elvin Jones's drumming – "On a technical level, Jones reinvented the fundamental bebop ride cymbal beat with his right hand. He reorganized the standard ding-dinga-ding pattern, breaking up the beat with fluidity and phrasing over bar lines. Jones scattered triplets across the drum kit with his left hand and integrated all four limbs into a churning undertow. He further unshackled the beat by abandoning the conventional practice of accenting beats 2 and 4 in every bar of 4/4 time on the hi-hat. Instead, he folded the hi-hat into his vortex."  Then, there's Kenny Burrell's tone on guitar  (pictured above)- "Instantly recognizable, it’s a singing sound, a seductive purr, with a faint halo of reverb and a refined attack that’s crisp upfront but finishes as warm and mellow as cognac."

Mark Stryker makes musical history come alive in this book. If you're curious about that history, its roots and musicians, plus its implications for the future, look no further than "Jazz in Detroit" – the book is necessary reading!

For more information, go to jazzfromdetroit.com.
Posted by Richard B. Kamins at 3:36 PM