And, Time for Four Threes!

The trio of Zach Brock (violin), Jon Deitmeyer (drums), and Matt Ulery (bass) has worked together in various larger groups and on recordings by both the violinist and bassist.  But, never as a three-piece group: that is, until the last few years (the one exception is one track on Ulery's 2014 Greenleaf album "In the Ivory").  All three are composers and very busy sidemen with Brock playing with groups such as Snarky Puppy and bassist Stanley Clarke's band, Ulery playing in numerous ensembles throughout the Chicago area, and Deitmeyer with pianist/vocalist Patricia Barber and pianist Phil Markowitz. 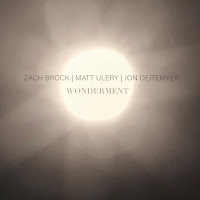 The band's eponymous debut album, "Wonderment", is out now on bassist Ulery's Woolgathering Records.  The 12-song program features four compositions by each member; yet, each piece plays to the strengths of the trio as an ensemble. Whether they are dancing delightfully (Deitmeyer's "Wokey Dokey") or creating a mysterious flow (Brock's title track) or negotiating a tricky rhythm ((Ulery's "Pumpkin Patch"), the music shines with creative interactions, well-drawn melodies, and fine solo moments.  There is a full-out "rock" feel, thanks to Deitmeyer's solid drumming (he "kicks it" with such glee), on "Cry Face" and make sure to listen to how articulate and deep Ulery's bass lines sound on "Yge Bieve."  Brock's blues and bluegrass sound comes to the fore on the lovely ballad "Cheyenne" – at times, the violin sounds like a voice singing a plaintive ballad.

The album closes with the high-spirited "Happy Place."  Note Brock's strummed intro (sure sounds like a mandolin) and how he dances atop the funky rhythms during his solo.  "Wonderment" indeed! And in fact. This music is a joy to behold from beginning to end.  Playing with your friends is often great fun – to do just that in the studio is an impressive accomplishment.  Enjoy this fine new CD from Zach Brock, Matt Ulery, and Jon Deitmeyer: if they are ever playing anywhere near you, go catch them in concert!!

For more information, go to www.mattulery.com/product/wonderment/.

In the months before and until the release of this album, the trio was known as Triptych.  Here's the Trio live: 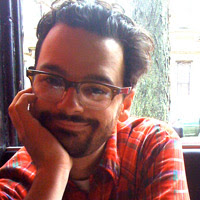 Alto and soprano saxophonist Jeremy Udden (pictured left) moved to Boston, MA, in the mid-1990s to study at the New England Conservtory of Music. Once there, he met, studied, and played with people such as saxophonists George Garzone, Jerry Bergonzi, and Allan Chase, pianists Fred Hersch and Paul Bley plus trombonist/ arranger Bob Brookmeyer. He also began a friendship and musical relationship with trumpeter John McNeil with whom he recorded three albums for Sunnyside Records.  Udden also leads a group called "Plainville" that has recorded several albums for Fresh Sound New Talent and one for Sunnyside.  He's recorded with the Either/Orchestra, pianist Frank Carlberg, Darrell Katz's Jazz Composers Alliance Orchestra, and vocalist Amy Cervini. 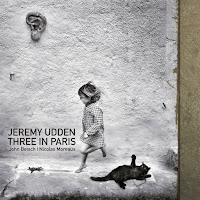 While in France several years ago, Udden met bassist/synthesist Nicolas Moreaux and they recorded album of duets plus the "Belleville Project" with a sextet. The saxophonist returned in 2018 and worked in a trio setting with Moreaux and American-born drummer John Betsch now making his home in Paris. Udden chose 30 tunes to present to his band mates including a number of pieces by the late soprano saxophonist Steve Lacy (1934-2004) whom Betsch had played with for two decades.  The resulting album, recorded over two days in August 2018, is aptly titled "Three in Paris" (Sunnyside Records) – the 10-sonh program features two Udden originals, a group improv, four pieces by Mr. Lacy plus one each from Duke Ellington, Don Cherry, and Jerome Moross. Moross's 1954 ballad "Lazy Afternoon" is a lovely vehicle for Udden's soprano sax, Moreaux's splendid counterpoint, and Betsch's smart brush work.  And Ellington's "Azure" (first recorded by the Master in 1937) has a lovely Caribbean lilt with the soprano sax lines floating over the dancing drums and melodic bass lines.

The four Lacy compositions range from the alto sax-drums conversation titled "Who Needs It" to the playful "Prayer" during which Betsch moves in a sprightly fashion over his drum kit while Moreaux and Udden (still on alto sax) carry on a musical conversation.  Even more playful is "Bone" where the drums and rapidly-walking bass lines propel the alto solo forward. Udden responds by feeding off that fire, moving "out" and away from the melody.  The only Lacy tune played on soprano is "The Crust": again Udden is in conversation with Betsch only and they jauntily move through the piece as if they had not a care in the world.

"Three in Paris" just might take its cues from the fascinating cover photo by Alain Laboile ("L'orielle" is its title and is part of the French photographer's series "The Family").  The music is certainly playful, a bit mysterious at times, and should be enjoyed for the interactions, the abundant melodies, and the sweet sound that Jeremy Udden creates with his friends.

For more information, go to www.jeremyudden.com.

Here's one of the Steve Lacy songs:

Drummer and composer Jeff Williams has a career that spans five decades.  Having worked with Stan Gets, Dave Liebman, John Abercrombie, and Frank Kimbrough.  For the past two decades, he's split his time between London and New York City and went back to recording as a leader (after a 16-year hiatus) when he signed in 2011with Whirlwind Recordings.  Since then, he's released four albums, two with his NYC-based quartet and two with his British quintet. While the music sometimes hearkens back to his earlier recordings, his style of composing and playing has certainly become his own "sound." 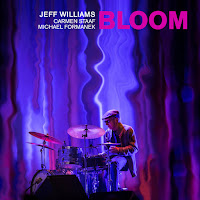 Album number five is here: the meeting of musical minds came about when the drummer was in New York City in early 2018 playing in saxophonist Dan Blake's "The Digging."  Blake had just replaced his pianist with Carmen Staaf and Williams felt an immediate musical kinship. On the same trip, he became reacquainted with bassist Michael Formanek who has met when the young musician moved to the City in the 1970s – six months later, the trio entered the Samurai Hotel Studios in Astoria, Queens, New York and the sessions yielded "Bloom" (Whirlwind).  Each participant contributed compositions (Williams has four, Ms. Staaf three, and Formanek two) plus there's one group improvisation and a lovely reading of bassist Buster Williams's "Air Dancing" (first recorded by the composer with guitarist Larry Coryell in 1988 and than the following year on his own "Something More" album with pianist Herbie Hancock. 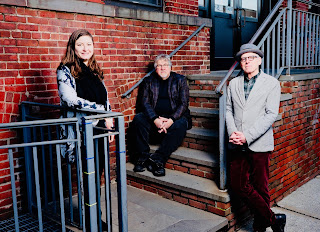 Much of the trio's music has a joie de vivre brought on by the sheer joy of playing together.  Whether they are playing introspective slow pieces (such as Formanek's "Ballad of the Weak") or up-tempo "soft-shoe (the drummer's "She Can' Be a Spy") or Ms. Staaf's modal blues ("New York Landing"), the musicians are on the same wave length.  Ms. Staaf, who co-leads a group with drummer Alison Miller and works with artists as diverse as vocalist Allegra Levy, klezmer clarinetist Michael Winograd, plus is musical director for Dee Dee Bridgewater, is a delightful player – she certainly can swing but also can produce long, flowing, phrases (as she does on Williams's "Another Time").  She certainly pays attention to details, listens closely to the rhythm section (as they do to her), ands builds her solos from a combination of melodic and rhythmic explorations. Her composition "Chant", which closes the program, is an atmospheric ballad with a truly enchanting melody, brilliant bowed-bass work, and Williams's orchestral cymbal colors.

Williams and Formanek shine throughout. Whether working together to push a piece forward (listen to what they play underneath the piano solo on "Short Tune") or making space for their own solos, they are always in sync.  The bassist is known for his muscular playing plus he is a top-notch composer for ensembles large and small.  Check out his Herbie Nichols-inspired "A Word Edgewise"where the song, anchored by his rapidly walking bass lines, always seems to be rushing forward ever-so-sightly out of control.

In a world with so many piano trio albums released every month, "Bloom" stands out on the strengths of its compositions and the excellent musicianship of Jeff Williams, Carmen Staaf, and Michael Formanek. Willams may be the leader and producer but this subtle, swinging, and singing album truly is a group effort.

For more information, go to www.willfulmusic.com.

There are hundreds of albums every year that seem to come and go. In the instance of the jazz world, unless the group is touring or gets a write-up in a major publication or has a "famous" name or two, the album is set aside to make room for the next recording. For some artists who spend years playing their trade in clubs and concert halls, it's not fun to be ignored. But that part of the business has always been there. You never know what will capture the fancy of listeners or when that might happen. Numerous artists have told that sell more recordings on gigs than through the internet or in the retail world. 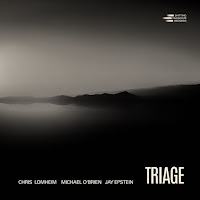 The trio of pianist Chris Lomheim, bassist Michael O'Brien, and drummer Jay Epstein often worked together in the years before the bassist moved to NewYork City from the Twin Cities (Minneapolis-St. Paul). All three are quite busy with the pianist leading his own trio as well as playing with other groups, the bassist working with the likes of drummer Matt Wilson, Harry Connick Jr., and saxophonist Joel Frahm while the drummer has recorded and/or toured with pianist Bill Carrothers, the late Sarah Vaughan, and saxophonist Eric Alexander (among many others).  These three veterans have now recorded their debut album.  "Triage" (Shifting Paradigm Records) is an odd title for this lovely group of original songs (eight by Lomheim and three by O'Brien) but don't let that distract you from listening.

While the music works as an accompaniment to a late afternoon time on the porch or to play during dinner, when you sit and really listen one hears how enjoyable these 11 pieces are.  Particularly attractive is the pianist's "Even More Than Before", a medium-tempo ballad with the hint of a Burt Bacharach melody (as well as a section of the chorus that reminds this listener of the 60's hit "Goin' Out of My Head") –pay attention to O'Brien's foundational bass work and the dancing cymbal work of Epstein.  The bassist's "At What Price Happiness" has a faint touch of bossa nova in its rhythm. The airy melody line, the quiet interactions of the rhythm section, and the long, luxurious, piano solo (as well as the melodic bass solo), all adds up to an enjoyable aural experience.

As one returns to "Triage", you begin to see and hear the influence of the Bill Evans Trio and the Keith Jarrett Standards Trio. Specifically in the importance of bassist O'Brien (pictured left) and how his solos plus his great ear for melody meshes with the work of pianist Lomheim.  And, like Evans and Jarrett, smartly written melodies are so important to how the music opens up for the solos. Epstein's role is to make sure the music flows on a even keel yet even he get many opportunties to interact with the melodic lines and solos.

The music of Chris Lomheim, Michael O'Brien, and Jay Epstein truly unfolds when one really pays attention.  Their professionalism and camaraderie makes "Triage" a delightful experience, one that should come and stay.

For more information, go to www.shiftingparadigmrecords.com/chris-lomheim-michael-obrien-jay-epstein.html.