This is a thrilling time of the summer for me in that I have time before school starts again to listen and to write. On top of that, I have a slew of large ensemble albums to dig into. 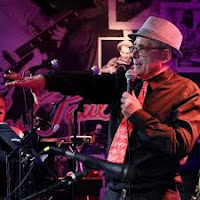 Arranger, composer, conductor, and alto saxophonist Ed Palermo (pictured left) has had quite a career. He has worked and toured with many artists including Aretha Franklin, Tito Puente, Eddie Palmieri, Celia Cruz, Lena Horne, Tony Bennett, Mel Torme, Lou Rawls, and The Spinners  He has written and arranged for the Tonight Show as well as dancer Maurice Hines.  Since 1997, he and his Big Band have been performing and recording music by Frank Zappa. Of the eight albums he has released over the past two decades, only two not have music by the late Zappa. One more splits the program between Zappa and Todd Rundgren.  He has won international praise not only for his inventive arrangements but also for exposing a larger audience to this music. 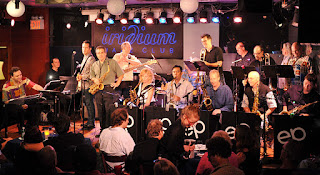 Album #9 by the EPBB, "A Lousy Day In Harlem" (self-released), turns the spotlight on Palermo's compositions plus delightful interpretations of pieces by Duke Ellington, Egberto Gismonti, Gigi Gryce, John Coltrane, Thelonious Monk, and the duo of Renee Rosnes and Walt Weiskopf.  The 15-piece ensemble is in fine form throughout and there are a number of powerful solos including several by Mr. Palermo.  The album opens with "Laurie Frink", the leader's piece dedicated to the late trumpeter and teacher.  Despite the presence of three fine trumpeters (see personnel below), the solos are by soprano saxophonist Phil Chester and tenor saxophonist Bill Straub. Dig the splendid rhythm section work under the soloists especially pianist Bob Quaranta and drummer Ray Marchica. There's a splendid rearrangement of Gisberti's "Sanfona" including Zappa-like sounds in the harpsichord/keyboard of Ted Kooshian.  Chester's soprano solo is quite sweet over the steady rhythms.  "Brasilliance" is a spirited romp through Mr. Ellington's tune that he wrote for his "Latin American Suite" (1968).  Great solo from pianist Quaranta before the piece takes a quick turn into Juan Tizol's "Caravan" for solos from trumpeter John Bailey and saxophonist Straub.  The entire band plays hard on the delightful "Minority", the Gigi Gryce classic.  The saxophone section plays the melody and the brass join on the second time through.  The leader steps out for a spirited solo and then does a call-and-response with the sections.  Monk's "Well You Needn't" jumps out of the gate and features solos by the leader once more, trombonist Charley Gordon, and trumpeter Bailey – The arranger manages to throw in quotes from several other Monk tunes; all that and more in 3:02.  Tenor saxophonists Straub and Ben Kono introduce Coltrane's "Giant Steps" with the opening lines of "Dueling Banjos" (from "Deliverance") before the band leaps into the piece.  The tenorists each get a spotlight but don't miss the excellent electric bass work of Paul Adamy. 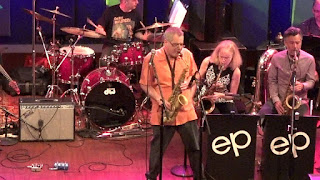 Regarding the Palermo originals, they are all impressive.  "Like Lee Morgan" celebrates the fine trumpeter from the 50s and 60s – this time, trumpeter Bailey gets to step out for the fine solo.  Tap dancer Nicki Denner joins the EPBB for a spirited dance on "The One With The Balloon", an evocative melody that also makes room for a solo from trombonist Gordon and a touch of accordion from Kooshian. Soprano saxophonist Cliff Lyons is featured throughout the sweet ballad-waltz "Affinity" though the brass and then the reeds get to play the handsome melody as well.

"A Lousy Day In Harlem" is Ed Palermo's satirical title take on the famous 1958 Art Kane photograph – click here – that featured nearly five dozen jazz greats and some neighborhood kids sitting on those very steps.  But the music from the Ed Palermo Big Band is no laughing matter unless you're laughing at such delightful and audacious music.  Put the disc on play, turn the volume up loud, and watch the party start!

For more information, go to www.palermobigband.com.

Born in Vancouver, British Columbia, Canada, composer, conductor, and arranger Jaelem Bhate has been making a name for himself in both the jazz and classical spheres.  He's now the assistant conductor of the Vancouver Philharmonic after spending 2018 as assistant conductor of the National Academy Orchestra of Canada under Maestro Boris Brott.  His classical training includes work in New York City and Oregon plus Bhate just completed his Master of Music degree in Orchestral Conducting at the University of British Columbia. He also leads the Last Call Jazz Collective and has composed works for a large ensemble.  Judging by the amount of work he has taken on, the young man seems comfortable with his feet in both musical worlds. 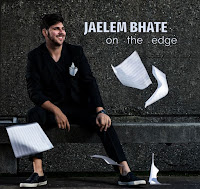 Bhate's debut recording, "On The Edge" (self-released), features an 18-member ensemble made up of musicians from Western Canada many of whom have worked with the composer in the Last Call Collective and all who are busy playing and teaching. The centerpiece of the album is the four-part, 29-minute, "Pacific Suite", a celebration of the composer's life in British Columbia. "Part I: Straits and Narrows" is a lively evocation of life in the edge of the North American continent with the melody and harmony shared by the reeds and brass while Andrew MacDonald (piano), Jacques Forest (bass), especially Duran Ritz (drums) pushes the music forward. Forest's unaccompanied opens "Part II: Weeping Skies" – his phrases remind this listener of Charlie Haden. The piano and guitar (Ricardo Halabi) enter next and then the entire band enters playing the handsome melody.  "Part III: Uninhabitation" opens with a somber brass chorale before a lovely ballad takes shape – one can picture the composer deep in the forests of the Province listening to the quiet all around him.  The closing section, "Sea of Glass", has a bluesy feel, a lively shuffle rhythm, and sweet melody line before moving into the solo section.

The other pieces on the album each have standout moments.  Guitarist Halabi gets to strut his stiff on "Strung Along" as the band digs into the blues-rock feel.  "Wishful Thinking" has a delightful alto sax solo (unidentified) and impressive sectional writing. The lovely mix of reeds and brass usher in the sweet ballad "When I Was Loved", a song that also features an emotional trumpet melody and it's that trumpeter (possibly Michael Kim) who leads the way through the piece. One can hear the influence of Thad Jones on this piece.

From the exciting title track that opens the album to the uptempo lullaby "You Will Be Ok" that closes it, "On The Edge" is an impressive statement from a young composer who is just beginning to find his voice.  That written, this debut recording from Jaelem Bhate illustrates his strengths as a composer and his excellent arrangements for the reeds and brass. For more information, go to www.jaelembhate.ca.

Here's one of the fine pieces on the album: