Much has been written about composer and multi-instrumentalist Tyshawn Sorey over the past year and for good reason. He is a musical polyglot, seemingly without borders (other than time and his music often challenges our perception of time), and he can drive a band from his position behind the drums in the manner of Max Roach, QuestLove, and Eric Harland.  When he was studying for his Masters Degree at Wesleyan University, Sorey also was a member of the University's Klezmer ensemble, playing keyboards and mighty impressive gut-bucket trombone.  He used his time at the school to study with Anthony Braxton, Alvin Lucier, and Ron Kuivila as well as play with various ensembles.  Earlier this year, he earned his DMA in composition from Columbia University and, at the end of this month (8/17), becomes the John Spencer Camp Professor of Music at Wesleyan. 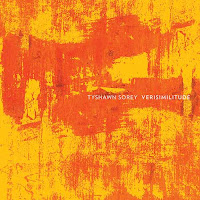 And, he has a new recording.  "Verisimilitude" is his sixth album as a leader and fourth for Pi Recordings.  The program features his longtime "working trio" of Corey Smythe (piano, toy piano, electronics) and Chris Tordini (bass) playing its way through five Sorey originals, only one of which is under 10 minutes.  These pieces cha;lunge the listener to hear a trio in different aspects, to understand that the role of each musician is not to impress with technique or speed but to advance the narrative of the music.  The impressionistic quality of the music and the overwhelming softness can lull the listener. Yet, there are moments of power, both melodic and percussive, as if great gust of wind came through the window.

I am not going to give you an account of each track; instead, you should approach this music with open ears. Be prepared to play the 69-minute program several times all the way through.  This is not background music to be played with guests in the house or while eating dinner. It is music to ponder, to explore, to note how the "traditional" trio approach seems to be eschewed in favor of a group dynamic.  Pay close attention to the work of bassist Tordini. He often drops out but is so important to the sound of these pieces. He can be percussive, melodic, supportive, foundational, and minimalist yet is a necessary element of the songs.

The elegiac quality of "Flowers for Prashant", a musical tribute to the late filmmaker Prashant Bhargava, is a wonderful place to enter the music yet, since the songs all flow into one another, you should start at the beginning.  Have patience with this music - so many of us listen to music to be constantly stimulated, go from high to high, but "Verisimilitude" asks you to slow down, to appreciate every sound, to engage the silence between notes, to stop judging and just listen.  This music is not for everyone and for every minute of the day.  It is contemplative and powerful.  Be open and you'll be rewarded and more so, refreshed.

To find out more, go to pirecordings.com/artist/Tyshawn_Sorey. Here's a link to a recent NYTimes article by Giovanni Russonello that will give you even more historical perspective - click here. 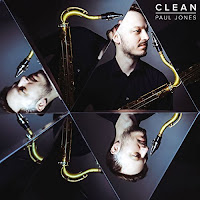 In January of 2015, I was quite impressed by saxophonist and composer Paul Jones's debut album, "Short History" (read review here). I especially was impressed by his compositional and arranging skills.  All that and more is on display on his sophomore effort, "Clean" (Inside Out Music).  With the exception of pianist Glenn Zaleski, he employs the same sextet (alto saxophonist Alex LoRe, guitarist Matt Davis, bassist Johannes Felscher, and drummer Jimmy Macbride) but also adds the SNAP Saxophone Quartet (Nicholas Biello, Andrew Gould, Sam Dillon, and Jay Rattan), the Righteous Girls (flutist Gina Izzo and pianist Erika Dohi) plus Mark Dover (clarinet), Ellen Hindson (oboe), Nanci Belmont (bassoon), and Susan Mandel (cello) on numerous tracks.

Looks pretty crowded but surprisingly there is little or no clutter on the 14-song programs.  There are five tracks that are built from "Romulo's Raga", a Jones composition dedicated to Romulo Herrera, the longtime chef at the Cornelia Street Cafe in New York City who was murdered in his home in January of 2016.  Jones was away at the time and shocked by the brutal killing, creating an homage that called for a wind octet plus piano.  The "...Raga", while barely over a minute, has an intensity that illuminates the piece.  The other four short compositions, titled "Ive Sn Th Fra Md", "It Was Brgh Cold", and "Im Pretty Uch Fkd", serve as segues to the sextet performances yet, though short, each has a power to stand on its own. Save for the final one, which is the closing track; "The Minutiae of Existence" is a miniature delight and brings the program full circle.  On my laptop, the music does to not stop but goes back to the beginning , the first track being "Ive Sn Th Fra Md", and it helps to point out not only how all the pieces are interconnected but also

The sextet (and sextet plus) music is also quite fascinating.  With four melodic instruments on a front line, it's fun to hear how the composer Jones shares melody and harmony lines.  The title track rolls in  on short figures from the saxophones with the melody played by guitarist Davis, counterpoint from the piano and then switched over to the tenor.  Listen to how Jones plays with the rhythms below the theme before the solos begin over a static rhythm. Macbride drives beneath the solo while the insistent guitar strumming holds the tempo. At 8:46, the songs allows for various sections and solos, making it easy for the listener to fall under its spell.

The jaunty melody of "I Am an American", introduced by bass and piano, creates an easygoing feel.  Bassist Felscher gets the first solo, o long and melodic solo, before Jones steps in.  Ms. Belmont and Ms. Mandel join the sextet for "Buckley Vs. Vidal", a lengthy conversation (but not a debate) with a bounce to its beat and colors provided by the guest "voices".  The guests enliven "Centre In The Woods", a handsome melody played over a tango  rhythm. One can visualize dancers whirling around the floor as the saxophone solo rises over the slowly intensifying background.

As artists take control of their music (or are given free rein by labels), listeners are being blessed by a panoply of engaging projects. "Clean" is one of those albums that grows stronger each time you dig into it. You notice interactions, the fine melodies, the smart arrangements both for the sextet and for the wind octet, and solos that have arrives and are not just technical displays.  If you dig around online, you'll find alternate versions of some of the pieces on the album. Check those out too.  In his liner notes, Paul Jones writes that while working on the material for this album, he was listening to Kendrick Lamar ("To Pimp a Butterfly"), Philip Glass ("Glassworks"), and Steve Reich ("Music for 18 Musicians") as well as the immediacy of contemporary hip hop.  Check this out, spend time inside the songs, and you should be pleased.  To find more, go to www.paulthejones.com.

In the meantime, enjoy the title track: