It's a busy time for pianist, educator, and, now, author Fred Hersch.  His latest solo album, "Open Book", will be released by Palmetto Records on September 8th (my review is here). On September 12, his autobiography "Good Things Happen Slowly: A Life In and Out of Jazz" will be published by Crown Archetype (Penguin Random House LLC). Later that week, Jazz at Lincoln Center presents the pianist/composer's "Leaves of Grass" in the Appel Room for four shows over two nights (9/15-16).  Joining Hersch for the shows will be a number of of artists who appeared on the 2005 Palmetto album of the same name including vocalists Kate McGarry and Kurt Elling plus trombonist Mike Christianson, saxophonist Tony Malaby, and drummer John Hollenbeck - rounding out the 10-person ensemble will be Bruce Williams (reeds), Nadje Noordhuis (trumpet, flugelhorn), Jody Redhage (cello), and John Hébert (bass).  For ticket information, go to www.jazz.org/events/t-6271/Fred-Hersch-Kurt-Elling-Kate-McGarry-Leaves-of-Grass/.

As for the book, I had a hard time putting it down.  Hersch, and his collaborator David Hadju, basically, "tell it like was/is."  The pianist, who has been candid about his homosexuality and HIV-positive status for nearly twenty-five years, talk about his upbringing, his discovery of music at an early age, his parents troubled marriage, and how hard a time he had as a teenager (lots of marijuana and playing gigs at an early age).  Yet, he never feel sorry for himself, is honest about how much he hated to practice piano (especially for his classical music lessons).  The best parts of the story deal with his jazz "apprenticeships" with Art Farmer and Joe Henderson, his relationship with Nonesuch Records (not an easy one), his relationship with Scott Morgan, and the illness that nearly killed him in 2008-09. If you have a squeamish stomach, you want to forego the details of the symptoms, the ensuing coma, and the long, amazing, recovery.

Yet, the book, like the music Fred Hersch has created over his career, is far from depressing.  He's a survivor (several times over) and admits to being a better musician and more appreciative human being.  He does not spend a lot of time going in to the mechanics of his music but Is fulsome with his praise of his various rhythm sections, his doctors, his older brother Hank, and his friends. He also does not pull punches with his criticisms and is not shy writing about his drug use as he made his way through the 1970s and 80s. But this is no "show and tell" as Hersch writes about the people who helped him along the way (including Lorraine Gordon at the Village Vanguard).  When you listen to his new recording or watch the video of "My Coma Dreams" or sit in a club and watch how he works with his Trio, you realize a number of things including how lucky he is to be alive in the 21st century and just how impressive a musician and creator he is.  That latter observation makes us the lucky ones.

To find out more, go to www.penguinrandomhouse.com/books/253693/good-things-happen-slowly-by-fred-hersch/.

I can't remember now the first time I heard the guitar playing of John Abercrombie who passed away on Tuesday August 22.  He first came on to the creative music in after a stint at Berklee College of Music, playing first with Johnny "Hammond" Smith. Abercrombie went on to work with drummers Chico Hamilton and Billy Cobham as well as saxophonist Gato Barbieri.  He signed to ECM in 1975 with his first releases being "Timeless" featuring drummer Jack DeJohnette and keyboard whiz Jan Hammer.  Along the way, he recorded and toured with fellow guitarist Ralph Towner, formed Gateway with DeJohnette and bassist Dave Holland.  He also recorded with several different ensembles for the label including his last quartet with pianist Marc Copland, bassist Drew Gress, and drummer Joey Baron. Abercrombie also added his guitar stylings to albums by Charles Lloyd, organist Jeff Palmer, plus trumpeters Enrico Rava and Kenny Wheeler. 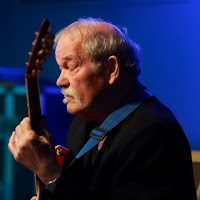 It's amazing how few pictures there are of John Abercrombie without a guitar - because above all, he was a player.  In his early days, he often experimented with the sound of his guitar but while he could still create mysterious compositions as he aged, his sound got rounder and cleaner, his phrases often surprising yet soothing as well. And, the man could "swing" as he picked one articulate phrase after another.

For a more thorough at John Abercrombie's life and career (along with videos and an interview, go to ottawacitizen.com/entertainment/jazzblog/rip-john-abercrombie.

Here's a track from his latest album: 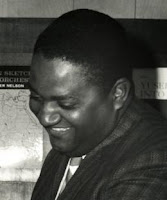 One of the great"classic" jazz albums of the early 1960s has to "Blues and the Abstract Truth."  Featuring the compositions, arrangements, and tenor saxophone of Oliver Nelson (1932-1975), the music showed just how the blues permeated much of modern music anyhow it could "speak" with so many voices.  By the time the album was released on Impulse Records, Nelson had built a good career with albums released on Prestige featuring artists such as trumpeter Kenny Dorham and saxophonist Eric Dolphy. That career would skyrocket over the next decade due to the numerous movie soundtracks and television shows the St. Louis, MO, native composed and scored.  Yet, he also wrote classical music, much of which deserves to be rediscovered an played by symphony orchestras in the US and abroad. 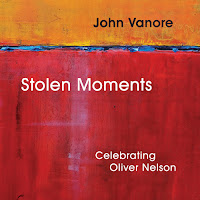 Kudos to trumpeter, arranger, and conductor John Vanore on his new album.  "Stolen Moments" Celebrating Oliver Nelson" (Acoustical Concepts Inc) features an all star 14-member band playing compositions and arrangements from throughout Nelson's career.  Pieces such as "Greensleeves", "A Taste of Honey", and "St. Louis Blues" sit easily alongside the title track (a highlight of the "Blues and The Abstract Truth" - the song with that name did not appear on that album but on the followup), "Self Help is Needed" (from 1970's "Black, Brown, and Beautiful"), and "Reuben's Rondo" (from 1975's "Skull Session").  Perhaps the best thing Vanore, who, as a young man studied with Nelson one summer before joining the Woody Herman Band, does is not mess with the music.  Though the album credits the leader with "reimagining" Nelson's songs, what he has done is arrange the music for this unique ensemble. 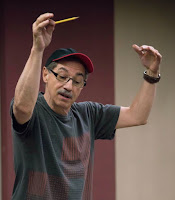 Each track has great ensemble work plus an impressive solo or more.  Wilson's alto stands out on "Self Help..", "El Gato" (which also features a scorching solo from Malach) plus he creates a beautiful soprano solo on "I Hope in Time a Change Will Come."  Keberle shines on "Greensleeves", a tune that packs a lot into 2:39.  Ballou is understated then forceful on his long spotlight on "St Louis Blues" followed by a solo that has him swinging out of his shoes on "Blues And the Abstract Truth."   After Ridl's sparkling solo on the title track, the leader takes the spotlight for a short but strong trumpet statement.

In a perfect world, people will pick this album up and discover just how much good music Oliver Nelson brought to the world in his short but jam-packed career.  John Vanore has done us all - casual listeners and reviewers - a really good turn. "Stolen Moments" should steal your heart, mind, and your ears!

For more information, go to www.johnvanore.net.

Here's a mini-documentary about the recording:

Here's a short compilation of pieces from the album: