In the pantheon of great American poets, Carl Sandburg (1878-1967) has often gone in and out of favor (there are many folks who consider him a mere disciple of Walt Whitman) but there is little doubt that the Galesburg, Ohio native was an original. The son of Swedish immigrants, he had a number of jobs after college yet also published a three books of poetry before 1908. He married Lilian Steichen that year and began a career as a journalist.  At the same time, Sandburg became a Socialist and the influence of that political movement can be seen in a number of his poems.  In 1914, Poetry Magazine published a group of his poems which brought him to a wider audience which expanded greatly two years later with the publication of the "Chicago Poems."  Before the end of the decade, he had published another collection of poems and a prose essay on the Chicago race riots. He became financially independent in 1926 when the first   volume of his five-volume of Abraham Lincoln was published. His collections of American folk songs was also a big hit with the public and helped to bring more attention to indigenous music.  Sandburg won several Pulitzer Prizes during his lifetime, also played guitar accompanying himself at readings. He was truly a man of and for the "people."  (Check out a group of his poems and read his full biography by going to carl-sandburg.com. 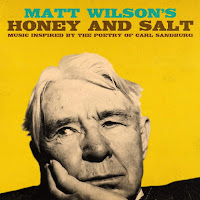 Drummer and composer Matt Wilson has had a life-long interest in the work of Carl Sandburg. Born and raised in Knoxville, Ohio (the town to the west of Galesburg, the drummer's great-great aunt was married to the poet's first cousin - there is a picture in the album's booklet of Matt's father Tom with that cousin (Uncle Charlie).  For those who have followed Matt Wilson's career know that his first album as a leader, "As Wave Follows Wave" (1996 on Palmetto Records) is named for a Sandburg poem.  In 2001, he received a grant from Chamber Music America to create a program of original songs that featured selected works of Sandburg.  He put together a quartet with saxophonist and clarinetist Jeff Lederer, guitarist and vocalist Dawn Thomson, and  acoustic bass guitarist Martin Wind.  Cornetist Ron Miles joined the group along the way and in October of 2016, the ensemble, now dubbed Honey And Salt (yes, named for a 1962 collection of the poet's works), gathered at engineer Matt Balitsaris's studios on Maggie's Farm, and the results "Matt Wilson's Honey and Salt: Music Inspired by the Poetry of Carl Sandburg" is the drummer's ninth album for Palmetto.

There is so much to like about this project.  Purists may be put off by the fact that the music encompasses many different styles, from rockabilly to swing to folk to avant-garde to "cool jazz" and more.  Before this project, I had not heard much of the work of Dawn Thomson so her presence is a revelation: she has a fine vocal style, displaying a fine range as well as great emotion plus her guitar  is a wonderful voice in the mix, especially her rhythm work and background playing. Jeff Lederer and Ron Miles are a formidable team, the former for his ability to both enliven the proceedings as well as be soothing in the background while the latter has such a warm sound, even his "wilder" excursions have a sense of comfort in them.  Martin Wind plays exclusively acoustic bass guitar; it's the first time he's recorded using just that style of bass but the depth of his notes and his active foundational lines plus his counterpoint lines often stand out.

Then there's the leader.  It's so obvious that this project is a labor of love; these compositions are among the best Matt Wilson has composed in his career, illuminating his senses of melody, harmony, interaction, and, of course, fun.  He creates a duet with the poet on "Fog" - the poet's voice is heard first, then the drums joins playing the voice patterns of Sandburg.  The drummer plays a call-and-response pattern, first, the melody then the interpretation in a wonderful give-and-take. There are several other tracks on which the drummer plays the melody lines.

The album is broken into three "Chapters" and an "Epilogue" with 18 tracks. Besides Ms. Thomson's vocals and the poet's recorded voice, nine of the tracks feature recitations from the drummer, Jeff Lederer, Christian McBride, John Scofield, Jack Black, Bill Frisell, Rufus Reid, Joe Lovano, and Carla Bley.  Frisell reads "Paper 2" which opens the poem read over a light guitar accompaniment before breaking into a raucous, bopping track, with solos from Lederer (a raucous tenor spotlight), Ms. Thomson (a "cool" jazz romp, and Miles (an easy jaunt over the "groovin'" rhythm section.  In fact, do listen to how Wind and Wilson push the piece. The poem is repeated this time with the entire quintet offering counterpoint. Two tracks later, Lovano reads "Paper 1" over the same light guitar accompaniment but the piece fades on the recitation.  In between, Rufus Reid's sonorous bass voice reads "Trafficker", one of the darker poems in the program (about a worn-out prostitute) - the track opens with Wilson's quiet brushes work, then adds Miles's muted cornet, Wind's bass, and the "midnight blue" tenor sax.

Your initial surprise to the different sounds this quintet makes (Lederer also plays clarinet, bass clarinet, piccolo, and harmonium) should turn into admiration and, finally, to joy.  The beauty of pieces such as "To Know Silence Perfectly" (read by Ms. Bley), "Stars, Songs, and Faces", and "I Sang" (both sung by Ms. Thomson) may create quite a positive emotional response. Check out the fiery funk of "Anywhere and Everywhere People" read by McBride as the quintet "rocks out" and the power march of "Choose" (Lederer's piccolo takes a starring role) with its Charles Ives-like leanings will make you smile.

"Matt Wilson's Honey and Salt: Music Inspired by the Poetry of Carl Sandburg" is a smashing achievement. Wonderfully musical, deeply emotional, and so much fun - what more could one want from an artist?  Take it on the road and expose more people to the "populist" poetry, the fascinating melodies, and great band that Matt Wilson has put together in this heartfelt project.  Listen, listen deeply!

For more information about the project and the upcoming September 2017 tour dates, go to www.mattwilsonjazz.com.

Here's a tune with a "country" twang:


Soprano saxophonist and composer Jane Ira Bloom released "Early Americans" in 2016, a trio date with bassist Mark Helias and drummer Bobby Previte, both of whom she had recorded with extensively.  Her new project, "Wild Lines: Improvising Emily Dickinson" (Outline), brings back pianist Dawn Clements who recorded with this ensemble on 2011's "Wingwalker" (the pianist is also featured on Ms. Bloom's 2008 album "Mental Weather" with Helias and drummer Matt Wilson!) Ms. Bloom's latest adventure came about when she discovered that Emily Dickinson (1830-1886) was a pianist and an improviser, a quality the composer could see in the poetry.  After receiving a commission from Chamber Music America/Doris Duke New Jazz Works, Ms. Bloom put together the program that one hears on these two CDs.  There are 14 original compositions plus a solo soprano saxophone reading of the Rodgers & Hart classic, "It's Easy To Remember." 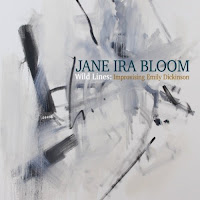 One might be tempted to start with CD 2 because you hear the lines of Ms. Dickinson's that prompted the compositions. Read by actress  Deborah Rush (Broadway and television), most of the pieces are read before the pieces (there are several exceptions).  But you really can hear how pieces like "Emily & Her Atoms" and "One Note from One Bird" (excerpt from "The Gorgeous Nothings") are built from the poems and poem fragments.  The latter tune does open with one note from the piano before Ms. Rush intones "One note from/ One Bird/ is better than/ a million words/...A scabbard/ Needs/ has - holds/ but one/ sword"  - listen to how the quartet expands that one note and those words outward away from its simple center into a musical meadowland with a sweeping melody and roiling drums.

Then there's "Singing The Triangle" during which a letter that the poet wrote that tells of her excitement that "G.F. Bailey's & Co. Great Triple Combination/ will exhibit in Amherst!/ On Friday, May 4th, 1866" - the music is a rollicking illustration of excitement, derring-do, and exuberance (one can almost hear the crowd "oohing and aahing" at the high-wire acts.  The listener may have expected the music to be fairly somber as befits certain opinions of Ms. Dickinson's poems.  Yet, throughout the album, the music bubbles over with glee.  "Cornets of Paradise" opens with powerful drums behind Ms. Rush (pictured left) reciting "Over and over, like a Tune/ The Recollection Plays/ Drums off the Phantom Battlements/ Cornets of Paradise/" - the drums drop out and there soprano sax enters wailing high - Ms. Rush continues with "Snatches, from Baptized Generations/ Cadences too grand/ But for the Justified Processions/ At the Lord's Right Hand."  There 's a quick snippet of gospel and then the quartet goes into an inspired improvisation before moving back right before the close to a modified barrelhouse blues. 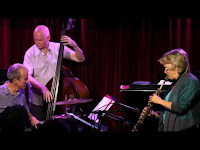 CD 1 features the same instrumental tracks in a different order (save for the final two track on both discs being the exuberant "Big Bill" and the Rodgers & Hart tune).  The music is just as exciting without the poetry but this listener really enjoys how Ms. Bloom integrates the lyricism of the poetry with the often flowing lines of the quartet.  "Say More", on disc 1, opens with a lovely soprano melodic fragment with Previte's quiet percussion, the occasional bass melody, and Ms. Clement's lyrical piano. The piece moves slowly forward and up away from the opening line. Add Ms. Rush's vocal performance and the lyrics to the music, the piece opens up to new interpretations.

"Wild Lines" is a magnificent recording, filled with intelligent and open melodies, inspired interactions, and a collective love of exploration. One should not discount how well the Quartet works together, the powerful and graceful contributions of Mark  Helias and Bobby Previte, the excellent piano playing of Dawn Clement, and, of course, the wonder-filled work of Jane Ira Bloom. The artist could have chosen to release either one of these discs as her new album, they're both delightful on their own.  Together, "Wild Lines" gives the listener an intimate description of the creative process, how the sounds and meanings of words can be translated to the sounds of music, that the creative process can truly be an infinity of riches.  This is a joyful experience for the musicians and for the audience.

For more information, go to www.janeirabloom.com.  Release date for the album is September 8, 2017 and is available for pre-order at amazon.com.