Fred Hersch is now in his fifth decade as a performing artist and composer - the last ten years have seen the most upheaval and revival.  In 2008, the pianist was struck by a AIDS-related illness and was put into a coma by his doctors; when he came out, Hersch needed to learn how to navigate the piano again. The result has seen  him at his most productive, with solo albums, trio albums, a full-length production based on his near-death experiences titled "My Coma Dreams", and his forthcoming memoir "Good Things Happen Slowly: A Life In and Out of Jazz" (coming in September from Crown Archetype). 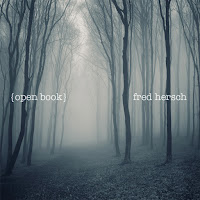 Also in September, Palmetto Records releases "Open Book", Hersch's 11th solo piano recording (and 12th recording for the label).  Recorded live in concert in Seoul, South Korean (four separate nights), the album is both typical and typical of the pianist's output.  Yes, there's a Thelonious Monk composition ("Eronel"), a piece by Antonio Carlos Jobim ("Zinger"), Benny Golson ("Whisper Not"), Billy Joel ("And So It Goes") plus three original pieces.  One of those originals, "Through The Forest", is a fascinating 19:34 totally improvised piece; it's the centerpiece of the album and one of those performances that defies categorization.  There is a darkness to the chords and a narrative quality to the melodies that shows a classical influence (perhaps Schumann, Debussy, Stravinsky, Gershwin) but what stands out most are the leaps from mood to mood the pianist takes. No surprise there is a forest on the album cover.  The music is not dense, you can see through the fog and the trees are bare but the path forward can be detected.  There is a freedom to being lost which can be scary but also pushes you to sharpen your senses, to call on different solutions to see your way through.

Hersch follows the long piece with the much shorter yet equally dramatic "Plainsong", also a piece with classical leanings (though more Romantic).  This is "classic" Hersch, a long, well-constructed melody with powerful harmonies and a rolling bass line.

"Open Book" shows an artist at the height of his creative power without a sign of slacking off.  It's one one of those albums that sounds good any time of day, scuba as early in the morning with the birds outside your window or late at night as you relax after a long day.  No matter when you listen, this is a quite a good "book."

Fred Hersch is so busy right now with tours, teaching, and more; not only will the book and album come out in September but his "Leaves of Grass" project will be performed at Jazz at Lincoln Center (in the Appel Room) on September 15 and 16. For information, go to fredhersch.com. 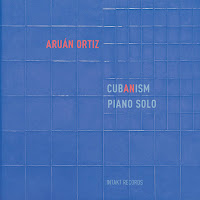 Cuban-born pianist Aruán Ortiz has become a major presence on the creative music scene over the past decade.  Not only has he toured with his own quartet and trio but he also graced the stage with artists such as Esperanza Spalding, Teri Lyne Carrington,  and Greg Osby while recording with Wallace Roney, Steve Turre, Michaël Attias, and Nasheet Waits.

One is tempted to call his latest release, "Cub(an)ism" (Intakt Records) a "rite of passage". Solo piano recordings often bring to light an artist's influences, his upbringing and vision mashed into 10 songs, an hour's worth of explorations.  It's been twenty years since Ortiz's previous solo album (unavailable in the U.S.) but, in those two decades, the experiences the pianist and composer has had through his studies and interactions gives this music its depth and scope.

Being Cuban, having been schooled in that country and then in Spain, Ortiz has a wonderful grounding in both classical (European and the Americas) as well as modern music. Simply translated, he understands the power and flow of melody as well as how to create commanding rhythms.  Start at the beginning with "Louverture Op. 1 (Chateau De Joux)" - the left hand captures our attention with its insistence. After a quick stop, the pianist rolls into a lengthy melody line built upon the percussive power of the opening.  The music tumbles forward; the music moves in and out of time yet the spell has been cast.  After you listen several times, you realize that while Ortiz is a generous player, these pieces are not filler, not technical exercises. Take the aptly-titled "Dominant Force".  The tension created by the powerful left-hand rhythm is heightened by the angular, percussive, melody. Soon, the listener is swept up in the proceedings ready to dance out of the room.  All this magic in 2:32. "Sacred Chronology" has similar intensity, built off the crashing chords that come out of the speakers in jagged time. There is not so much melody as there is rhythmic interaction, the right hand adding exclamation points as the left varies the tempo, seemingly a mixture of Messiaen and Gershwin.

The dynamism of "Monochrome (Yubá), created by the plunking two-note bass notes (the low strings sounds as if they have something on them to flatten the sound), the solemn beauty of "Coralaia" (the gentle, emotionally rich ballad that closes the album), the expansive adventure that is "Cuban Cubism" (with its harsh opening chords giving way to low bass rumbles then rising to high notes floating like light rain), all serve to show a fully engaged  artist.  Not satisfied with the tried-and-true but always pushing forward, creating a narrative of creative curiosity.  Listener, leave your expectations at the door, take part in the adventure, and you will return to this music ready to dig deeper.  "Cub(an)ism" is a high point in the career of Aruán Ortiz; one expects many, many more such triumphs.

For more information, go to www.aruan-ortiz.com.

Here's a track to whet your listening appetite:

Just last week, I wrote about Rufus Records and my earlier writing/listening experiences with musicians on the Australian label.  One of those musicians is pianist and composer Tim Stevens (pictured).  Born 200 miles north of Melbourne, the pianist moved there when he was four years and lives there still (save for a few years in Sydney).  His interactions with the piano began at age eight and, while he studied Music Performance/Improvisation in college, he earned a Graduate Degree in Education, then a Master's Degree from the School of Music at the Victorian College of the Arts (and later, a Ph. D in Philosophy). In 1994, he formed a trio with bassist Nick Haywood and drummer Allan Browne, recording two albums blending original material with jazz standards.  In 2000, Stevens moved to Sydney where he formed a Trio with Mark Lau (bass) and Simon Barker (drums). Upon his return to Melbourne in 2002, he created his current trio of bassist Ben Robertson and drummer Dave Beck, an ensemble that has released four albums on Rufus. 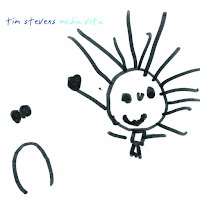 Stevens has also issued four solo piano recordings for Rufus, beginning in 2002 with the introspective yet playful "Freehand."  In May of this year, the label issued "Media Vita", an album of 12 pieces all composed in 2016, a leap year in which the composer challenged himself to write a new work every day. What should one expect from a project such as this?  Honesty, for one. Exercises such as these expose the creative person in different ways.  If he or she is up to the challenge, the realization that every day is different, that we as people are different, that this kind of "play"is also work. The intertwine of work and play is, for this writer, what makes this album so enjoyable.  Composer Stevens gives us 12 stories from 12 different days in his year as a musician, teacher, parent, citizen, etc. and, in a way, asks us if we can see ourselves in the music.


Yes, you will hear different influences, from blues to classical to liturgical works to Australian folk tunes. You will hear a technically impressive pianist who understands that one cannot substitute technique for emotion (sadness weighs heavily on a piece such as "The Wrong Door" while the previous track, "Wrested", flows with power with a sense of purpose).  There are two cuts that share the albums title, with "I" having a wistful quality and a melody that cries out for lyrics while "II", which closes the album, has a lighter feel, a sense of promise and bright days and clear nights.  In other words, hope.

"Media Vita", which translate to "half life" or, perhaps, "middle age", is by nature a culmination of the music Tim Stevens has created over the past two decades.  Yet, also by the fact that the 12 songs come from 2016, it's also "new" music, statements as to where the composer is in his life.  (Author's Note: the title is actually from the Latin phrase "Media vita in morte sumus" which translates to "In the midst of life we are in death.")

Sure, this album is personal, the best music always is. I have listened to this recording every day since it arrived a week ago and there is still more to discover, uncover, and enjoy!

For more information, go to www.timstevens.com.au.

Here's another track for your listening pleasure: