There are times when this blog slows down because of school or family visits but rarely a week goes by when I do not post a review or a notable gig happening in Connecticut.  But, I must step aside for what could be as long as two weeks. Lord knows, I have lots to review but.....So the plan is to upload videos and audio from artists with new albums and more -  just no reviews.

We open with a live video featuring the Vadim Neselovskyi Trio.  Vadim's on piano, Dan Loomis on bass, and Ronen Itzik on drums and this was recorded in Bremen, Germany, exactly two weeks before the Trio appeared at The Side Door Jazz Club in Old Lyme, CT. I was there for the later gig and the musicianship blew me away!  So, watch the Trio having so much fun and make sure to turn up the volume.


Music Mountain in Lakeville, CT, has booked a fascinating summer of creative music for its "Twilight Concerts" series. On Saturday August 5, multi-reed artist and composer Ben Kono brings his Quintet to the lovely hall on the mountain. Kono, who plays in multiple ensembles and Broadway "pits", has been working on a work titled "Don't Blink" for the past several years (thanks to commissions from Chamber Music America and the Doris Duke Charitable Foundation.  Not sure who is in the Quintet for this gig but here's a live take from 2014 with band that features Pete McCann (guitar), Mike Holober (piano), Kermit Driscoll (bass), and Satoshi Takeishi (drums and percussion).


For more information about the live show, go to musicmoutain.org.  To learn more about Mr. Kono, go to www.benkono.com.

Here's the opening track from saxophonist Ralph Bowen's new self-titled disk on Posi-Tone Records. Besides Bowen blowing hard on tenor saxophone, the band features Jim Ridl (piano), Kenny Davis (drums), and the rollicking drum work of Cliff Almond (especially on the track below). The album includes six-song "Phylogeny Suite" that has songs titled "A Rookery of Ravens", "A Venue of Vultures", and so forth (you'll need to look up "phylogeny").  The track below is not part of the suite but an invitation to and preview of the great sounds to come.

For more information, go to www.ralphbowen.com. 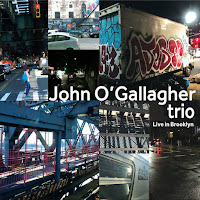 Here's a track from alto saxophonist John O'Gallagher, bassist Johannes Weidenmuller, and drummer Mark Ferber.  Whirlwind Recordings released "John O'Gallagher Trio: Live In Brooklyn" earlier this year (actually, late December 2016) and, somehow, it got buried under a pile of others recordings and student papers (excuses, excuses) - a review is forthcoming but here's a taste of what to expect from this exciting group.  Pay attention to fascinating interactions and powerful playing from all three.

For more information, go to www.johnogallagher.com.