A Friend in Need, Indeed

Growing up in the mid-1960s, I was swept away by the British Invasion, the musical of The Beatles, The Rolling Stones, Pretty Things, Peter Green's Fleetwood Mac, John Mayall, Eric Clapton, Jimi Hendrix (ironically an American who went to England and became a star), Stevie Winwood, and so on.  The ironic part, of course, is that these musicians were inspired by Black artists such as Muddy Waters, Howlin' Wolf, Smoky Robinson, Eddie Boyd, Sonny Boy Williamson I and II, Bo Diddley, Chuck Berry and so many more.  With the exception of Messrs. Robinson and Berry, few of those artists made the "pop" charts and most were working outside of music when the British enthusiasts started shouting their respect on 45s and Lps. 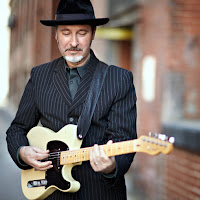 All through our high school years, Peter Parcek (pictured left) and I listened to a lot of music together.  He lived across the street and there were days we would spend holed up in his room listening to records, he following on guitar and me fumbling around on harmonica.  It was Peter who egged me on, telling me to slow down Paul Butterfield and Little Walter albums to figure what those harmonica geniuses were playing.  Took me a while but I became somewhat fluent, enough so that my playing was not embarrassing and could do alright.  Peter never stopped practicing, working in different groups, playing with great speed and dexterity but also a growing understanding of the "soul fires" one can wring out of a guitar. 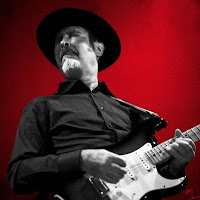 As the years went by, most of our friends went off to school, got jobs that unrelated to music, and stopped playing.  Peter stuck to guitar, moved to Great Britain and came back some time later playing better and faster than ever.  Slowly but surely, he built a career as a musician, as a sideman/leader with pianist Pinetop Perkins, living in the Boston, MA area.  He sold instruments, worked as a school counselor, but always played, always with a vision to have his own band.

Though he did not record his debut as a bandleader until 2010, Peter had a built a solid reputation in clubs throughout New England and elsewhere.  His 2011 EP, "Pledging My Time", is a tribute to Bob Dylan with three songs from the 1960s plus "Beyond Here Lies Nothin'", a blues Dylan recorded in 2009 with lyrics by Robert Hunter.

Now, Peter Parcek is working on a new recording, one that finds him in the company of Luther Dickinson (North Mississippi Allstars) and the legendary keyboard man Spooner Oldham.  He is conducting an Indiegogo campaign to finance the finishing of the project.  Check out his story and music at www.peterparcekband.com.