In September of 1963, Duke Ellington and his Orchestra began a State Department of the Middle East, Turkey, India, and various other cities and countries in the region.  When President John F. Kennedy was assassinated on November 22 of that year, the tour was abruptly cancelled and the large ensemble returned home.  Yet, Elington and his musical partner Billy Strayhorn began composing music inspired by the journey.  It was December 19th, 1966 that the band entered the RCA Victor studios in New York City to record the nine tracks that made up the oddly-titled "The Far East Suite" released in June 1967, just a few weeks after Strayhorn passed away from cancer. 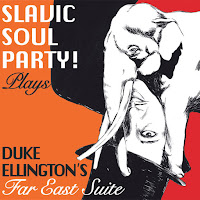 Nearly five decades later, the Balkan Brass jazz band known as Slavic Soul Party! decided to perform the Suite in its entirety. In July of 2016, the band released "Slavic Soul Party! Plays Duke Ellington's Far East Suite" (Ropeadope Records) - the nonet, composed of John Carlson and Kenny Warren (trumpets), Matt Musselman and Tim Vaughn (trombones), Ron Caswell (tuba), Peter Hess (saxophones, clarinet), Peter Stan (accordion), Chris Stromquist (snare, percussion) and leader Matt Moran (tapan, goč, bubanj - all hand-held drums) - plays the program in the order of the original album.  One of the joys of the works of Ellington and Strayhorn (especially from the 1940s forward) is how adaptable much of it is.  Slavic Soul Party makes sure you hear all the great melodies and then put its signature percussive fire under the music.  "Tourist Point of View" rushes out of the gates at top speed, Moran and Stromquist pushing the rest of the band to play with great fire.  Kudos to Caswell's tuba work as he is impressive throughout.  With five brass and only one reed player, accordionist (well, that's an instrument with reeds!) Stan is an important voice providing depth  and flair. The funky take of "Bluebird of Delhi" (imagine James Brown letting his band loose) has great work from Hess (on clarinet)  on a smart arrangement by Moran.

Thanks to the work of trumpeter Carlson, there's a drunken swagger to "Ifashan" while Hess's baritone plays sweetly on "Agra" while the band staggers just a bit (on purpose) before hitting its stride halfway through. "Mount Harissa" opens with a fine trumpet (Warren?) reading of the melody (listen for Caswell's sustained low notes) - after a short unaccompanied trumpet statement, the band kicks into a raucous dance beat and the trumpeter continues forward.  Even more of a party is the high-energy performance of "Blue Pepper"; you can just see the Brass band dancing through the streets. Stan gets the spotlight on "Amad" with an opening solo that goes from an imitation of a a steam train to high-intensity lines interspersed with drones. When the rest of the band kicks in, the trombones blare, the trumpets blast, the tuba lays down a hardy beat, the drums pound away (Hess, on alto, joins the trumpets on the melody) and the piece flies along. Watch for the interchange of brass and reeds with the accordion na minute before the "Bali Hai" finish.

Duke Ellington purists might be scared away but this rendition of "Far East Suite" is full of spice and fire. It is impossible to sit still through the up-tempo songs and even the ballads have a touch of spunk. Somehow, I missed reviewing the "Slavic Soul Party Plays Duke Ellington's Far East Suite" upon its release late last summer.  If you have yet to discover this delightful album, check it out.  It's pure joy! 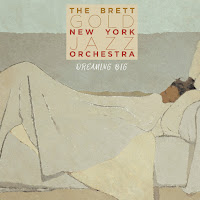 Composer and arranger Brett Gold took a long route to creating his New York Jazz Orchestra and recording his self-releaseddebut album "Dreaming Big." Though he had played trombone through high school, his double-major in college was History and Film Studies.  Gold then earned his law degrees, concentrating on international and corporate tax law.  He continued working but started his return to music in the 1990s and then, in 2004, began studying with the album producer Pete McGuiness and David Berger (among others) and soon became involved with the BMI Jazz Composers  Workshop where he was mentored by Jim McNeely, Mike Holober, and Mike Abene.  Over his time there, he developed the compositions and arrangements heard on his album. 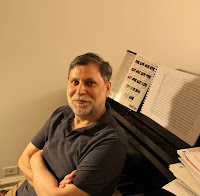 A glance at the personnel and you'll see members of the Maria Schneider Orchestra, the Pete McGuinness Jazz Orchestra, and the Tony Kadleck Big Band.  As one might expect from a debut, the composer shows his comfort in wiring for different styles but, to his credit, the album never becomes a simple "blowing session." Only one of the 11 tracks has more than two soloists and five have just one.  That leads one to believe that Gold wrote for specific players in the manner of Duke Ellington, Bob Brookmeyer, Gil Evans, Ms. Schneider, and several others. Perhaps the best part of this album is that, even though the program runs nearly 72 minutes, the music is always involving, with melodies that capture your mind and heart, emotionally rich solos, and, on several tracks, great forward motion. 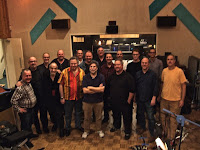 That "forward motion" is quite evident on the opener, "Pumpkinhead, P.I."  Yes, there's a bit of stop-and-start but the band really romps under the hardy tenor solo of Charles Pillow.  There are also several tracks that exude joy. "Lullaby for Lily" was composed shortly after the arrival of the composer's daughter.  After a high-stepping opening, the music slows for a sweet soprano sax solo from Mark Vinci who later trades lies with trumpeter Scott Wendholt.  Whereas "Stella's Waltz" was composed to honor the marriage of Gold's father and stepmother.  One can see the couple whirling around the floor dancing to the sweet melody as it passes from section to section. William Shakespeare devotees will be pleased to see the song title "Exit, Pursued By A Bear" as it was one of the few stage directions the Bard ever wrote. The subtitle, "Slow Drag Blues", could be the real title as the song is a vehicle for a jocular trombone solo from Bruce Eidem and a short, sweet Phil Palombi bass solo.  Pay attention to how the various musicians also have a playful role, especially the flutes, bass clarinet, and bass trombone right at the end.

Two of the pieces have a connection to the Middle East.  "Al-Andalus" (which refers to Spain during the Muslim rule from the eighth Century until 1492) bounces along on a beat that has the feel of Gil Evans-Miles Davis and "Sketches of Spain".  Kudos to trumpeter Jon Owens for a great and wide-ranging solo.  The final track on the album, "Nakba", is the longest (11:30) and the most political. The word is Arabic  and translate to "catastrophe" is the term that Arabs use to describe the 1948 war after the partition of Palestine created the state of Israel.  The "voice" of the song is Tim Ries on soprano sax  but pay attention to the great work of the various sections. The flowing melodies  from the reeds, the intense rhythm work, the sharp sound of the brass (and occasional "air-raid" warnings), the occasional "alarm-like" sounds from the piano, all that and more draws the listener into the conflict in and outside of the music. Powerful music, indeed.

"Dreaming Big" is certainly the modus operandi for composer and arranger Brett Gold.  He's put his heart, soul, money, brains, creativity, and more into this project; this is music that deserves to be heard. Lord knows if this is a band that will ever tour but, if they do, I would not hesitate to buy a ticket.

For more information, go to www.brettgoldnyjo.com.