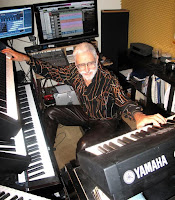 Pianist Denny Zeitlin first played with drummer and percussionist George Marsh in the late 1960s.  When Dr. Zeitlin (he's also a Clinical Professor of Psychiatry, a practicing psychiatrist, and an oenophile) was commissioned to write the film score for the 1978 remake of "Invasion of the Body Snatchers", not only was Marsh involved but the composer was able to employ synthesizers to help create mood. Dr. Zeitlin went back to acoustic music for several decades while Marsh made his name as a session player and played with numerous groups.  But the pianist never lost his curiosity for the myriad that electronic instruments could generate and, by the turn of the 21st Century, was beginning to explore their use once more. Sunnyside released "Both/And" in 2013, a solo excursion on which synthesizers played a major role.  He reunited with the drummer that same year and they soon began experimenting together in Dr. Zeitlin's home studio. 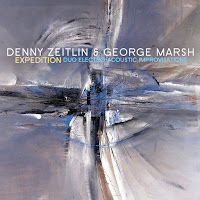 In the studio, they would set up back-to-back and just begin playing.  Every session was recorded and when the keyboardist went back to listen, he had a lot of fine interactions.  So much so, that Sunnyside released "Riding The Moment" in 2015.  Now, the label has issued "Expedition" and it's even more fascinating and exploratory than the duo's debut.  My initial reaction, especially when the duo falls into a slinky groove, is to compare this music to the work of the late Joe Zawinul, especially from Weather Report's third album (1973's "Sweetnighter") forward.  Both keyboard masters have the ability to play such slinky grooves but, if anything, the good Doctor has a more melodic approach.  The way he mixes the acoustic piano with the synths on "Thorns of Life" is so attractive, the sonic colors so vivid.  Listen to how the duo pulls away from the abstract opening of "Traffic" and falls into a delightful groove (courtesy of the drums and the deep bass notes from the pianist's left hand). 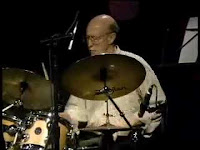 The ethereal voices that move in and out of "Spiral Nebula" give the piece (also with thanks to the title) the feel of soundtrack music from "Star Trek" or some other "space" movie.  Yet, there is a lovely vulnerable moment when it's just acoustic piano and drums; the interaction is emotionally rich, the music compelling.  "Shooting the Rapids" is an high-energy romp powered by Marsh's deep groove. Do they ever play!  "Not Lost In The Shuffle" does have a hint of blues in the drums and low keyboard notes yet notice how the trance-like keyboards support Marsh's powerful solo.

By the time you reach the last track, the title cut, you've been on quite an "Expedition."  Denny Zeitlin sees his role as not only the writing the melodies but also orchestrating them.  He has quite an orchestra at his fingertips, managing to veer away from the desire to fill every second with sound. George Marsh is not just the "rhythm section"; he, too, has a melodic side yet he often keeps the music "grounded", allowing the pianist to explore so many different paths. Listen to how the duo enters into "One Song", with the acoustic piano supported by the drums and keyboard bass.  It's a pretty piece, smart brush work, quiet background "strings", slowly adding different keyboards but never losing touch with the ballad heart of the music.  What makes this album and its pastiche of sounds, noises, and melodies so impressive is that the music is always accessible, always intelligent.  You should go on this trip; it's not "novelty" music but the adventures of two musicians who have always pushed beyond the mundane, the tried and true, into the heart of creative music.

On Saturday July 29, the Music Mountain Twilight Series, held at the historic concert hall in Lakeville, CT, presents the Alan Ferber Nonet in concert at 6:30 p.m. Trombonist and composer Ferber organized the Nonet in the early 2000s and the ensemble's first recording came out on Fresh Sounds New Talent in 2005. They have since released three albums, the latest being 2016's "Roots and Transitions" (Sunnyside).  Ferber, one of the busiest musicians on the planet, also has issued one big band CD and has another coming later this year.

For this weekend's show, the Nonet will consist of Ferber, Scott Wendholt (trumpet), Jon Gordon (alto sax), Jason Rigby (tenor sax), Charles Pillow (bass clarinet), Kris Davis (piano), Nate Radley (guitar), Matt Pavolka (bass), and Jared Shonig (drums).  The music they make defies categorization (most people would call it jazz) and Ferber's melodies are so impressive, his arrangements so intelligent, and one can hear so many possible influences, from Sondheim to Brookmeyer to Gil Evans and beyond.

Here's a track from the Nonet's latest CD: 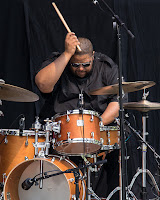 Also this Saturday, Real Art Ways, 45 Arbor Street in Hartford presents the Tyshawn Sorey Septet in a free concert at 7:30 p.m. The drummer, composer, trombonist, pianist, and soon-to-be Professor of Music at Wesleyan University keeps a busy international schedule. He's got a new Trio album coming out August 4 on Pi Recordings - "Verisimilitude" features the fine pianist Corey Smythe and bassist Chris Tordini working their way through Sorey's fascinating, minimalist compositions.  For the Hartford concert, the Sextet will be composed of Stephen Haynes (trumpet), Ben Gerstein (trombone), Todd Neufield (guitar) plus three acoustic bassists, Mark Helias, Joe Morris, and Carl Testa.  The music is based on Zen Buddhist practices and the composer's fascination with low and slow sounds.  For more information, go to www.realartways.org  or call 860-232-1006.
Posted by Richard B. Kamins at 5:43 PM