Sounds of Gratitude, Strength, and Wonder 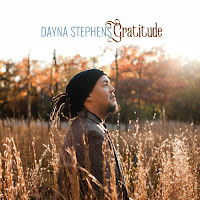 There are a number of very good reasons that the new album by saxophonist Dayna Stephens is titled "Gratitude". First and foremost, he is finally over the worst of the effects of Focal Segmental Glomerulosclerosis (FSG), a kidney disease that has affected him for the past two decades. Thanks to a donation from his aunt Lauren Annette Bullock (a performing artist based in California), Stephens is back in good health. Also, the album is the first to be issued on his own label, Contagious Music.

In many ways, the album is a continuation of 2014's "Peace" (Sunnyside) in that it is produced by Matt Pierson, features the same musicians (pianist Brad Mehldau, bassist Larry Grenadier, guitarist Julian Lage, and drummer Eric Harland), recorded (mostly) in the same studio in Rhineback, NY, and the material leans heavily in the direction of ballads.  This time, however, the songs are composed by Stephens contemporaries with the exception of Billy Strayhorn's "Isfahan."


The album opens with "Emilie", a lovely piece from Olivier Manchon, with a sweet melody first introduced by piano and tenor saxophone (Stephens also plays baritone sax, EWI Wind synthesizer, and synth bass on the album).  The music skitters along on the dance of the rhythm section with the leader rising above them with long, flowing, lines.  "In A Garden", from pianist Aaron Parks, is next. This is such a gracious ballad, the quiet guitar chords and spare accompaniment frame a lovely melody that Stephens takes his time to work through.  First solo is from Grenadier and is a reminder of how melodic a player he can be.

There are moments throughout the album that are reminiscent of the recent work by Charles Lloyd (the gentleness of the tenor playing) yet Stephens is certainly his own person. On Pat Metheny's Impressionistic ballad "We Had a Sister", he utilizes the EWI for the melody and solo before Mehldaus splendid solo.  The Wind Synthesizer often sounds harsh but here paints a lovely and emotional portrait. The use of baritone saxophone on "Isfahan" is inspired.  With only guitar and bass as support, Stephens gives the Strayhorn ballad from Ellington's "Far East Suite" a jaunty but not overdone feel.  There is a pleasing "Americana" feel to Lage's "Woodside Waltz" (Mehldau plays "tack" piano) and the leader plays a sweet solo. Electronics play an important part on the last track, two different songs titled "Clouds" (the first from Massimo Biolcati, the second from Louis Cole) - the synthesizer dances alongside Harland's excellent drum work as the tenor sax plays the melodies.  As the piece moves forward into the section composed by Cole, the tenor pairs with the EWI to play the plaintive melody.  It's an effective and gentle way to close out the program.


Stephens original composition "The Gratitude of Timbre" is a lovely ballad, the only original piece on this album (unlike the previous recording, which had none). Notice how the band (minus Mehldau) pushes the piece forward, pointing ahead to a future with such possibilities and excitement.  Dayna Stephens has never shied away from a challenge, performing and teaching even as he constantly needed dialysis. "Gratitude" is a "thank-you note" to all those who supported him mentally and fiscally, to the many musicians who he has worked and played with, and to the power of music and faith.

For more information, go to daynastephens.net. 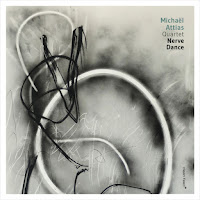 One often feels the need to put labels on music, especially to "understand" the intentions of the composer and performers.  If you take a close look at "Nerve Dance" (Clean Feed Records), the new release from the Michaël Attias Quartet, you see an ensemble makeup that has been central to jazz since the days of bebop - the leader on alto saxophone, pianist Aruán Ortiz, bassist John Hébert, and drummer Nasheet Waits - and they make music that hearkens back to the Keith Jarrett groups of the late 1970s and 80s. There is great group interactions, intelligent compositions that blur the lines between melody and improvisations, and an dynamism that has its roots both in the AACM and European "free music" scene. 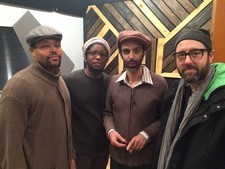 Putting labels aside for the time-being, what one hears on "Nerve Dance" is delightful and challenging interplay that speaks to the elasticity of forms.  Nasheet Waits is amazing throughout, his drumming on several tracks, including the opening "Dark Net", showing the influence of hip hop. His melodic work on "Nerve and Limbo", especially in the first half, captures an intensity that one hears in Andrew Cyrille - he is central in not only moving the piece forward but in illuminating the melody.  His rhythm section mate, John Hébert, also has a wonderful melodic side, noticeable on Attias's "Moonmouth" as well as his own "Rodger Lodger" - his counterpoint to the theme stands out and is continued throughout solos.  He also is quite a dancer as he displays his impressive moves on "Scribble Job Yin Yang", flying above the deep piano notes of Ortiz.  The pianist is a splendid accompanist. His chordal splashes on "La Pèse-Nerfs" (taking its title from the journals of Antonin Artaud) helps the piece move out into "freer" territory, echoing the cymbal splashes of Waits. Aruán Ortiz can be gentle as well. His deliberate pace as he moves through the melody of Hèbert's "Nasheet" allows the piece to grow up and out. Later on, when the music is more forceful, his interaction with the drummer is energetic yet thoughtful.

Alto saxophonist and composer Attias is a fine improvisor but also an intelligent composer and arranger.  The orchestrations on pieces such as "Moonmouth" and "La Part Maudite" gives each member of the ensemble equal weight in the sound, whether it's the piano, bass, and drums playing the melody on the latter track or how the voices move around each other on the former.  "Dream In a Mirror", at 9:51, is the longest track. Waits open the piece with a powerful solo that folds back into itself time and again before Hébert take an equally long and majestic solo. With two short taps on the cymbal, the piano enters with the drums and plays the melody alongside the bassist.  The intensity picks up with the entrance of the alto sax.  The rhythm section creates quite a storm while Attias pushes them forward with an equally power solo.

Yes, "Nerve Dance" by The Michaël Attias Quartet may only appeal to listeners who enjoy contemporary jazz but, to give this music any one label, does it a disservice. Exploratory music is better, played by an ensemble who challenge each other and themselves to avoid cliches, to play honestly and in the moment.  The band did a short tour around the release of the CD and, hopefully, you can get to hear them live. In the meantime, this album is mighty impressive.

For more information, go to www.michaelattias.com. 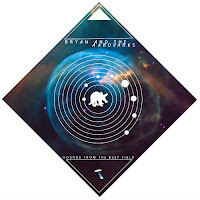 Bryan and the Aardvarks look to the heavens for "Sounds From the Deep Field", the ensemble's second album and first for Biophilia Records. It's no surprise that band in on Fabian Almazan's new and progressive label as the pianist has been in the band since its inception.  Bassist and composer Bryan Copeland leads the group which, besides Almazan (who also plays synths), features Chris Dingman (vibraphone), Jesse Lewis (guitars), and Joe Nero (drums) - on this album, they are joined by vocalist Camila Meza and Dayna Stephens (EWI Wind synthesizer). Like the other 2017 Biophilia releases, the music is only available as a download. There is an option where you can purchase the cover and the download. Click on this link to find out more. 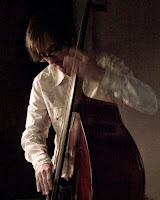 Copeland's influences for this album include the work of Carl Sagan, the explorations of NASA's satellites as they move away fromearth, and, musically, the progressive "rock" of artists such as Hatfield and The North plus progressive jazz of Tony Willams, Bill Bruford's Earthworks, Chick Corea, Jason Moran, and others. This ensemble does not imitate any of those artists mentioned but, to my ears, uses their visions to create their own.  Notice how the opening track, "Supernova", moves to power of the chords provided by Lewis and Dingman, with Ms. Meza's wordless vocals as an extra instrument, and Almazan's far-ranging solo. The "openness" of "Eagle Nebula" is created by the swirling sounds of the vibes and piano while Nero and Copeland frame the composition.  Lewis and Ms. Meza build the melody throughout the first half of the track before they drop out with the rhythm section. Dingman and Almazan move around each other, as if floating in space, until the rhythm section returns to help the piece to its rousing conclusion.  Copeland composed "Soon I'll Be Leaving This World" as an elegiac piano spotlight for Almazan; he has the first 90 seconds to himself before the drums enter, then drop out for the bass to continue to lay the foundation.  When the rest of the band enters (reminiscent of Procol Harum's "Salty Dog"), the pianist continues to lead the way with a dazzling array of long. flowing, lines that move way and back into the band. Everyone drops out and Alamazan takes the piece to its close on an ever-softening lilting melody.

Ms. Meza also sings Copeland's lyrics on several tracks.  "The Sky Turned To Grey", a song about earthly storms and how they effect us.  Lewis creates a power solo over the roiling piano chords and solo rhythms; that "powerful" sounds continues when the solo ends and the voice returns to push the song to its climax. The opening notes of the lovely ballad "Magnetic Fields" suggests Kurt Weill's "September Song"  - the lyrics are more hopeful, a search for meaning in such a vast universe. The music opens up for a fine vibes solo over a a rhythm that suggests a waltz. 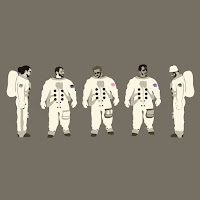 The music is not all "spacey".  Hard-edged funky drums lead the way into "Strange New Planet" (this is a tune where the "prog-rock" influence is most noticeable). Lewis and Dayna Stephens's EWI take the melody lines while Dingman offers counterpoint. The leader's powerful bass lines lock in with the drums to keep the song "rocking". There's an even harder "reprise" of the track, the short "LV 426" several tracks later.  Despite the title of the album's final track, "To Gaze Out The Cupola Module", the piece jumps right out of the speakers, powered by Nero's "smashing" drums. Almazan's electronic keyboard shares the solo space with the vibes, trading off phrases as the song rockets forward.

"Sounds From the Deep Field" has many glorious moments for listeners to bathe in.  Whether it's Fabian Almazan's powerful piano playing, Chris Dingman's supportive, melodic, trance-like vibraphone, Jesse Lewis's arching guitar lines, Camila Meza's earthy yet dignified vocals, the strong support and drive of drummer Joe Nero, plus the leader's foundational work (listen to how his high notes still manage to underpin "Tiny Skull Sized Kingdom"), this music captures one's imagination.  Would it work so well without the beautiful artwork, the views of the heavens taken by NASA's Hubble Telescope team, or the words of Carl Sagan?  They certainly help but it's Bryan Copeland's vision for this music that leads the way and it's an entrancing way to follow.

For more information, go to bryanandtheaardvarks.com.

Join the band and Ms. Meza on a track from the recording: