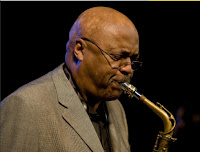 If one takes a close look at the ongoing career of saxophonist, composer, and activist Oliver Lake (pictured left), you'll see a person dedicated to not only celebrating the past but also always moving relentlessly ahead.  Coming out of St. Louis, MO, in the 1960s, a co-founding member of the BAG (Black Artists Group), he teamed up with Julius Hemphill, Hamiet Bluiett, and David Murray to form the World Saxophone Quartet, all the while touring and recording with his own ensembles.  Like Wadada Leo Smith, Anthony Braxton, Henry Threadgill, and other of his contemporaries, he developed a sound on his chosen instrument - alto saxophone - that immediately tells who he is upon the first notes.  His recorded output includes duos, trios, quartets, organ-based ensembles, steel pan groups, big band, and numerous releases with the collective Trio 3 (with Andrew Cyrille and Reggie Workman, an association well into its third decade).  Lake works with the trio Tarbaby (Orrin Evans, Nasheet Waits, and Eric Revis) and as a guest artist with other groups. 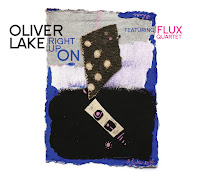 "Right Up On" (Passin' Thru Records) is his first recording with a string quartet but not his first with strings; he appeared in duo with violinist Leroy Jenkins (1932 - 2007), augmented his "working" quartet with a string quartet on 1979's "Shine!" (Arista-Novus), and released an album in 1997 "Movement, Turns, and Switches" with the Oliver Lake String Project.  This new album features FLUX Quartet (violinist Tom Chiu, violinist Conrad Harris, violist Max Mandel, and cellist Felix Fan), who Lake has worked with since 2002 and for whom he composed the majority of the pieces on the recording.  Like much of the composer's works, the 9 compositions have written and improvised sections plus the use of graphics and minimal notation.

The music certainly has a contemporary feel but hearkens back to the late quartets of Beethoven and to the string writing of Olivier Messiaen, Aaron Copland, Roy Harris, and George Walker.  The lovely sonorities of the title track, the twists-and-turns of "2016" (the pizzicato opening with its stormy feel that opens to a lovely pastoral melody that branches into several other directions, and the fascinating use of dynamic variations on "Sponge" (near silence to keening sounds to percussive effects and a surprising vocal interjection) illustrates how Lake pushes the musicians and challenges the audience.  The composer adds his saxophone voice to two tracks. On "Hey Now Hey", he joins the Quartet 1/3rd of the way playfully interacting by pushing his way into the conversation whereas on "5 Sisters" (dedicated to the memory of his mother and her four sisters), the alto leads the way. Listen closely to how the strings respond to the reed sounds and melody lines, to the improvisation, to how the cello adds such depth to the music, and to how the piece ends unresolved (to these ears). 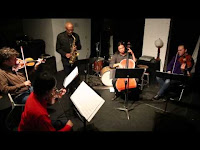 The final track, "Einstein 100!", comes from 2005 and, of course, plays with space and time, with the finite and infinite, with solos and improvisations, and contains moments of delightful counterpoint. It is important to note here that Albert Einstein was an accomplished amateur violinist, often reaching for his instrument in moments if stressful research.  Nearly 21 minutes long, the music is dramatic, cathartic, sometimes soothing, occasionally puzzling (why the coughing?), but always searching, probing, looking inward and outward, and never settling for cliche.

Oliver Lake has been a creative force for over five decades and shows no inclination to stop pushing forward.  In FLUX Quartet, he has found musicians as daring as he, as willing to go deep into music and out on a limb as he continues to do.  Pay attention to"Right Up On"; even as the music challenges your expectations, it will also take you many places.

Here is Oliver Lake with FLUX in concert: