A Way From Home 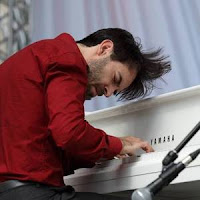 Pianist and composer Vadim Neselovskyi left his native Ukraine at the age of 16 and moved to Germany with his family. After attending schools there, he came to the United States to study at the Berklee College of Music and now serves on the faculty of the Boston-based school. His debut album, "Spring Song", was issued in 2007, the music performed by a sextet including two vocalists.  In 2013, Sunnyside Records issued "Music for September", a solo album produced by Fred Hersch featuring songs inspired by classical music, Keith Jarrett, and interpretations of several well-known standards.

In 2014, Neselovskyi formed a trio with Israeli-born drummer Ronen Itzik and the American bassist Dan Loomis (a charter member of Wee Trio).  They headed off to Ukraine for a jazz festival and as they were about to take the stage, the organizers of the festival told Neselovskyi's ensemble that a Ukrainian military plane had been shot from the sky by a missile launched by a separatist group (one of several terrorist attacks that took place that year.)  The musicians were asked to keep the music appropriate for the tragic events. 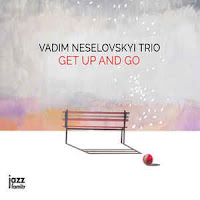 That concert was the genesis of "Get Up And Go" (Jazz Family/Blu Jazz Productions), the debut album of the Vadim Neselovskyi Trio.   The group is coming to The Side Door Jazz Club in Old Lyme CT this Friday night (5/19) to not only play the music from the album but also new material inspired by the group's travels around the United States, Europe, and beyond.  While music of the music is a reflection on the events around the festival, there are also a number of uplifting songs, pieces such "San Felio" and "Who Is It" that surge forward on the power of Neselovskyi's dashing piano lines, Loomis's thick bass lines, and Itzik's dancing drums. The former piece has several tempo changes, a well-placed laugh, and wonderful melodic turns-of-phrase. The latter tune is similar, opening on a raucous rhythmic surge before the trio digs in, interacting, teasing out melodies, plus a powerful piano solo. The title track is an exhortation, a reminder that even in sorrow, life goes on.  The music starts slowly,  prayer-like, before moving forward on the power of the rippling piano and the forceful drum work of Itzik.

The program also includes the powerful ballad "Krai', an original the pianist recorded for a 2014 recording, a duo with horn player Arkady Schilkloper.  It's the first song Neselovskyi played at that festival, a solo work with a wide range of emotions, from anger to wonder to pride. "Krai" means "region" in pre-Revolutionary Russia and "administrative territory" since.  For the pianist, I can speculate that it also means "home" or, at least, serves as a reminder of his native land. Another lovely ballad is "Winter", the opening notes falling like gentle snow until Loomis's arco bass lines read the melody. The expansive piano solo rarely rises above a whisper yet is filled a sense of wonder and contemplation.

Vocalist Sara Serpa joins the Trio on two songs, the handsome "Station Taiga" (named for a stop on the Trans-Siberian railway) and the album closer "Almost December." While she does not sing any words, her haunting voice joins with the piano and bass on the latter track to create an impressionistic portrait of early winter.  Notice how melodic Loomis is when he's interacting with the other musicians and take delight in the lovely addition (halfway through) of glockenspiel to the song.  One of my favorite moments on the recording occurs on "Station Taiga" when Neslelovskyi matches Ms. Serpa's vocal with his melodica, then moves away in counterpoint to the blowed bass, voice, and piano.

"Get Up and Go" is an impressive collection of songs, heart-felt, exciting, highly melodic yet, at times, also quite rhythmical. Vadim Neselovskyi is a mature composer, a splendid pianist, and impressive soloist. But, this music is about heart more than technique, soul more than exquisite execution.  In a world of multitudinous piano trios, the Vadim Neselovskyi Trio is well worth your attention.