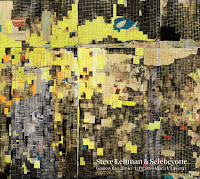 Any new album from saxophonist and composer Steve Lehman is a major event. His latest effort is titled "Steve Lehman & Sélébéyone" (Pi Recordings) and is credited to the saxophonist as well as to rappers Gaston Bandimic (Wolof), HPrizm (English) and soprano saxophonist Maciek Lasserre.  The nine tracks feature rapping in English and Wolof, the official language of Senegal, The Gambia, and Mauritania, all part of sub-Saharan Africa.  As sung/rapped by Bandimic, the words have a tremendous percussive feel. HPrizm, a founding member of the Anti-Pop Consortium, is also a strong rapper.  Powered by the rhythm section of Drew Gress (acoustic bass) and the brilliant drummer Damión Reid plus the keyboard and piano work of Carlos Homs who has worked with drummers Bernard "Pretty" Purdie and Jim Black and saxophonist/clarinetist Michael Moore, the music fires on all cylinders.

Five of the tracks are composed, sequenced, and produced by Lehman while Lasserre does the same for four others.  Because I like to know what the words are, I recommend you go to www.stevelehman.com/selebeyone and check them out (the Wolof verses are translated into English).  But, do pay attention to the music, to the burbling keyboards, to the solid bass lines, to powerful streams of phrases from Lehman's alto sax (at times sounding like Henry Threadgill) and, especially to the fascinating work of drummer Reid. Pieces such as Lehman's "Are You In Peace" where he pushes the music forward at a torrid pace while Gress holds down the bottom and plays counterpoint as well are filled with stunning tension that reflects the lyrics.  Then, there is "Cognition" where his bass drum and snare reflect the bubbling keyboard. Lehman soars over the rhythm section, his acid-seared sound going way to Bandimic - his rap is punctuated by impressive bass work and snapping drums. Lasserre's pieces have more of a "space" edge;  on "Dualism", his soprano sax is set against Lehman's alto, the synth washes, and HPrizm and Bandimic's vocals.  "Hybrid" plays with various sound samples while the rappers push the pace.  The blend of soprano and alto saxophone shadowing the lyrics, giving the words about oppression and freedom a framework, buzzes, chatters and soars.

Sounds floating in and out of the sound spectrum, the trance-like repetition of melodic fragments, jittery rhythms, powerful raps, all make "Steve Lehman & Sélébéyone" attractive.  Jazz purists just might turn up their nose but adventurous listeners, especially younger ones, will find the album will bring them closer to the intersection of jazz and rap.  The music of Steve Lehman is a giant mixmaster, many influences thrown in the musical stewpot, boiling over at times but never less than fascinating. 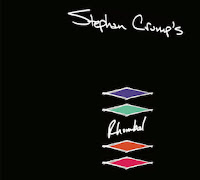 From the opening bass figure of "NoD For Nelson", the music contained on "Stephan Crump's Rhombal" (Papillon Sounds) s steeped in the blues. There are moments when the music glides over to bebop (the handsome swing of "Skippaningam") or becomes wonderfully unclassifiable (the propulsive push of "Birdwhistle" - right near the end, the tune breaks into a rhythm similar to Lou Reed's "Walk on The Wild Side" while ) but you will listen to this album for the impressive interactions of Crump (bass and compositions), Tyshawn Sorey (drums), Ellery Eskelin (tenor saxophone), and Adam O'Farrill (trumpet).  Pay attention to how the solos grow out of the melodies, how the quartet mix their distinctive styles to the composer's vision of the music, and the clarity of the sound.  There's a soul music edge to "Grovi" in it's laid-back beat yet listen to the melodic bass lines under the solo phrases that move from foundational to counterpoint.  Also notice how Eskelin steps in behind O'Farrill's solo several bars before his own solo yet does not seem to butting in, just adding to the sound.

Sometimes, it seems as if we're stepping into a private conversation, as if the band was reflecting on previous events.  The deep blues of "Loose Bay" is a good example; moving at a very slow pace atop the splashing cymbals, tom-tom beats, and long bass tones, the youthful trumpeter takes a fascinating solo that often changes in volume, rising from a near-whisper to a heartfelt cry.  The saxophonist follows, drifting over the beat, slowly but surely working around the bass lines but never in an agitated state.

You'll like the funky drive of "Esquima Dream" (Sorey in a "Pretty" Purdie state of mind) and the steady shuffle of "Tschi" (with its fun switch-arounds).  Really, let the music of "Rhombal" wash over you.  Play it loud, let the rhythm section fill your ears, notice the Ornette Coleman connection in the blues feel of several tracks (and the instrumentation) and also the folky melodies of pieces such as "Pulling Pillars" (the solo bass piece before the final track, "Outro for Patty").  Take it all in, then go back and let the sounds resonate inside your mind and body.  Sometimes, the best music sounds old and new at the same time.  "Stephan Crump's Rhombal", dedicated to the bassist's late brother Patrick, is contemporary blues, "blues with a feeling."

Read what Stephan Crump has to say about the album and his collaborators by going to stephancrump.com/albums/rhombal/.

Here's the quartet live from from October 2015:

"Calma" is the opening track of "All The Dreams", the new album from Sara Serpa (vocals, piano, Fender Rhodes) and André Matos (guitars, electric bass, percussion) to be released on Sunnyside Records in mid-September.  Meaning "calm", that's a good initial reaction to the 14 tracks on the recording.  Ms. Serpa's gentle and emotionally true voice, either solo or multi-tracked (as it is on several tracks), blends so nicely with Matos's electric guitar, whether it is a folky track such as "Estado De Graça" or the mysterious "Night" (two guitars in the right speaker vying for attention).

Three cuts set poems to music, with the afore-mentioned "Night" based on a William Blake poem from "The Song Of Innocence" while the minimalist "Programa" features words from Portuguese poet Luis Amaro.   "Nada" is from the pen of Ālvaro de Campos (a heteronym of poet Fernando Pessoa; the duo bathes this poem about a person who has settled for a world with nothing with shimmering guitars and a straightforward vocal.  One other cut, "Os Outros", employs words from a 1964 essay by Brazilian writer Clarice Lispector (1920-1977).

While most of the album is composed of duo performances, mix engineer Pete Rende adds synthesizer to three tracks while Billy Mintz can be heard on drums and percussion on four cuts.  The latter musician's excellent hand drumming can be heard on haunting "Água", bubbling beneath the vocal and guitars, and quietly accenting the voice, piano, and guitars on "Lisboa".  Both he and Rende add their talents to the opening track, Mintz with the simple yet effective brushes work.

Wordless vocals are used to great effect throughout the album, from the classically-influenced "A La Montagne" to the Beatles-esque "Postlude" (kind of like "Sun King" from "Abbey Road") with its waterfall-like descending vocal lines.  Listen to Ms. Serpa's voice rise out of Rende's synth on the final track, "amlaC", not exactly a backwards version of the first cut - the track serves to bring the recording full circle and brings the dreams to a close.

Because André Matos does not take many solos but uses his guitar to paint the various backgrounds, one might overlook his contributions.  He wrote or co-wrote 11 of the 14 tracks, his guitar is the foundation and other voice in the conversations of the songs, and his lines flow as effortlessly as the vocals.  Sara Serpa understands the duo setting having recorded with pianist Ran Blake and the various vocal choirs on the recording may remind some of the work she does with the vocal quartet Mycale.  The music on "All the Dreams" is in no hurry, at times as comforting as cool summer breeze or a warm blanket on a winter night.  Warm, like calm, should be how one feels after spending time with this album - warm, calm, and, ultimately, hopeful.

For more information, go to serpamatos.com or check out the album page at the Sunnyside Zone.

Here's a lovely taste of this album: