The Fall 2016 Concert Season at Firehouse 12 begins this Friday (9/16) with an appearance by the Ben Wendel Group.  The tenor saxophonist, bassoonist, and composer may be best known for his work with Kneebody; he appeared at the Elm City venue three times including in a duet with pianist Dan Tepfer, as part of Linda Oh's Sun Pictures group, and with his friends in Kneebody.  He's a busy musician and producer - I saw him recently subbing for Donny McCaslin in Maria Schneider's Orchestra and he fit in nicely with the ensemble.

Wendell is touring on the strength of his new album (just came out last week) "What We Bring", his debut on Motéma Music after three releases on SunnySide Records.  The recording features Gerald Clayton (piano), Joe Sanders (bass), Henry Cole (drums, and, on two tracks, Nate Wood (percussion).  Clayton and Sanders will be along for the New Haven gig while Wood will man the drum set. 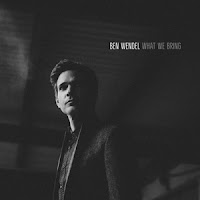 What a delight the music is on the new album. Six originals and two fascinating covers, one of Miles Davis's "Solar" (which closes the recording) and a lovely reading of "Doubt" by the duo known as Wye Oak. From the opening moments of "Amian", the quartet (and, in this instance, Wood) are firing on all cylinders.  Sanders and Cole (who is a member of Miguel Zenon's Quartet) set a throbbing rhythm while Clayton rumbles underneath.  During Wendel's solo, the pianist is silent while the tenor flies above the fray.  If you play close attention, you can hear the overdubbed reeds as well as the percussive piano.  The melody of "Fall" rises over a funky beat.  Clayton and Wendel share the melody and, at the end of the verse, they each take a quick solo turn.  Clayton takes off into a rollicking, dancing, solo - when the tenor, one hears a section that is reminiscent of Keith Jarrett's European Quartet (Jan Garbarek, Jon Christiansen, and Palle Danielson) from the 1970s.  One hears that in the opening of "Spring", in the sprightly melody line and how Clayton jumps into his solo over the active brushes and fundamental bass.

There's a hint of Caribbean rhythm on "Song Song" while the melody dances atop the bells and bouncing bass lines (acoustic bass and Clayton's left hand).  "Soli" charges out of the gate thanks to the forceful drumming yet it's quite a pleasure to hear how the four musicians vary the dynamics.  "Austin" is a such a pretty piece, the articulated piano lines and the breathy tenor create an atmosphere of gentle contemplation. Clayton is the perfect foil throughout the record, his choice of notes and chords serve the songs so well and his solos are so smart.  Because Sanders and Cole are so adept at creating the foundation for ever song, both the pianist and saxophonist are free to explore.

The splendid interpretation of "Solar" brings the album to a close on a rousing rhythm.  Just listen to how Cole pushes the piece away from its hard-bop roots and into new territory, one marked by the influence of hip hop.  "What We Bring" is modern music, celebrating the tradition as it expands its territory.  Ben Wendel has an expansive mind, attracting musicians to his vision who enjoy taking the music in unexpected and often exciting directions.  This album is a delight from start to finish.

For more information, go to motema.com/artists/ben-wendel/.

Here's the Group in action:

As luck would have it, alto saxophonist, composer, and the newly appointed Director of Jazz at Princeton University, Rudresh Mahanthappa brings his Bird Calls quintet to The Side Door Jazz Club in Old Lyme on Friday night, performing his first set at the same time as Ben Wendel will be playing in New Haven.  Joining him will be three of the four musicians who recorded the 2015 ACT CD that gives the band its name; they include pianist Matt Mitchell, bassist François Moutin, and the impressive young trumpeter Adam O'Farrill.  Replacing drummer Rudy Royston will be Dan Weiss so there will be no loss in the powerful drive that propelled the band on the album.  The music, based on the leader's study of the music of alto saxophonist Charlie "Yardbird" Parker (the subtitle of the CD is "The Charlie Parker Project"), does not sound like it comes from the 1940s or 50s but has a modern sensibility. Parker always created new songs off the chords of older ones (he loved "I Got Rhythm" for example) and Mahanthappa does the same.  It's a smart approach, filled with great melodies and strong solos - this is quite a band.

Doors open at 7:30 p.m. and the first notes should resound at 8:30.  For tickets and more information, go to thesidedoorjazz.com or call 860-434-0886.  To learn more about Professor Mahanthappa, go to rudreshm.com.

Here's a short look at the album:


On Saturday night, The Side Door welcomes back the Clifton Anderson Sextet with saxophonist Antoine Roney.  The trombonist, best known for his work with his uncle, saxophonist Sonny Rollins, has always maintained a career as a leader, moreso over the past several years since his former employer has stopped playing concerts.

The music starts at 8:30 p.m.  Check the website for more information. 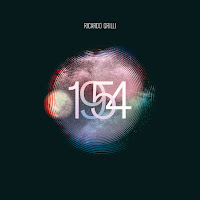 As the CDs pile up on my desk, one keeps rising to the top.  "1954" (Tone Rogue Records) is the second album for guitarist and composer Ricardo Grilli.  Grilli, a native of Sao Paulo, Brazil. moved to New York City to study at NYU in its Music and Performing Arts Department (after studying at the Berklee College of Music).  He graduated in 2013, the same year he issued his debut album, "If On A Winter's Night A Traveler" (self-issued).  He's worked with pianist Jon Cowherd, saxophonists Chris Cheek and Chris Potter, and drummer EJ Strickland.  He's a melodic streak a mile wide and it's very evident on both his albums.

The new album features an impressive band including Aaron Parks (piano), Joe Martin (bass) and Eric Harland (drums).  The guitarist has supplied with nine originals pieces and, while you may hear a hint of Pat Metheny and Kurt Rosenwinkel every now and then, these compositions are mature, thoughtful, and filled with wonderful melodies.  Several of the cuts sound as if there should be a vocalist.  Pieces such as "Rings" and the elegant samba "Breathe"  are telling a story, one that the listener can get wrapped in. Gentle chords and simple yet effective hand drumming leads in "Rings" - nothing is rushed, the melodic bass lines underpinning the melody played by the leader and Parks, whose phrases rise over the guitar lines and loops. "Cosmonauts" has a classical feel with Martin's sweet solo right at the beginning as the piano plays quiet figures that lead into the melody, one that is effortless and poetic in nature. Harland helps to push the melody forward with his active work while his cymbals splash easily during the piano solo.

There are also moments when the music takes a harder turn.  The opening track "Arcturus" (possibly named for the red-giant star in the Boötes constellation) has a strong 4/4 feel in Harland's drums, a pulsating drive that one might hear on a Jeff Beck track (not the guitar sound, though).  "Vertigo" features a solid drum attack yet still has a well-turned melody.  Harland keeps up the intensity during the piano solo but does not overpower Parks.  Grilli feeds off the the drummer's energy and creates a ringing solo, filled with powerful phrases that rise and fall and rise again.  There's a "prog-rock" feel to the drums on "Radiance", a tune on which the sustain of the guitar notes give the song a fuller sound.   The program closes with "Pulse", a rapid-fire tune that has a hard-bop feel, flying on the scrambling drums and "running" bass lines.  Parks digs into his solo, urged on the forceful rhythm section and chunky guitar chords.

Get a copy of "1954" (it's released in early October) and let the sounds and melodies wash over you.  Don't look for influences, just listen and you'll hear a confident musician playing with a rhythm section that supports, pushes, and gives its all.  Notice the melodies - the majority are truly intelligent, well-drawn, and not flashy guitar riffs that lead to long solos.  Ricardo Grilli, remember that name. Judging by his 2 albums, he's a fine composer, a smart player, an excellent arranger, and, chances are good, he'll be making great music for a long time.

For more information, go to www.ricardogrilli.com.