Busy week for live music and very busy week for new recordings.  Here is, at least, one event that ties performance and CD together.  Pianist and composer Kris Davis comes to New Haven this Friday to perform two sets with fellow pianist Craig Taborn in the acoustically delightful Firehouse 12, 45 Orange Street.  On the same day and on her own label, Ms. Davis releases an album of duets titled "Duopoly" (Pyroclastic Records), that features the pianist in musical conversation with not only Mr. Taborn but also Bill Frisell (guitar), Julian Lage (guitar), Angelina Sanchez (piano), Billy Drummond (drums), Marcus Gilmore (drums), Tim Berne (alto saxophone), and Don Byron (clarinet). Sharp-eyed readers will realize how important "Two" is to the project in that 1) - it's an album of duos, 2) - she plays 2 pieces with each musician, and 3) - out of the 16 tracks, there are two that are "standards."  More about that below.

This performance marks the fifth time Ms. Davis has appeared in the Elm City venue and the sixth for Mr. Taborn.  Both are intelligent improvisors, without fear, and can follow any path at the drop of a beat. All of which says they are fearless.  Both lead busy lives as band leaders - Ms. Davis with her trio as well as with Paradoxical Frog while Mr. Taborn also leads a trio - and both have impressive "sideman" credentials. 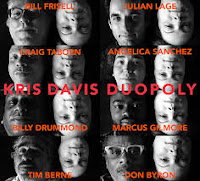 "Duopoly" is an series of conversations between the musicians.  Ms. Davis composed five of the initial duos with one each by Ms. Sanchez, Thelonious Monk, and Duke Ellington.  The other eight tracks are improvisations, each with the title of the musician the pianist is paired with and, in a circular twist (if that's possible), goes in the opposite order as the composed performances (Bill Frisell plays on track #1 and #16, Julian Lage on #2 and #15, and so on). The project pairs Ms. Davis with musicians she had played with but  never recorded with as well as with others she had, in her own words, "only admired".

The optimum approach to this music is to just sit back and listen.  As knowledgable listeners, we have expectations of each musician on this album, all of whom have recorded in groups small and large.  We cannot help but be judgmental yet the fun of the recording is not only the compositions that Ms. Davis creates for each person but also how they interact in the improvisations.  For instance, Mr. Drummond sounds just a bit tentative as they move through the opening moments of Monk's "Eronel" but he gets into the spirit of the duo by first following the pianist's lead then pushing her forward. The duo's improvisation piece builds off Ms. Davis's left hand and Drummond's increasingly powerful floor tom rhythm pattern. Marcus Gilmore gets into the spirit quicker, perhaps from his experiences with Vijay Iyer. His improvisation with the pianist has more sizzle and power, seeming too short at 3:34.  "Trip Dance For Tim" is one of the more powerful works in the program, the throbbing piano chords supporting Berne's pointillistic forays into the upper range of the alto sax.  Their "improv" features the saxophonist creating a percussive pattern on the keys of the saxophone and a breathy lead-in to his squealing, mewling, solo in a fiery interaction.

The four tracks with Ms. Sanchez and Mr. Taborn cover a lot of territory with the former's "Beneath the Leaves" featuring a stubborn melody but a flowing yet angular solo.  The quiet "improv" with the latter pianist stand out for its quiet poetry, a musical haiku in the midst of odes. "Surf Curl" combines a percussive, nervous, piano figure with the stately steel-string guitar of Lage.  As the piece continues, he plays longer lines; listen as the piano figures moves from the lower half to the upper keys, the result being Lage occasionally strumming a chord.  It's quite a treat to hear Bill Frisell in a "free-er" mode, hearkening back to his work with John Zorn and Paul Motian. Not that he goes wild but listen as he wraps his country-style riffs around the impressionistic circular piano phrase in the opening half of "Prairie Eyes" before the pianist moves into a more Americana mode.  Their improv closes the album in a dream-like collection of single-note piano fills and long guitar tones, slowly easing to a quiet close.

Kris Davis and producer David Breskin also filmed the proceedings which is included in the CD package.  Watching the musicians obviously gives you a better feel for their interactions and it's educational to observe the creative process.  "Duopoly" is an aural adventure for the mind that gives one fresh insights into the ever-expanding imagination of its creator and her compatriots.

For more information, go to krisdavis.net. 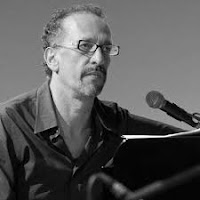 Meanwhile, The Side Door Jazz Club in Old Lyme continues its string of impressive weekends of music.  On Friday (9/30), pianist and composer Hector Martignon comes to the Shore Line venue with his band, Foreign Affair.  The Colombian-born leader has studied and recorded a number of different styles of music ranging from classical to Afro-Latin to Caribbean to Brazilian and more.  The band he's bringing include two percussionist, Mino Cinelu and Samuel Torres, both amazing players, plus bassist Rudyck Vidal and vibraphonist Christos Rafalides.

Foreign Affair takes the stage at 8:30 p.m. and will play two sets. For more information, go to thesidedoorjazz.com.  To learn more about Mr. Martignon, go to hectormartignon.wordpress.com.

October begins on Saturday night and what better way to usher in the new month than with the Jeremy Pelt New Quintet.  Pelt, a trumpeter, composer, and educator (currently on the faculty at the University of Hartford/Hartt School,) remains one of the busiest musicians on the planet (go to his website and check out the "Appearances" page. His latest High Note CD, "#Jive Culture", is a return to acoustic jazz and features legendary bassist Ron Carter as well as pianist Danny Grissett and drummer Billy Drummond.

Mr. Pelt's new band includes the splendid bassist Vicente Archer, the fine young pianist Victor Gould, percussionist Jacqueline Acevedo, and Hartford-born drummer Jonathan Barber.  One should expect that the uptempo pieces will crackle with excitement while the ballads will be emotionally strong.  For ticket information and reservations, call 860-434-0886.  To learn more about the trumpet player, go to jeremypelt.net. 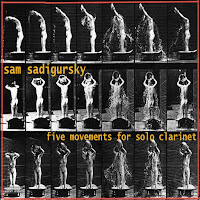 Four years ago, Sam Sadigursky created a series of compositions that the acclaimed classical clarinetist Marianne Gythfeldt recorded as "25 Etudes for Solo Clarinet, Book 1."   Issued on the reed player's Bandcamp page, the short pieces were created for advanced musicians.  (He has since produced two additional books of compositions for clarinet.)

Sadigursky, who is a member of numerous groups but most notably Darcy James Argue's Secret Society, has just issued (for download only) "Five Movements for Solo Clarinet" - this time, the composer plays his music and the five track/20-minute adventure moves from the Easter European flavored "Diasporas" with its combination of long and short tones, playful phrases mixed with series of "stops-and-goes" to the classically flavored "Short Stories" and its circular lines to the Baroque-feel of "Dance On" and its alluring melody.  There are also two pieces under 1:25.  "Express Train" is a rush of melody as is the rollicking "Jazz Hands", the latter being as close to "jump classical" (if that's a viable term) as one could get. 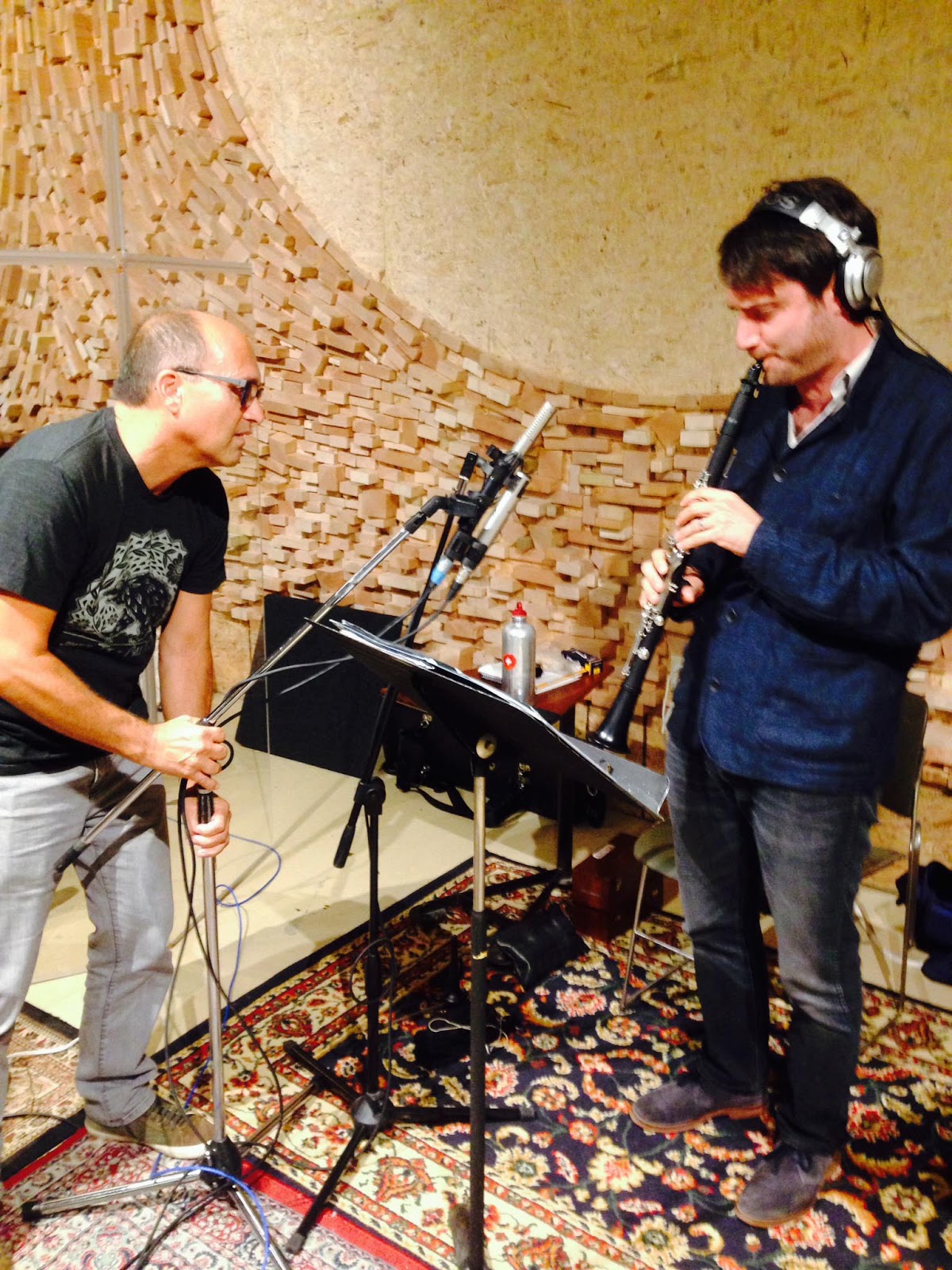 Sam Sadigursky may be best known for his various "Words Projects" plus his delightful 2015 "Follow The Stick" album but he's been seriously working on his composing for clarinet. "Five Movements for Solo Clarinet" won't cost you very much money - go to samsadigurskyclarinetetudes.bandcamp.com/album/5-movements-for-solo-clarinet to make your purchase.  Let the music play all the way through and then listen again.  There is much music, plenty of ideas and impressive melodies, in this 20-minute adventure.  This is not just for clarinet aficionados (though they should enjoy the sounds) but also for people who savor music that is bold, thoughtful, and, at times, charming.

To find out more, go to samsadigursky.com.


Guitarist and composer Gene Ess, a native of Tokyo, Japan, who is now a resident of New York City, has been an active musician for over three decades. After graduating from the Berklee College of Music, he began working with drummer Rashied Ali (with whom he recorded one album) and going on to work with bassists Lonnie Plaxico and Reggie Workman as well as with Archie Shepp. His first CD under his own name, "Sunrise Falling", was issued in 2003 on the ANP label. Since the 2005 release of "Sandbox and Sanctum", Ess has issuing his music on his own label, Simp Records. He has employed such great musicians as Donny McCaslin, Tyshawn Sorey, David Berkman, John Escreet, and vocalist Nicki Parrott. His new recording, "Absurdist Theater", is his third collaboration with vocalist and librettist Thana Alexa and second with  Clarence Penn on the drums. Rounding out the rhythm section is pianist Manuel Valera and bassist Yasushi Nakamura.  Ms. Alexa is an excellent foil for the guitar not just for her lyrics to his original composition (this album has eight) but also for her wordless vocals that wend their way through several songs.  Valera's rich solos and strong chordal backgrounds on tracks such as "Kunai" and "Out of the Ashes" really fill the sound spectrum yet leave room for Ess's flowing guitar solos.  The pianist's bell-like electric piano tones introduce "Torii" which drops into a Santana-like romp with the guitarist and vocalist on the main melody.  Both Ms. Alexa and the leader deliver powerful solos over the rampaging drums and thick electric bass lines. (see the video below). "Dejala Que Pasa" is a fascinating ballad, powerful drumming over rippling piano, synthesizer swells (played by Ess), and Ms. Alexa's lovely vocal which, despite the title, is all in English.

Among the highlights of this recording is the trio piece "Forkball (For Ornette)", which opens with just bass and drums before Penn joins during the opening statement of the theme.   The piece changes tempo several times before dropping into a brisk "walking line" for the fine solo.  The final track, "Upward and Onward", has a faster tempo and the quintet, pushed along by the splendid work of the rhythm section, concocts quite a heady brew.

"Absurdist Theater" is a fascinating recording, a continuation of the  journey that Gene Ess, his guitar, and his ensembles have been taking since he set out on his own.  It's grit, melody, swing, power, and the fine voice of Thana Alexa.  The album is a journey adventurous audiences should enjoy.

For more information, go to www.jazzgenemusic.com.