"...This Land is Our Land" Outside and In 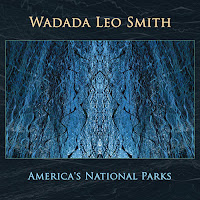 American music is filled with iconoclasts and storytellers as well as hacks and posers. Wadada Leo Smith belongs to the initial group listed above, having created some of the most fascinating music of the past 5 decades.  His trumpet sound hearkens back to Buddy Bolden and Louis Armstrong, a bright sound that often rises above his ensembles.

His latest adventure, "America's National Parks" (Cuneiform Records), is a poetic look at the United States through the land it preserves, one of its greatest rivers, a multi-national and racial port city, and an African-American musicologist who worked to preserve the "folk" music of the country. The 98-minute double album features Smith's Golden Quintet of Anthony Davis (piano), John Lindberg (bass), and its newest members, drummer Pheeroan akLaff and cellist Ashley Walters.

The program opens with "New Orleans: The National Culture Park 1718" - the date is important as that was the year the city was founded by Jean Baptiste Le Moyne de Bienvelle. akLaff's drums are quite prominent in the mix, perhaps reminding some of a funeral procession but also this serve to remind the listener of the importance of the drum in both African and African-American society.  In this piece, the drums often serve to change the mood, play counter-melody, and to push the band forward.  "Eileen Jackson Southern, 1920-2002: A Literary National Park" is dedicated to one of the pioneers of musicology (find our more by going to www.blackpast.org/aah/southern-eileen-jackson-1920-2002). The music is elegiac, quiet, muted trumpet, yet picks up in intensity as the interactions move forward.

Other compositions pay tribute to Yosemite National Park, Sequoia & Kings Canyon National Parks, YellowstoneNational Park all circa 1890 plus the 31-minute plus "The Mississippi River: Dark and Deep Dreams Flow the River - a National Memorial Park circa 5000 B.C."  The final composition is the first piece on the second disk and demands that you listen all the way through.  The opening 10+ minutes move at a pace not unlike a Morton Feldman composition;  then one hears blues phrases creep into the bass lines but the piece still has a languid tempo.  At the halfway mark, the band fall into that earlier blues line, the drums really pushing the trumpeter forward.  Several minutes later, Mr. Lindberg and Mr. Davis solo over the frenetic drumming and the pulsing cello. The group drops out for an unaccompanied cello solo and, then one by one, the other musicians return and the piece returns to the pace of the opening 1/3rd but with more intensity.

The release of "America's National Parks" coincides with the 100th anniversary of the establishment of the National Parks Systems and Wadada Leo Smith's 75th birthday (in December).  The last five years have been among the most productive and rewarding time of the trumpeter and composer's life. Like a National Park, Wadada Leo Smith is one-of-a-kind, an amazing son of the Mississippi Delta  who has created his own musical system, has celebrated his elders while creating his own lasting compositions, and who has traveled the world, collecting and synthesizing the many sounds he has heard and continues to hear.  In his own words,  this new collection of compositions and performances illustrates that "My focus is on the spiritual and psychological dimensions of the idea of setting aside reserves for common property of the American citizens: those who have passed on before, those who are here in the present, and those who will come in the future." This music celebrates people, cities, nature, rivers, canyons, and, through performances, the art it inspires.

Here's a taste of the opening track: 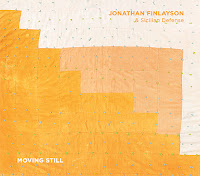 "Moving Still" (Pi Recordings) is the second album from trumpeter and composer Jonathan Finlayson & Sicilian Defense.  The quintet, named for a chess move, features guitarist Miles Okazaki, pianist Matt Mitchell (who seems to be ubiquitous at the moment), bassist John Hébert (also very busy), and drummer Craig Weinrib - only Okazaki was featured on Finlayson's 2013 debut "Moment and the Message" (also on Pi).

Finlayson, who first came to notice at the age of 17 playing in saxophonist and conceptualist Steve Coleman's ensembles at the turn of the new Millennium, is also a busy musician, working with guitarist Mary Halvorson, Steve Lehman, Muhal Richard Abrams and others.  His original music incorporates many different styles and you will go crazy looking for his influences as he has well on his way to his own "sound."

One will notice the urgency in much of these performances.  Even though the opening three tracks start with unaccompanied statements (by Okazaki, Weinrib, and Mitchell respectively), the music builds in intensity on each track, creating a palpable sense of tension.  "All of the Pieces", at 11:16 the longest track, opens the album and, initially belongs to the guitarist with the leader only playing the "head" before Okazaki steps out. He then gives way to Mitchell whose wonderful splintered melodic lines lead to a classically-inspired journey. It's not until the 5-minute mark that Finlayson takes his solo.  He builds it off the original melody (the guitarist and pianist playing counterpoint), continuing to refer to the phrases but moving away at the same time.  Pounding drums then a funky beat give "Flank and Center" its direction with its percussive melody line split between piano and trumpet while the guitar offers a counterpoint. The clarity of each instrument stands out; the throbbing, deep, bass notes, the splashing cymbals, the roiling piano, the "clicking" guitar phrases, all support a forceful trumpet solo.

The urgency of the early cuts is evident in "Cap vs. Nim" but there is a more "open" feel in the rhythm section and a more melodic approach in Mitchell's impressive piano accompaniment.  Only in the latter stages of the trumpet solo does one notice the tension has risen. "Between Moves" opens with a guitar and bass duo, Okazaki strumming and picking while Hébert solos.  Mitchell enters in support, with his bass notes setting the pace for the rest of the song.  The bowed bass and piano continue with long tones as Finlayson enters and builds upon the piano chords. His solo moves easily over the band, often referring to and musically commenting on what is being played beneath him.

The album closes with "Folk Song", the closest this program comes to a ballad.   The other track over 10 minutes (10:48 to be precise), the music unfolds from the opening trumpet melody with a gentle insistence.  Again, one can hear each member of the quintet quite clearly, the rhythm section pushing the soloists forward while Mitchell and Okazaki add commentary beneath.  The pianist's quiet single-note runs and then solid chords support the guitar solo without overshadowing his circular phrases.  After a restatement of the opening theme, Weinrib steps out over the thick low notes of both piano and bass, raising the heat in the music, bringing the album to an exciting finish.  The musicians refer to the opening melody but now there is power and fire in the quintet.

"Moving Still" is an apt title to this album, especially as the music continues to reverberate after the final note is played. With a majority of the titles referring to chess, it puts the listener on notice to listen to how the band "moves" through the music and how the music moves through and out of the quintet.  Jonathan Finlayson is more of a crafty than slick soloist while his compositions blend melody and rhythm (that's the Steve Coleman influence), interactions and solos, in the most fascinating.  This group must be great fun to watch and listen to in a club or concert setting.  In the meantime, this recording is a real treasure.