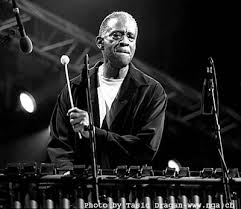 As I was writing the column below, the word of Bobby Hutcherson's passing on August 15 came to my attention.  The vibraphonist and composer first came to critical notice in the early 1960s recording on Blue Note Records with the likes of Jackie McLean (1963 on "One Step Beyond") and Eric Dolphy (1964 on "Out To Lunch").  His first album as a leader, "Dialogue", was issued in 1965 and he continued to record for the label until 1977.  Born in California in 1941, Hutcherson's initial work came after his move to New York City but the loss of his cabaret card (due to an arrest for marijuana possession) brought him back to the West Coast. 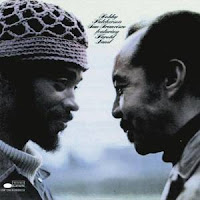 In 1969, he began a collaboration with saxophonist Harold Land (1928 - 2001) that resulted in a series of Lps that were more melodic and accessible than some of Hutcherson's earlier works (yet still appealing).  After the vibraphonist left Blue Note, he recorded for a number of labels and appeared as a guest on a host of albums (with Woody Shaw, Abbey Lincoln, Freddie Hubbard, Pharaoh Sanders, and many others).  In 2004, he was a founding member of the SF Jazz Collective, touring and recording with the group until 2007. Hutcherson was named a NEA Jazz Master in 2010. He returned to Blue Note in 2014, releasing "Enjoy The View", an album featuring saxophonist David Sanborn, organist Joey DeFrancesco, and drummer Billy Hart.

To read more about the great vibraphonist, go to ww2.kqed.org/arts/2016/08/15/bobby-hutcherson-jazz-legend-of-the-vibraphone-dies-at-75/ and  www.sfjazz.org/onthecorner/bobby-hutcherson.

Big weekend at The Side Door Jazz Club in Old Lyme as they welcome back the Black Art Jazz Collective  to celebrate the release of the sextet's debut album.  The first time that Wayne Escoffery (tenor saxophone), Jeremy Pelt (trumpet), James Burton III (trombone), Xavier Davis (piano), Vicente Archer (bass), and Johnathan Blake (drums) came to the venue back in December of 2014), they were invited to record the gig and use the performance space to record their debut album. Even better, Ken Kitchings (owner) and Jan Mullen (manager and artistic director) offered to produce the project. 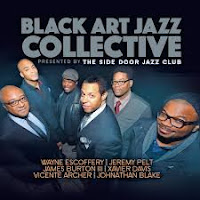 The recording, which I reviewed when it was issued in July (read that here) shows the strengths of the ensemble, e.g. good songwriting, an impressive rhythm section, strong soloists, and smart interactions.  Now, the sextet comes back and will bring the music to life in the place where it was first born. Best of all, they'll be at The Side Door both Friday and Saturday nights, playing music from the CD and trying out new songs.

Pianist and vocalist Warren Byrd and his partner, trumpeter and vocalist Saskia Laroo, were in Europe when the apartment they live in in Hartford suffered fire damage as well as being looted in the aftermath.  Yet, they persevere as they pick up the pieces, finding joy in performing with the Afro Semitic Experience as well as on their own.  Warren, Saskia, and the Byrdspeaks Ensemble perform this Saturday (Aug. 20) at 7 p.m. in Passages Gallery, 509 Farmington Avenue in Hartford.  Joining the duo onstage will be Mixashawn (saxophones, vocals), Stephen "King" Porter (bass), and George Mastrogiannis (drums). Byrd is a splendid pianist who can play just about any style plus he's got quite a voice so expect the eclectic.  For more information, call 860-523-3232.