Monday In The Park with Noah & Dave

Earlier this year, saxophonist and CT native Noah Preminger released "Dark Is The Night, Cold Is The Ground", a collection of blues songs recorded at The Side Door Jazz Club in Old Lyme with his regular quartet of Jason Palmer (trumpet), Kim Cass (bass) and Ian Froman (drums).  Reminiscent, at times, of the blues-based sound of Ornette Coleman's band early in his career at Atlantic Records, Preminger and company dig deep into the original melodies and make them their own. They pay proper respect to the melodies and the go in fascinating directions.  The impressive work of the rhythm section and the talented front line earned many rave reviews.

This coming Monday evening (8/08), Messrs. Preminger, Cass, and Froman are the headlining act in the penultimate concert in the Paul Brown Monday Night Jazz in Bushnell Park 2016 series.  Mr. Palmer is in Banff Alberta Canada teaching in the Banff International Workshop in Jazz & Creative all next week so Dave Douglas will be playing with the quartet - not too shabby, eh?

Opening the show at 6 p.m. will be Jeff Fuller & Friends.  Based in New Haven and a graduate of Yale, bassist Fuller always has a busy schedule.  Through his career, he has worked with many of the best artists on the East Coast including Paquito D'Rivera and the late Hilton Ruiz. He currently is co-leader of Sambaleeza and teaches at the ACES-Educational Center for the Arts in New Haven. 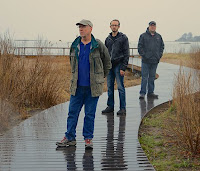 He's just released a new CD, "Shoreline Blues", featuring Darren Litzie (piano) and Ben Belillo (drums); those two men will join him on the Bushnell Park stage playing material off the new record and more. The recording is mostly originals with some Charlie Parker and Sonny Rollins tunes for good measures.  To find more about the bassist and the CD, go to www.jefffuller.net.

To find out more about Monday nights, go to www.hartfordjazzsociety.com.  As for Noah P, go to www.noahpreminger.com.

Here is the title track of the latest album:

And the title track to Jeff Fuller & Friends album: