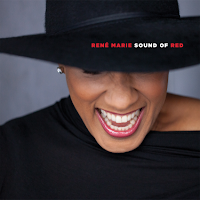 René Marie has a voice, an approach, an artistry, a fearlessness, that is so appealing - no cookie-cutter she.  A latecomer to the music industry (her debut album was issued in 1999 when she was 44), René Marie has more than made up for lost time.  "Sound of Red" is her 11th CD (her fourth for Motema Music), her first album of original songs since 2011's self-released "Black Lace Freudian Slip" (10 of 13 originals), and a continuation of her approach to telling honest stories.

This is certainly music that has been "lived in", played by her regular trio constituting of bassist Elias Bailey, drummer/co-producer Quentin E. Baxter, and her "new" pianist John Chin.  If you listen to the splendid interactions throughout, one can tell many of these songs were "worked out" on stage. "Lost" is the longest track (10:36) but moves organically from vocal to solos to "trading 4s" and has such a vitality you forget that the lyrics tell of woman tired of being used but cannot change. Each member of the group is important to the story, from the sparkling drums to the piano's rippling phrases to the bass solo that brings everyone does to earth and back to the blues.  Yet the music can't help but pick up and go back into a romp.

"Sweet songs" intermingle with pointed messages.  There's the delightful sway of "Colorado River Song" (replete with a handsome solo whistled by the vocalist) followed by "This is (Not) A Protest Song", a story about the "invisible" people in out society.  From the homeless artist to the aggressive woman with dementia to a battered woman with two children, René Marie sings that these people could be us "but for a couple twists of fate." In the background is a chorus of "gospel" voices, all supplied by Shayna Steele, and the quiet acoustic strumming of guitarist Thad DeBrock.  One of the prettier ballads is "Go Home", the story of a woman who tells her "lover" to get out of her bed and return to the person who loves him, the mother of his children - it's not that she wants him to leave but he needs to go.  With just Chin's expressive piano supporting her heartfelt vocal, this song touches one's heart.

Etienne Charles adds his trumpet and arranges the small horn section of trombonist Michael Dease and tenor saxophonist Diego Rivera to the sultry and spunky "If You Were Mine" (which one might view as the precursor to "Go Home"). Mr. Charles and company are also featured on the romping "Joy of Jazz" which tells the story how jazz developed in South Africa, a real dancing track, Chin's piano scampering atop the hot rhythm section with the horns adding support.  Romero Lubambo's acoustic guitar leads the way into "Certaldo", a love story set in Tuscany but with a Brazilian influence.  The title song features the soulful alto saxophone of Sherman Irby, digging into the funky sway of the rhythm section and making sure you understand the "Sound of Red" is rooted in the blues.

René Marie closes this recording, arguably her finest, with "Blessings", a musical benediction for the world, filled with joyous wishes for a peaceful life.  Baxter's martial drumming is reminiscent of John Robinson's snare work on Steve Winwood's "Back In the High Life Again" in the way the drums support and color the narrative, making sure we pay attention to the singer's message.  Do pay attention to "Sound of Red" because your life will be richer and brighter for the experience.

Here's René Marie with the band plus Sherman Irby on the title track: