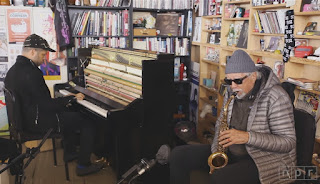 NPR does its best to keep jazz in the public's eyes and ears between "Jazz Night In America", Marian McPartland's "Piano Jazz", (now hosted by Jon Weber) and "A Blog Supreme."

On occasion, you can see and hear jazz on the "Tiny Desk Concert" series.  Among the artists who have recently played in the space behind Bob Boilen's desk (he being the creator and host of NPR's "All Songs Considered") have been Gary Burton & Chick Corea, Christian Scott, and Terence Blanchard.  This week, the series debuted a 17-minute, three song set from the duo of Charles Lloyd (tenor saxophone) and Jason Moran (piano).

Go ahead and listen as the two move through these selections with grace, poise, experimentation, and joy.