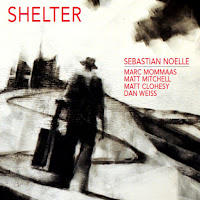 "Shelter" is his third CD for the label (fourth overall) and it, too, features five musicians. Joining the guitarist on this 10-track program of originals are Marc Mommaas (tenor saxophone) and Matt Mitchell (piano) plus the superb rhythm section of Matt Clohesy (bass) and Dan Weiss (drums). Listening through several times, the work of the rhythm section and how the piano, bass, and drums create sparks on just about every cut stands out.  Noelle's compositions and arrangements are smart, the melodies offer the rhythm section choices.  Listen to how Weiss constantly changes his accents and snare drum on the medium tempo ballad, "Another Spring" and how Mitchell and Clohesy frame the melody of "Day Off."  The rhythm section gives Mommaas such a sweet cushion on that latter track, enough so his solo feels effortless.  There is a deliberate quality during the introduction to "Mirror Lake"; then the piece goes in several different directions with a fascinating fragmented melody before a splendid solo from Mitchell (he dazzles in several solos on the album). Noelle's folk-like introduction to "Home In a Strange Land" includes Clohesy on the melody over the circular piano lines. Soon, Mommaas takes the melody, sharing the second half with the bass. Everyone but Weiss gets in on delivering the theme yet he's quite active under the tenor and guitar interaction.

The influence of Indian music is evident on "Ahir Bhairav." - Based on a classic Indian modal form, the piece gets its power and movement from the circular melody lines and Weiss's tremendous drum presence.  Most listeners know of his vast knowledge of tabla drums and Indian rhythms; on this track, he uses his trap set to lay the melody line, bouncing around beneath the powerful guitar solo while Clohesy stays tethered to the song's thematic material.  It's just so amazing to hear how the entire band states the rapid-fire melody before and after the impressionistic tenor sax solo.

"Shelter" is such a full band project. Sebastian Noelle has created music that involves his entire group and the listener.  His handsome melodies and intelligent arrangements plus the fine work of his Quintet allows the listener to "get lost" in the music, to savor the delightful rhythms and the interactions within each piece, and, ultimately, to enjoy the results.

For more information, go to www.sebastiannoelle.com.

Here's a short video about the album: 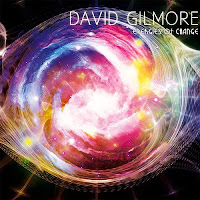 Guitarist and composer David Gilmore, a native of Cambridge, MA, is in the midst of a very busy career.  His guitar playing has graced albums by Wayne Shorter, Sam Rivers, Cassandra Wilson, Steve Coleman, Jeff "Tain" Watts, and many others as well as touring with the likes of Mavis Staples, Me'Shell N'degocello, Isaac Hayes, and Melissa Etheridge.

"Energies of Change" is not only the name of the guitarist's latest CD (released on Evolutionary Music) but also the name of the Quintet playing the music.  Recorded in December of 2010 (with additional work in November 2012), the nine originals feature the guitarist with Marcus Strickland (soprano, alto, and tenor saxophones, bass clarinet), Luis Perdomo (piano), Ben Williams (bass) and Antonio Sanchez (drums). This is a band of great soloists and leaders and they give Gilmore so many sonic possibilities.  The music can soar as it does on the fiery "Rajas Guna" with its Mahavishnu-like melody line. Strickland (on tenor) and Gilmore take advantage on the tremendous work of Perdomo, Williams, and, especially Sanchez who continually pours percussive gasoline on the musical fire. "Over Shadow Hill Way" reads like a Wayne Shorter title and even sounds like it could have come off of the great saxophonist's 1995  "High Life" album. The percussive attack of both Strickland (soprano) and Gilmore is fueled by Sanchez's inventive give-and-take while Perdomo responds with lines that ripple across the keyboard.  The drummer teams with guest Kofo Wanda (talking drum) on "Dance of Duality" to create a sensuous rhythm, aided pleasingly by Williams pulsing bass lines.  The blend of soprano sax and guitar,the percussive counterpoint of Perdomo's piano plus the percussion interaction makes this track a joyous romp.

The fluidity of the piano and guitar on the opening of "Awakening" leads the listener into what sounds like a typical world. But, surprise, there's a "straight-ahead swing" section for Gilmore, Williams, and Perdomo craft fine solos.  There is more of a gentle swing on "Sacred Pause"; after the soprano and guitar state the melody, Strickland creates a solo that flies above the rhythm section setting the stage for Perdomo's dancing solo.  Sanchez's cymbal work, the counterpoint of the bass, and Gilmore's easy chords keep the attention on the solos. The leader gets his turn as well, creating a furious dialogue with the drummer that shakes up the song but does not knock it off its moorings.  The CD ends on a fine and funky note, with the clicking guitar and rattling drums leading the tenor saxophone and piano in to "Trick Of I." Gilmore's solo is a highlight, moving from rapid-fire single-note lines to a chordal conclusion (they reappear again during the fadeout) that leads into Strickland's rapid-fire lines.

Give this album some time to sink into your mind.  Listen to how well-balanced the songs are, how David Gilmore arranges each piece so that every member of the quintet plays up to his full potential, and how Antonio Sanchez gives each track such life from his drum seat. If you enjoy guitarists like Kurt Rosenwinkel and Brad Shepik, "Energies of Change" should make you very happy.

For more information, go to www.davidgilmore.net.

Here's a video of the band from 2013 with Rudy Royston in the driver's seat: