Denny Zeitlin is equal parts pianist, sonic explorer, clinical professor of psychiatry and a practicing psychiatrist.  Born in Chicago, he first began playing piano at the age of two (!) and was gigging professionally while in high school. He settled in the San Fransisco Bay area after college and has followed his various pursuits for over five decades.


Wayne Shorter, who is 4 years older than Dr. Zeitlin, has been a professional musician for nearly six decades. He first came to critical notice when he joined Art Blakey's Jazz Messengers (1959-64) then moved on to work with Miles Davis and his second classic Quintet (1964-70) on into Davis's "Bitches Brew" period. During his years with the trumpeter, Shorter also recorded a number of highly influential albums for the Blue Note label. He went on to join Weather Report, recorded with Joni Mitchell, Don Henley, and Steely Dan (among), and, since 2000, has led his fabulous Quartet with pianist Danilo Perez, bassist John Patitucci, and drummer Brian Blade. He's also had a long and productive relationship with pianist Herbie Hancock, resulting in numerous recording dates and tours. 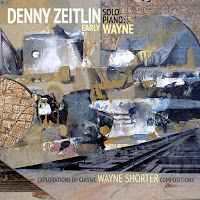 With the exception of "Ana Maria" (first recorded for Shorter's 1974 "Native Dancer" Lp) , all the tracks on Denny Zeitlin's new solo piano recording "Early Wayne: Explorations of Classic Wayne Shorter Compositions" (Sunnyside Records) date from the 1960s.  Classics such as 1968's "Nefertiti" (composed for the Miles Davis album of the same name) and 1965's "E.S.P." (also for Miles Davis) give the pianist plenty of room to explore. Shorter's melodies lend themselves to side trips as they are often rich in content.  Sometimes minimalist but never boring, Zeitlin travels through these songs, changing and mixing rhythms, going from rubato to swing and back again in the blink of an eye.  "Miyako" (from the 1967 Blue Note Lp "Schizophrenia") is a lovely ballad,given a gentle treatment yet still filled with melodic twists and turns.  Listen to the fun the pianist has on "Speak No Evil", a rhythmic tour-de-force (love that low boogie-woogie left hand) that leads into his first extended solo. How about that rumbling underneath the melody on "Toy Tune" (from the Blue Note album "Etcetera" recorded in 1965 but not released until 1980) - there's no "toying" around as Zeitlin dances through the melody, the run-away rhythm pushing the song forward but never losing control.

Recorded live in December of 2014, "Early Wayne" serves to remind the listener not only of what an impressive composer Wayne Shorter has been throughout his career but also what a brilliant interpreter Denny Zeitlin has been and remains.  This is music to play over and over as one hears more each time through the program.  Close your eyes and enjoy the shower of notes as they rain down on your mind and soul.

For more information and to listen to three of the 10 tracks, go to sunnysidezone.com/album/early-wayne-explorations-of-classic-wayne-shorter-compositions. You should also check the good Doctor at www.dennyzeitlin.com.  The album is set to be released on July 8