Been a while since I've written and I have much catching up to do.  So many events occurred, both wondrous and horrific, that music again served to boost my spirits but also heighten my anxiety as to why the world is such a crazy place.  Many of us believe that music and art breaks down barriers, allows one to look deeper into issues, root around to find how artists perceive the world and how the cooperation as well as interactions between musicians, actors, poets, playwrights, directors, photographers, videographers, and others shape our views.  The Internet offers so many viewpoints, opinions, and possible answers, with a tenuous balance of positivity and vitriol - we read and learn that truth can be so fragmented, compartmentalized, and bent in ways that draw us in or repel us. 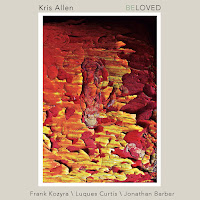 I have seen and heard saxophonist and composer Kris Allen a number of times over the past decade, most often in the larger ensembles of pianist/educator Noah Baerman.   He's yet another Hartford-based musician who was blessed by his relationship with the late educator/saxophonist Jackie McLean (the list is filled with some of the most active and creative musicians on the scene today).

For his second album, "Beloved" (Truth Revolution Records), Allen eschews the piano quartet format of his debut for two saxophone front line.  Joining the alto saxophonist (Allen plays soprano on one track) is tenor saxophonist Frank Kozyra who studied at the Greater Hartford Academy of the Arts before going on to the New England Conservatory.  The rhythm section of Luques Curtis (the bassist who played on Allen's debut) and drummer Jonathan Barber also has its roots in the Insurance City - their foundational work and flow gives the saxophonists such freedom of movement throughout the 10-song (all Allen originals).

The quartet tears through pieces such as "Hate The Game" and "Threequel" with joyous abandon, never losing focus or overplaying. The saxophonists complement each other so well with Allen skittish-boppish alto flying alongside the bluesier Kozyra, especially on the former track.  They're definitely having a conversation and neither one wants to be denied saying his piece.

The ballads also stand out.  "One for Rory" (Allen's son) is the longest track (9:10) featuring an expansive alto solo, pleasing blended reeds, an excellent melodic bass solo, and soft yet assertive percussion.  Barber stays in that quietly mode on the title track, another excellent melody on which Allen takes the lead and Kozyra enters later playing harmony and counterpoint.  The alto solo has such a "singing" quality, the clean tone, the way the phrases flow and the dynamic variation gives the music an Ellingtonian feel.  The blues-gospel-drenched "Lord Help My Unbelief" has a lovely simple melody with Barber's percussion gently and expressively leading the way while Curtis's melodic bass lines add depth to the tune. There's heat in the drum solo that closes the piece which then slides into the next track, "Flores", a rhythmic trip with a well-defined Latin flavor dedicated to the late bassist Charles Flores who played in a trio co-led by Allen and percussionist Rogerio Boccato.

There is so much music in the world today that is more based on technique and noise that one might not come across "Beloved."  You should take the time to listen to the music of Kris Allen, read about how he is a dedicated family man, a fine educator on the faculty of Williams College, and learn about his concern for the world in which we live. Such good music should not be ignored.

For more information, go to trrstore.bandcamp.com/album/beloved. 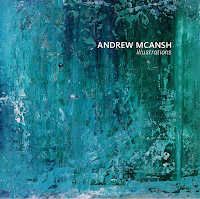 Canadian-born composer and trumpeter Andrew McAnsh is a young veteran of the international jazz scene.  During his undergraduate work at Humber College in Toronto, he worked and studied with Pat Labarbera and Denny Christianson (among others) getting the opportunity with the likes of Dave Holland, Jack DeJohnette and Terence Blanchard.  He spent some time working the Cruise Line Circuit and toured with the Global Jazz Orchestra.

His debut studio album, "Illustrations" (self-released) features McAnsh and a frontline composed of Jeff Larochelle (tenor saxophone) and P.J. Andersson (trombone) with pianist Chris Priden and drummer Ian Wright.  Bassists Steve Nissen and Wes Allen both play on five tracks each while guitarist Geoff Young plays on the same five tracks as Allen. Vocalist Mjaa Danielson appears on the first four cuts while Mara Nesrallah adds her voice to three other songs. The program opens with the two-part "Utopia" (co-composed with trombonist Andersson) - starting quietly with Pluden's piano and slowing adding the guitar, drums, bass and trumpet.  Ms. Danielson's ethereal wordless vocal moves above the ensemble as the intensity picks leading directly into "Part 2" and the leader's handsome trumpet solo.  There's more than a hint of Kenny Wheeler in the sound of the piece; it's in the counterpoint of the guitar chords and forceful rhythm section.  The two-part title track follows, opening with the brass, saxophone, and drums  playing beneath the angelic vocal. The piece easily slips out of rubato thanks to Wright's forceful drumming and Pruden's samba-like piano fills. Once the front line and voice enter, the themes blends the different voices for the theme that opens to a handsome solo section that features short interchanges between the tenor sax, trumpet, trombone and piano.  It's uplifting music, pushed by the excellent rhythm section.

Ms. Nesrallah recites poetry on "Confabulation" as the band scurry about beneath her, building in power until she intones "Know we're together anyway"; she then joins the ensemble, her wordless vocal in unison with the trumpet through to the end. The playful opening section  of "4 for 5" features a melody with terse fragments over a stop-start beat. The piece quiets down but the tension remains in the rhythm section as McAnsh plays a fine solo. Enjoy the give-and-take of Pluden and Wright at the end of the solo right before they drop for the trombone spotlight.  Listen to how they slowly creep back in and kick the proceedings up several notches before dropping back so the pianist can solo.  Pay attention to the drummer.  His activity pushes the soloists in fascinating directions.

The album closes with three impressive pieces.  Starting with the two-part "Nara" which follows s similar pattern to the other "suites", although there is a forward motion in the rhythm section (instead of rubato). "Part 2" is fairly powerful with the individual voices moving in and around the thrashing drums until a piano interlude. Pluden slows down the pace but, when the bass and drums return, the piece explodes back into action.  The final track, "Osaka", brings the album back to the Kenny Wheeler influence of the opening tracks.  The flow of the piece, how the individual voices move in and out, Allen's fundamental bass work, and the expressive drumming, all combine to end the program strongly.

The enjoyment one gets from "Illustrations" is from listening to how Andrew McAnsh moves the pieces around, how much freedom he gives to drummer Ian Wright, how he arranges the various voices of the front line, and how much pianist Pluden adds to ensemble's sound (plus his exploratory solos). All that as well as the fact McAnsh is a top-flight trumpeter makes this music worth digging into.

For more information, go to andrewmcansh.bandcamp.com/releases.
Posted by Richard B. Kamins at 3:10 PM