Michael Dease, trombonist, composer, arranger, educator, and a native of Georgia, has had quite the busy life since being accepted into the first class of jazz students at The Juilliard School in New York City.  He has toured, performed or recorded with the likes of Roy Hargrove, Christian McBride, Renee Rosnes, The Heath Brothers, and so many others.

In the past nine months, he's released two new recordings for Posi-Tone Records, his second and third for the Los Angeles based label (his first was the delightful big band date titled "Relentless.")  "Decisions" is a quintet date featuring the talents of Tim Green (alto saxophone on five tracks), Glenn Zaleski (piano), Rodney Whitaker (bass) and Ulysses Owens (drums), all leaders in their own right. The program is a delightful mix of seven originals and three "standards."  Several of the pieces have political overtones in their titles including the handsome ballads "Trayvon" and Bernard Ighner's "Everything Must Change."  The majority of the album swings with glee, from the shuffling opener "Grove's Grooves" to the funky "Jason's Gonna Get Ya" to the bluesy "Gorgeous Gwen" ( the blend of trombone and sax on the melody has a tinge of The Jazz Crusaders).  Throughout, Owens and Whitaker keep the front line on there toes without forcing the issues while Zaleski impresses with both his support and his excellent solos.  Dease has a such a attractive tone, even buttery at times, and his solos are so smart.  He navigates through the rhythm section such lyrical composure on the Harry Warren/Joe Young classic "You're My Everything" and dances with delight through "The Big D."   Green adds much on his appearances, the highlights being the expansive solo on "Right Place Wrong Time" and his high-flying turn through "Grove's Grooves."

"Decisions" is music that asks questions while reminding listeners of the joys of coming together for creative endeavors.  Give the album several listens and the music will insinuate itself in your mind and soul - can't ask for more than that.

The brand new Dease disk, "Father Figure", not only casts the trombonist in the role of leader but also mentor.  He, Glenn Zaleski (a young pro) and Behn Gillece (vibraphone) are the veterans in an ensemble that also features bassist Endea Owens, drummer Luther Allison plus alto saxophonists Markus Howell and Immanuel Wilkins.  Ms. Owens and Mr. Allison make for an impressive rhythm section throughout, her active lines not just supporting but also offering counterpoint while his cymbal work is exemplary as are his choices of when to "push." Howell appears on 6 of the 11 tracks; he has a bright sound and many of his phrases joyfully dance above the rhythm section.  Wilkins, still in his teens, seems to have a more supportive role on his 4 appearances but does get off a raucous solo on the opener "Church of the Good Hustler." Mr. Gillece appears on most of the tracks and his vibes sound mesh nicely with the different lineups on the disk. His rippling sound is a highlight on Dease's "Brooklyn", named for both the borough in which his family lives and also for his baby daughter.

There are numerous highlights throughout, among them the playful "Marian The Librarian" (from Meredith Wilson's "The Music Man").  Dease and Zaleski caress the melody as the rhythm section dances delightfully in support. That quartet return to the Broadway and Hollywood hit for a sweet turn through "Till There Was You", the melody lovingly played on trombone and followed by a jaunty solo.  Michael Howell's "The Pursuit for Inspiration" is a medium-tempo ballad with Dease and Howell playing the melody - the young alto saxophonist plays a fine, assured, solo while Ms. Owens' counterpoint stands out.  "Annette's For Sure", from the pen of trumpeter Claudio Roditi, is a sweet romp with strong solos from the leader, Zaleski, and Howell. The quintet (with Gillece and Howell but minus Zaleski) visit the blues on "Riff Raff", a sweetly-played tune from trombonist Grachan Moncur III with excellent solos all around.  Gillece takes his over the rhythm section only and it really shines.  The title track closes the album on a bop-ish note with the leader creating a snappy melody and a sparkling solo (including a sneaky quote from "Parisian Thoroughfare" at the onset.) Ms. Owens take a short but excellent break before Zaleski shows off his Bud Powell-like chops.

With "Father Figure", Michael Dease shines the spotlight on a fine group of musicians, several of whom he has worked with during his tenure on the faculty of Michigan State University. He's generous with solo time for the members of the ensemble but don't lose of the sight of the fact that he himself is a fine soloist, often with a most handsome tone. This music is a delightful way to spend the day.

Here's a video introduction to the CD and to Michael Dease as a musician and human being: 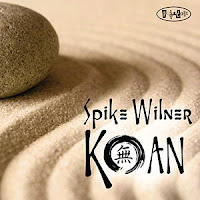 Pianist and composer Spike Wilner, a native of Manhattan, may be best known for his "night job", manager of both Smalls Jazz Club and its next-door neighbor, Mezzrow.  He's also quite an accomplished pianist and band leader; "Koan" is his 10th album as a leader and 3rd for the Posi-Tone label.  The CD, like his previous release, "La Tendresse", is a trio date, this time with Tyler Mitchell (bass) and Anthony Pinciotti (drums).  The 12-song program features excellent originals, jazz classics (including two compositions by Duke Ellington) and a pair of standards.

One can hear from the get-go that this is an ensemble who have spent a good deal of time working together and listening to each other.  When they "swing", as they do with a vengeance on Tadd Dameron's "Hot House" or gently on Wilner's "Iceberg Slim", the three musicians do so in service of the melody and with the joy of improvisation.  The Ellington works, 1940's "Warm Valley" (revived on Duke's trio date with Max Roach and Charles Mingus) and 1938's "Gypsy Without a Song", have such expansive melodies, the former with its gentle melody that stretches over several verses and the latter with a Latin tinge and gentle swing.  One of the more experimental works is the leader's "Monkey Mind", which starts gently but Wilner begins adding sheets of notes over chattering percussion and intermittent bass lines.

The final three tracks bring the session to a close on quite a high note. "Young at Heart" (the melody composed by Johnny Richards) opens quietly with Wilner playing the melody slowly (his left hand sounds, early on, like Vince Guaraldi's left hand "Cast Your Fate to the Wind"). After the rhythm section enters, the energy slowly picks up but the pianist's solo is a series of variations on that melody.  Next is the trio's impressive exploration of Ornette Coleman's "Lonely Woman" (certainly the late saxophonist and composer's most oft-recorded work.)  Wilner's left hand, along with Mitchell's bass lines, not only really swing but there are moments, especially after the bass solo, when the music has a folk music feel. The inventive nature of the trio's interactions push the piece forward right up to the drum solo and, after that, it's back to the theme.  The album closes with "Blues For the Common Man", a Wilner original that takes its theme from Aaron Copeland's famous "Fanfare...."  After a formal opening with Copeland's melody, the piece drops into a slow blues a la Percy Mayfield.  The pace picks up several notches during the piano solo that juxtaposes familiar phrases with long, flowing, single-note runs.  Right before the close, the trio slows down, Wilner takes more of a gospel tack (big, bold, chords) and the music and come to a satisfying close.

"Koan", as a musical meditation, works well in the early morning and late at night, windows open, the sounds of the outside either waking up and quietly disappearing.  Spike Wilner has such a creative  mind, teasing idea out if songs one might think have been wrung dry over the years.  This is a great program to enjoy from start-to-finish and I heartily recommend that you do.

For more information, go to www.spikewilner.com.

Here's Spike Wilner in his home setting with Anthony Pinciotti and Tyler Mitchell from March of this year: